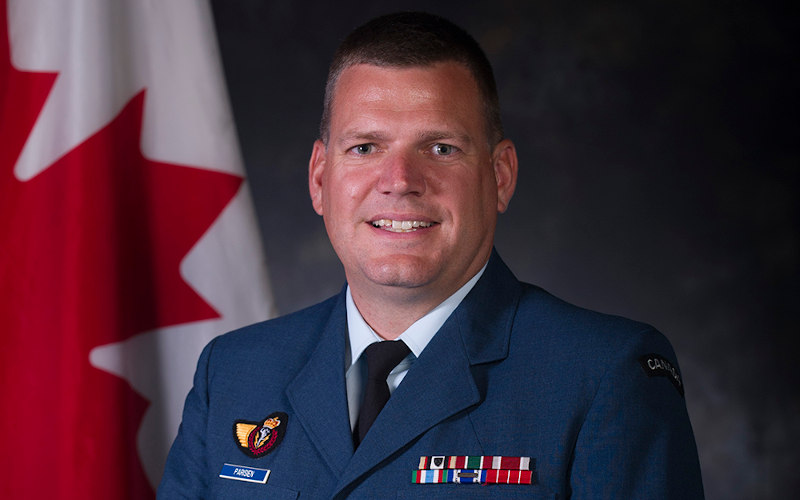 Lieutenant-Colonel Guy Parisien in August 2020 became Wing Commander at 5 Wing Goose Bay where he is responsible for the base and operations in the entire Labrador region. (Photo: Royal Canadian Air Force)

Lt.-Col. Guy Parisien has lived in many places. He grew up in a military family, travelling all over Canada before joining up himself at the age of 24. Since then, he’s been posted from one end of the country to the other, with stints overseas in Afghanistan and Kosovo.

However, before now, one part of Canada he hadn’t really experienced was Labrador.

That changed Aug. 5 when he took command of 5 Wing Goose Bay, making him responsible for the base and operations in the entire Labrador region.

The Big Land offers a paradise for an outdoor lover and Parisian is excited to dive in. A fan of high-speed outdoor sports, Parisien can’t wait to witness the next Cain’s Quest snowmobile endurance race and is looking forward to getting out onto the land himself.

“I was told to take advantage of my time here and to embrace the lifestyle, so that’s what I plan to do,” he said. “I’m sure it’ll be interesting.”

2. Where and when were you born?

3. Where do you live today?

4. What’s your favourite place in the world?

I’ve travelled a fair bit over my career, and I have to say it’s always nice to come home ? as I’ve lived a pretty transient life as a military dependant. Home for me is a family cottage that has been in my wife’s family for a couple of generations, just north of Kingston (Ont.), on a small lake.

Lots of friends and family through Facebook, but I largely use it to keep in touch with other military members, people I have worked with over the years, or colleagues I’ve made on courses. Social media is a great tool for shaping the world and keeping your circle of friends close, even when you’re engaged in a transient business like the military.

6. What would people be surprised to learn about you?

That’s a tough one. Perhaps how much I like to do home renovations. I know typically (that) cause stress for people, but I’ve always found it to be quite soothing, perhaps therapeutic, when you’re ripping things out and replacing and making things new again. Ironically, I live in a PMQ (military housing) where I don’t own the home, so I won’t be doing that kind of work for the next few years.

7. What’s been your favourite year and why?

The year 2000 was an exciting year for me. I had recently graduated college and was employed in Ottawa, breaking out on my own, as it were, as an adult. It was also the year I married my wife, purchased my first home, got a big promotion at work. It was a fantastic year, formative in terms of building my craft in my adult life. Although I wasn’t in the military yet, some of the skills I learned at that age would pay dividends in my military career.

8. What is the hardest thing you’ve ever done?

In 2006, I was deployed to Afghanistan. It was a particularly difficult time. We had significant Canadian casualties in that conflict, but one day stands out in particular. We had five Canadians killed in the attack and three days following, we had a ramp ceremony with the five being repatriated back to Canada. Although there were a number of ramp ceremonies, that was probably the hardest as the spouse of one of the military members was in the parade with us, with her receiving the casket and escorting it home. That was perhaps, emotionally, the hardest day of my life. That mission, in general, was very difficult. While it was rewarding, knowing you’re supporting your country, it was physically, mentally and emotionally challenging.

9. Can you describe one experience that changed your life?

I was deployed in Kosovo as a member of a mentoring liaison team and meeting with my counterpart in the Kosovo security force, the head of the development of a signals branch. Interacting with him in the development of a new defence capability and paving the way for their country to declare independence was very important to me? was incredibly rewarding. It also allowed (for) introspection on what I was doing. We all have a goal in our lives and we struggle to know whether we’ve taken the right steps along the way. That mission (in 2012) solidified in my mind I had made the right decisions in my life to that point. I found it to be extremely rewarding to be helping a group of people trying to forge their own nation. The small role I played was formative in cementing in my mind I was on the right path. I was no longer questioning whether I was doing the right thing with my life.

11. What is your favourite movie or book?

My favourite movie is “The Shawshank Redemption.” I always liked how cerebral the main character was, despite the circumstances he found himself in… the way he was able to use his superior intellect to find a way to deceive and escape and remain mentally resilient, even when he had the knowledge he was falsely found guilty of a crime he didn’t commit.

I like sports of all kinds, but what I find most relaxing are power sports — wakeboarding, downhill skiing, or snowmobile or ATV riding. I’m a sucker for high-speed, high-impact activities of that nature. I truly love that stuff, I think its the adrenaline rush while you’re doing it and the dump, the exhaustion, at the end.

13. What are you reading or watching right now?

14. What is your greatest fear?

Honestly, I’m not really good with heights. I have a bit of an issue with heights even though, ironically, I’m in the air force. I don’t have any issues when I’m in an aircraft ? I have an issue at about 30 feet. Perhaps the most gripping fear I ever had was on a rappel tower in basic training, walking up the ledge, turning around backwards and letting myself off the edge of a 35- to 40-foot tower. It’s exhilarating and frightening at the same time.

15. How would you describe your personal fashion statement?

That’s a tricky one, I spend a lot of my time in uniform, which is just fine by me. For the last 20 years, what I’ve been wearing has been kind of laid out in front of me. I did pay my way through community college by selling suits in Kingston. Perhaps in my younger years, I had more of a fashion sense than I do now, but I feel comfortable putting on a suit or a sportscoat and tie. At home, (I like) to wear comfortable clothes. A nice worn-in pair of jeans and a shirt feels like a tuxedo to me.

16. What is your most treasured possession?

As a military family, we move a lot, so we try to be minimalist with the things we bring with us. If I had to pinpoint one thing, I’ve got a challenge coin collection that has been growing over the years. Whenever I look at it, I remember all of the military individuals I’ve interacted with, the different units I’ve participated with, or the different deployments I’ve been on. I’m not sure how many I have in the collection, but it’s got to be somewhere around 50 or 60, and each one has a story tied to it.

17. What physical or personality trait are you most grateful to a parent for?

I have to be thankful to my dad for my height. I’m 6-2 and I remember I was in high school playing volleyball or basketball and my coach telling me, “you know Guy, you may not have a lot of physical gifts in terms of coordination, but you can’t teach height.”

18. What three people would join you for your dream dinner party?

If I can perhaps dive into the fantasy world across time, probably some great adventurers: Neil Armstrong, the first man on the moon, Genghis Kahn, who conquered great parts of the world and had a great mind for the logistics associated with moving people and conducting war over vast regions, and maybe a politician for interest — John F. Kennedy. Wait, maybe I should have my wife in there somewhere.

My best quality would be I’m hardworking, I’m not afraid of a challenge. My worst quality is probably related to that. Perhaps I’m over committed to things I’ve been tasked with. My wife would say I’m unreliable in getting home on time at the end of the workday. I’ll tell her I’ll be home by 5 p.m. and help make dinner ready, but my dedication to work will sometimes see me coming in around 6:30 or 7 when my plate has gotten a bit cold and put in the oven. Perhaps my dedication to work from a professional perspective is a strong trait for me, but from a family-balance perspective is working against me at times.

This one is tough. It’s not the first time someone asked me. As I indicated before, I grew up in a military family (and) as a teenager I decided I wasn’t going to join the military. I went through community college — I was the only one in my family that didn’t go through military college — and then had a career in the high-tech industry before joining the military. Even though I learned a lot through that process, if I had gone to military college and joined right away, I would be six or seven years closer to retirement. In some regards, I’m regretful I didn’t follow the family business from the outset, although having gone to college and worked and lived on my own helped me with the “grass is greener” issue many military people have.