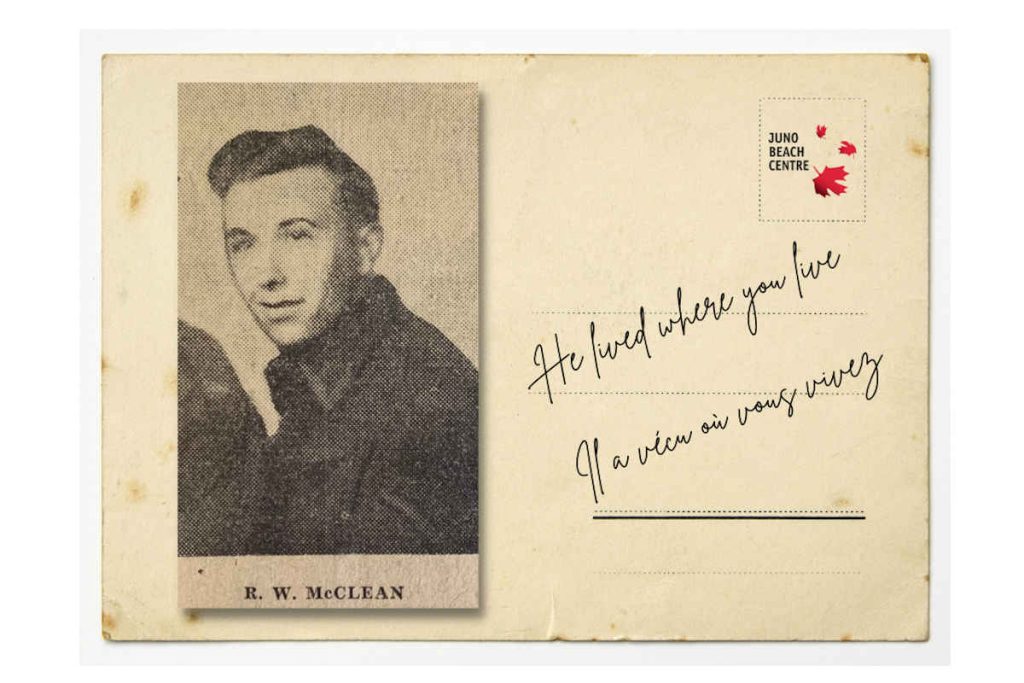 In 2021, the Juno Beach Centre cross referenced the home addresses of the more than 800 Canadians who perished during the Dieppe Raid in WWII with contemporary addresses. About half of the addresses still exist and, at the end of July 2022, each was mailed a unique postcard that shares the name and story of the soldier of Dieppe who lived there at the time of his enlistment. (Image: Juno Beach Centre Association)

Paris Eakins was 26 years old when he joined the Royal Canadian Air Force in November 1940 during the Second World War.

He was born in Minnedosa, Man., where he lived until he attended the University of Manitoba, graduating with a bachelor of arts degree. Eakins worked at his town’s newspaper and went on to join the sports department at the Winnipeg Free Press.

After he enlisted, Eakins worked his way to become a pilot officer in a fighter squadron based in England in 1941. The next year, he was killed in northern France during the disastrous Dieppe Raid. He was 27.

Eakins’ story is featured in a Canadian postcard campaign ahead of the 80th anniversary of the raid on Friday.

The Juno Beach Centre Association has sent 400 unique postcards to addresses across the country that share the name and fate of a serviceman whose records show once lived in those places.

“(We) encourage people to take a moment to consider the anniversary, to consider what happened to this individual who lived in their home or very nearby to them, 80 or more years ago,” said Alex Fitzgerald-Black, the association’s director.

The Dieppe Raid, known as Operation Jubilee, on Aug. 19, 1942, was the Canadian Army’s first major combat against Nazi Germany.

Canadian and British troops landed on beaches near the German-occupied French port with a mission to capture the town, destroy the port facilities and return to England with information that could give them an advantage.

Instead, the raid backfired and Operation Jubilee became Canada’s bloodiest day of the Second World War.

“It was the Canadian Army’s baptism of fire against Nazi Germany during the war. Unfortunately, it was a deadly failure,” said Fitzgerald-Black.

About 5,000 Canadian soldiers took part in the raid. In less than 10 hours of fighting, more than 800 died, with about 100 more later succumbing to their injuries. About another 2,000 became prisoners of war.

Preparations for the postcard campaign began at the end of last year. Employees and volunteers at the association went through the service files of those who were killed to see if they could link their old home addresses to a current one.

They were able to develop a list of addresses for half of those who died. The list skews toward addresses in urban settings because those who were from rural areas couldn’t be reproduced, said Fitzgerald-Black. Many went to cities in southern Ontario, as well as Montreal and Winnipeg.

The association also produced a temporary exhibition honouring the anniversary in Normandy, France.

A delegation of federal ministers, veterans, representatives of veterans and Indigenous organizations, and members of the Canadian Armed Forces travelled to France this week to take part in events marking the anniversary.

Three of the veterans participating served in the Second World War, including a survivor of the raid.

“It’s vitally important that we continue to recognize and honour the extraordinary service and sacrifice witnessed 80 years ago on the beaches of Dieppe,” Lawrence MacAulay, minister of veterans affairs, said in a release.

“As the living memory of this seminal moment fades, we as Canadians must ensure that the legacy of those who served Canada is never forgotten.”

Stories like Eakins’ have made an impression on Fitzgerald-Black.

He hopes the postcard project will help Canadians remember the people who died serving their country and those who survived.

“They’re not going to be around much longer to share these stories — the stories of their comrades who were killed during the raid,” he said.

“And so we hope that Canadians will continue to take up the torch to do this into the future.”