News
A chance for a sunny future

To say Sunwing Airlines started on a wing and a prayer 10 years ago wouldn’t be too far off the mark. For one thing, on the day before its inaugural flight from Toronto’s Pearson to Santiago de Cuba on Nov. 10, 2005, its first aircraft from XL Airways was still in the U.K. It arrived just in time to meet the scheduled departure. 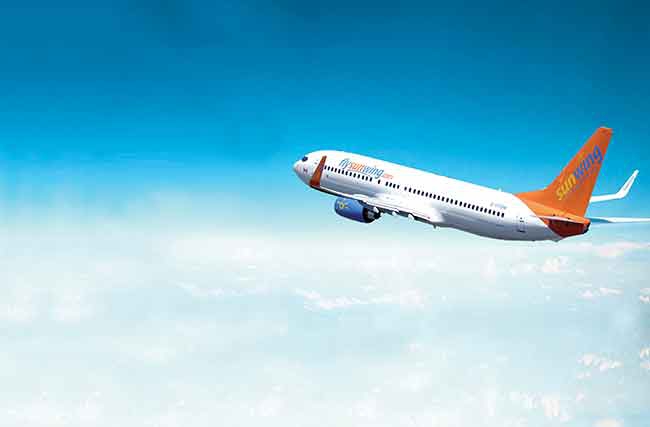 Sunwing Airlines continues its ascension in the lucrative tour operation business. To say Sunwing Airlines started on a wing and a prayer 10 years ago wouldn’t be too far off the mark.

As well, the aircraft was over the maximum takeoff weight before heading for Cuba as some passengers brought some items intended to be left behind for some Cuban citizens. And it was touch and go whether Transport Canada (TC) would sign off on the startup before the launch date. To top it all off, the airline couldn’t even find a Cuban band to serenade the first passengers and had to settle for a Mexican one minus the sombreros.

This story was shared during a presentation to Air Transport Association of Canada’s national aviation conference and tradeshow in Montreal Nov. 2-4 by Mark Williams, president of Sunwing Airlines. But the Sunwing story started a year before its first flight, when Williams convinced brothers Colin and Stephen Hunter that Sunwing Vacations was big enough to start its own airline instead of using a third party to fly its customers, So, Sunwing Vacations’ in-house airline began with two Boeing 737-800s.

As a result, the airline got to focus on operations and needed less startup capital since it joined forces with Sunwing Vacations, said Williams. From that underwhelming beginning in 2005 with one aircraft, 60 employees and $200 million in revenue, Sunwing has mushroomed into a $2.2 billion business with more than 2,000 employees and 38 aircraft. Almost 100 per cent of the boom was from organic growth funded by internally generated cash flow.

“We are the largest vertically integrated tour operator in North America with 35 Canadian gateways and 48 destinations in 21 countries,” Williams said. “We own the customer from beginning to end and make margins each step of the way. We’re growing the business in all parts of Canada and we are the largest provider of tourists to Cuba in the world.”

Sunwing has two U.S. based aircraft and uses the Canada/U.S. Open Skies agreement to fly Americans to the Caribbean and Mexico using Canadian aircraft and crew. Under its various subsidiaries, including Blue Diamond Hotels and Resorts, Sunwing owns or manages more than 13,000 hotel rooms and is spending $500 million this year to build four more hotels.

Even with the liberalization of relations between the U.S. and Cuba, Williams believes Sunwing is well positioned for any new competition with 12 hotels that it manages in the communist country. “In the first 10 years, we’ve been hit with fuel spikes, swine flu, earthquakes and a weak dollar. What have we learned? That we need to be conservative, fight our way through and never give up. Very few people hit a home run in this business, but you get such an adrenalin rush.”

And the next 10 years look like nothing but blue skies ahead. “We are well positioned to continue to grow as private company,” said Williams.

An eye on security
The luncheon keynote speaker on Nov. 3, 2015 was Angus Watt, president and CEO of the Canadian Air Transport Security Authority (CATSA). Watt told the group that wait times at airport security have deteriorated since 2012 from an average of 15 minutes 97 per cent of the time down to 85 per cent of the time, partly due to a budget freeze and an increase in travellers. However, Ottawa did inject $26 million into the budget to keep wait times down.

“The key to success is collaboration with airlines and airport authorities,” Watt said. “Another example is non-passenger screening which is the reality of the world today. In 2012, we spent $15 million but it will increase to $115 next year.”

The agency is replacing its older cargo hold bag screening machines at airports at a cost of $650 million over the next 10 years and it is halfway through upgrading from a Level 3 to Level 5 screening process.

“Another key to our success is innovation,” said Watt. “We’re not early adapters of new technology, but we’re ahead on scanning through smartphones to validate boarding passes. A lot of stuff is left behind (in airports) which we can track to passengers before they board, avoiding a breach of unloading baggage.

A new system has four or five different points for passengers to empty their pockets and has harmonized the Trusted Traveller advantage where passengers can keep their shoes and jackets on.

As well, CATSA Plus is being introduced in Calgary where a $2 billion terminal is being built. The new security checkpoint will be a high-performance checkpoint for a better passenger security experience, according to Watt. The security screening process will feature a continuous moving belt, including a bag diverter which can divert a bag for additional screening without holding up other bags on the belt.

A look to the future – commercial aviation trends
ATAC outgoing Chair, Tracy Medve, president of KF Aerospace, kicked off the association’s 81st annual meeting with a summary of the year’s major events. She is being replaced by Heather McGonigal of Transwest Air.

At last year’s annual meeting, oil was trading at around $95 a barrel and the Canadian dollar was at 88 cents U.S. Today, oil is under $30 a barrel, while the Loonie has dropped below 70 cents. Also in 2015, a Germanwings aircraft was deliberately crashed into the French Alps in March, in an apparent suicide by co-pilot Andreas Lubitz. On July 1, 2015 both Air Canada and WestJet recorded their largest single day in terms of traffic, while Bombardier received $1 billion U.S. from the Quebec government to prop up its ailing C Series program. Meanwhile, there were 503 reported laser strike incidents, a 43 per cent increase in two years.

“Special Flight Operating Certificates for drones have risen from 345 in 2012 to 1,672 in 2014 and the number of incidents investigated rose from three to 39 in the same time period. Each of these events will have an impact on our industry and will require our close attention as an association,” Medve said.

And while many things have changed, other things haven’t, despite years of lobbying efforts by ATAC, making the industry uncompetitive, she added. “For example, Canadian fees and taxes account for about four per cent of the difference in the price of an airline ticket in Canada when compared with travel in the U.S.  Canada ranks 125th out of 139 countries for ticket tax and airport charges.”

Rents paid as of 2012 are estimated at more than $5 billion and the money goes into the public treasury. Despite these rents, the government provides no subsidies to the airports. So over and above these rents, airports must rely on landing fees, airport improvement fees and other sources of revenue such as parking and commercial space rent to fund airport maintenance and improvements. And despite all these investments and improvements, market share has not grown. Instead, an estimated five million passengers have opted to fly out of U.S, airports each year, resulting in some 9,000 job losses and $1.1 billion in lost economic activity annually, Medve pointed out.

In addition, revenues from the Air Travellers Security Charge are greater than ATSC expenditures, resulting in an estimated surplus of $258 million that continues to end up in Ottawa’s general coffers.

“We need to more directly tie CATSA funding to revenues from the ATSC,” Medve said. “And our policies need to insist that CATSA is a service provider to the Canadian public with high standards for service delivery in terms of maximum wait times. We believe it is the government’s responsibility to maintain a tax and regulatory environment favouring the competitiveness of Canadian air carriers. Our current regime is not competitive. But the situation has not been the fault of any one government.”

There have been 13 years of Liberal government and 10 years under the Conservatives since airports were transferred to private operators in 1992 and the Transport portfolio has not always been a top priority for the government.

“Only time will tell whether we can garner the attention of the Trudeau government, given the long list of priorities they presented as their election platform,” concluded the outgoing chair. It will be a safe bet that Marc Garneau, the new minister of transport, will be hearing from ATAC on a regular basis.


Related
At The Gate: A sunny proposition
Raitt reiterates importance of keeping travellers safe
CATSA adds Dufour to Board of Directors
On Final: Growth of Canadian airports