Anyone who frequents air shows in Canada has most likely experienced Bill Carter’s impressive and precise show. 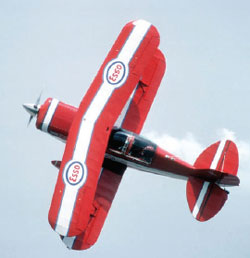 Anyone who frequents air shows in Canada has most likely experienced Bill Carter’s impressive and
precise show. He started air-show performing in 1989 with a single-seat Pitts – CF ALR. Since then he has flown in 72 villages, towns and cities from one coast to the other in Canada and has not missed a single season. Bill is one very few pilots in Canada to have held a ‘Cleared to the Surface’ waiver from Transport Canada. He is also one of only four Aerobatic Certification Evaluators for the International Council of Air Shows (ICAS) in this country. His show routine has always been known for its tight timing, crowd orientation (always in view and within the show arena), display style and, most important, consistency and value as an act to event organizers.

At age 57, Bill currently serves as B767 captain on domestic and overseas duty with Air Canada. To date, he has amassed 26,000 hours of aircraft flight time – which, as he points out, is equivalent to three continuous years, 24/7, of sitting in an aircraft cockpit! Bill and Judy have been married for 37 years and they have two grown sons. Their youngest, Darrin, is following the family tradition, flying as copilot on King Air 100 and 200 aircraft for Northern Air Charter out of Peace River, Alberta.