Features Operations
A Look Back: CL-44 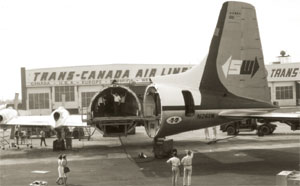 If imitation remains the sincerest form of flattery, designers and
manufacturers of the Bristol Britannia turboprop should be very
flattered indeed. For this airliner would become the platform for the
Canadair CL-44, built in Montreal under licence from Bristol. But while
the Britannia was charged with the glamorous task of whisking
passengers across the globe in unprecedented speed and comfort, the
CL-44 was given much more mundane tasks such as freighter and patrol or
transport aircraft for the RCAF.

First
in line was the maritime patrol version, renamed the Canadair CL-28
Argus. The RCAF initially placed an order for 13 CL-28s (no
superstition in the military), which retained much of the Britannia’s
heritage except for a redesigned, unpressurized fuselage with weapons
bay and more powerful turboprop engines. The RCAF went on to order an
additional 20 aircraft, retiring the Argus in 1980. Meanwhile, Canadair
looked for other uses for the airframe, offering a transport version to
the RCAF to replace its ageing North Star fleet. In January 1957 the
RCAF placed an order for eight CL-44 Yukon transport aircraft, later
increasing the number to 12.

It was not until the first test
aircraft was ready to be rolled out that red-faced Canadair employees
discovered that the tail was too high to permit an exit. The CL-44 flew
for the first time in 1959, and entered service with the RCAF in 1961.
With only 12 orders, Canadair sought to extend the CL-44 production run
first by offering an airliner version similar to the Britannia – a
short-lived prospect given the anticipated arrival of commercial jets –
and then a freighter highlighted with an innovative hinged or swing
tail. This enabled the entire tail section to swing to one side
permitting simplified loading. Designated the CL-44D4, the swing tail
was economical to fly and its unique loading system widely admired.

But
while the aircraft realized fame, fortune was harder to come by. Only
39 CL-44D4s were produced. In an ironic twist, Canadair was negotiating
in 1958 to sell $100 million worth of aircraft including the CL-44 to
South America on condition that the company built a factory in Brazil.
The project never reached fruition, but Brazil went on to develop its
own aircraft industry which today is the chief competitor in the
regional jet market with Canadair’s successor, Bombardier.

In
the late 1960s, Loftleidir Icelandic Airlines operated four ‘stretched’
passenger versions of the CL-44D4 over the transatlantic route (the
aircraft was dubbed the Rolls-Royce 400 JetProp in a marketing effort
to compete with the Boeing 707 and DC-8). In 1969, an American company
enlarged the width of a CL-44D4 to accommodate oversized cargo. Only
one conversion was ever made. The guppy-like freighter – nicknamed
Supermonster – flew for a number of airlines well into the 1990s.