The Beaver’s reputation for quality extended far beyond the borders of Canada. 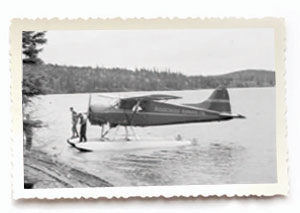 When de Havilland Canada entered the design business after the end of
World War II, its first creation, the Chipmunk, was an instant hit.
Designed as a low-winged training aircraft in the 1940s, there are
still numerous examples of it being flown. The next aircraft to come
off the company’s drawing boards, the Beaver, took a 180-degree turn in
design philosophy and, like its predecessor, gained lasting fame
throughout the world.

The
Beaver first took to the air on August 16, 1947, a year following the
first flight of the Chipmunk. It was designed as a bush plane, had STOL
characteristics and could be flown with skis or floats as well as the
normal wheels. It was rugged to the extreme, could carry a useful
payload and right from the beginning was put to work in the Canadian
North. It was powered by a reliable Pratt & Whitney 450-hp engine
and this combined with the sturdiness of the airframe made it an
instant flying favourite. Like the Chipmunk, the Beaver’s reputation
for quality extended far beyond the borders of Canada; at the height of
its fame it was in use in over 60 countries. However, by far its
biggest single coup was to attract the attention of the US military.
After a demonstration flight in Alaska, Washington signed a contract
for no fewer than 978 Beavers.

This was and remains the largest
single foreign order for a Canadian aircraft and constituted over 50%
of all Beavers built. Many of these American ordered aircraft are still
flying, having been purchased from the military by private operators.

Some
400 remain in operation in Canada, a number of them having been
upgraded with a turboprop engine to become Turbo-Beavers. As if the
large order from the US was not enough of an accolade, the Beaver was
chosen by the prestigious Association of Industrial Designers as one of
the best designs of any category to originate in Canada. All this when
the aviation industry in this country was still in its infancy.

Furthermore,
when the plane was first offered to the aviation market, the asking
price was in the vicinity of $40,000. Forty years later a Beaver in
good condition can be had for no less than ten times the initial value.
Accolades indeed for a plane that set the standards for any similar
aircraft that were to follow.