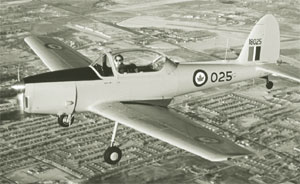 The Chipmunk is the only one of the aircraft examined in this series to
have its genesis in the period immediately following World War II, but
it was not entirely a shot in the dark. De Havilland Aircraft of Great
Britain felt a replacement for the venerable Tiger Moth trainer was
overdue. With the advent of the jet age, change was definitely in the
air.

In
fact, it was mainly due to the jet age that the British parent company
found its design book full – including preliminary work on the de
Havilland Comet.

Accordingly it passed the design of a new basic
trainer over to its Canadian subsidiary at Downsview Airport in
Toronto. The first flight being made on May 22, 1946. Creation of the
new aircraft is credited to W.J. Jakimiuk, before the war a chief
designer at PZL of Poland.

What came out was a light, agile,
low-winged twoseater with tandem seating and powered by a 145-hp Gipsy
Major 8 engine. De Havilland Canada may not have realized it at the
time, but in choosing the name ‘Chipmunk’ for its initial postwar
creation, it was setting the practice of selecting for its aircraft
names of wellknown Canadian animals. But the later ones, the STOL
Beaver, (Twin) Otter, Caribou and Buffalo, went off to gain
international fame in an entirely different direction.

The
Chipmunk did have one thing in common with its later and bigger
relatives. It, too, achieved immediate international success in that it
was chosen by the Royal Air Force, as well as the army and navy, and it
was in Britain that the aircraft enjoyed its most widespread use. Not
that it was ignored in Canada; the RCAF quickly showed its approval of
the new aircraft. By the early 1950s the Chipmunk was in use training
fledgling pilots on both sides of the ocean. Production in the two
countries totalled 1,000 and 217 respectively.

The Chipmunk was
also immediately selected by the Danish Air Force as its initial
trainer, while a goodly number were subsequently exported from both
Canada and Britain to other air forces.

Portugal went further
and obtained a licence to produce the Chipmunk for its air force. The
last of 60 models to come off the Portuguese assembly line marked the
end of production of Canada’s first postwar success. But it was not
until 1995 that the RAF terminated use of the versatile trainer.

A number of Chipmunks have remained in flying condition throughout the world to this day.

It
has been said that the tail of the Chipmunk was borrowed from the de
Havilland Mosquito, one of the most famous and versatile of World War
II aircraft. You be the judge!