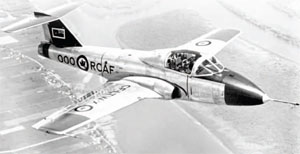 What happens to aircraft when they go off to die? With a private owner,
that will depend on the circumstances. In the case of the Canadian
Forces, the final destination is frequently a little-known military
airfield at Mountain View, a satellite field of Trenton, ON, some 20
kms to the northwest.

Let’s
take a look at the life span of one type of aircraft, the Tutor, that
has found its way there after its years of service with the CF are
over. The plane was designed from the outset as the first jet trainer
for the RCAF. Called the CT-114 Tutor, it made its appearance in 1963.
Before production terminated at Canadair’s plant in Montreal in 1967,
190 Tutors had been handed over.

What is not nearly as well
known is that Canadair also produced a variation of the same aircraft
for the Malaysian Air Force. A dozen of this type, used for ground
attack purposes, served for a number of years in that country’s
military forces. Canada never bought into this version.

Given
the long life span of the Tutor, it is obvious that it has fit
extremely well into the CF’s training syllabus. It features
side-by-side seating, unlike the tandem layout used by most trainers.
The engine, a 2,700-lb thrust turbojet, was produced under licence by
Orenda Aerospace, a name that readers will recognize in connection with
the CF-100.

But the best known use of the Tutor is in connection
with the Snowbirds, a CF display team that has been a fan favourite at
air shows both in Canada and the US. In 1971 it gave its first
demonstration of precision flying in Saskatchewan, a logical choice
since the unit was and still is based at CFB Moose Jaw. It has been
given squadron status and is now known as 431 Air Demonstration
Squadron.

That the Tutor is long in the tooth is not denied, but
the aircraft soldiers on, being the recipient of thorough maintenance
on a par with that of the Swiss Air Force. There has been talk at times
about replacing the venerable aircraft but so far that has remained in
the verbal stage.

Where do old Tutors go to die? Why, to
Mountain View, of course. But Mountain View does not have the total
quietness of a traditional resting place. Glider training of the Royal
Canadian Air Cadets, among whom one of the most illustrious students
has been astronaut Chris Hadfield, can be seen and heard in the
background during the summer. And more activity is in store; an unpaved
runway is being built beside the asphalt one to give military pilots
practice using out-of-the way places.

The story of this aircraft
and its resting place merits publication especially now, given that the
Tutor is currently featured on a 51-cent Canadian stamp.