A look at the CF-100, which gained fame as the first Canadian designed and built fighter aircraft. 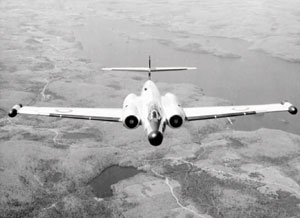 In the last edition we featured the Curtiss Jenny Canuck, the little
known but widely used World War I trainer. It is now the turn to take a
look of the far better known Canuck, the CF-100, which gained fame as
the first Canadian designed and built fighter aircraft. It would never
break any speed records but it was sturdy and met the needs not only
for domestic defense but also for an all-weather NATO fighter in Europe
where it served with the Belgian Air Force as well as the RCAF.

The
Canuck or “Clunk” as it was more affectionately called, was the product
of a post-war request for Avro Canada to develop a new all weather
fighter. The RCAF had already chosen the Vampire to be its first jet
fighter, as the days of piston driven fighter aircraft were coming to
an end. The power plant chosen for the new creation was the Orenda,
another Canadian design and the first flight was made in 1950.

It
was a twin-engined affair and, as the Orenda engines were not yet
ready, a pair of Rolls-Royce Avons were substituted. Two years later
the first Orenda-powered squadron of CF-100’s, flying Mark 4’s the
official designation of the plane, was formed at RCAF Station North Bay.

A
later version, the Mark 5, was produced and 50 of the Mark 4’s were
modified to the 5 standard. Included in the later version were the 53
sold to the Belgian Air Force. In all, a total of almost 700 were
turned out and, at the height of its service, no fewer than 13
squadrons were equipped with the aircraft.

The CF-100 used the
Lead Collision Course mode of attack. W/C Cliff Aikens, who flew as a
navigator in the aircraft, explains that the CF- 100 attacked at right
angles to the intruding plane. Regardless of the speed of the intruder,
it was the task of the radar station controllers to set up the attack
path. The plane’s fire control system took over and then signaled the
right moment to fire the rockets. After the firing, the LCC programmed
the CF-100 to pass behind the intruding aircraft.

The CF-100 was
finally retired in 1981 after almost 30 years of service. Among the
honours of the Clunk was to be the first non-British military jet to
perform in 1955 at the Farnborough Air Show. It is also fitting that
the CF-100 was the first straight-winged aircraft to exceed the speed
of sound – albeit in a dive. The pilot? Jan Zurakowski!


Related
CF-100
A Look Back: The First Canuck
100 years of powered flight in canada
RCAF to introduce new colours in Toronto ceremony