The number of pilots who have flown on the ubiquitous Piper J-3 Cub is probably too great to be known with any degree of certitude. 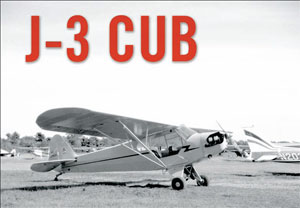 The number of pilots who have flown on the ubiquitous Piper J-3 Cub is
probably too great to be known with any degree of certitude; the
genesis of this aircraft was even earlier than that of the famous
Douglas DC-3. The little two-seater, that is as close to viceless as
any aircraft can be, first took to the air in 1931 and is still around
in considerable numbers over 70 years later.

The
Cub had its beginning in a small aircraft built in the 1920s by C.G.
Taylor. The plane, called the Kitten, was badly underpowered and the
whole project was eventually taken over by Piper Aircraft which kept
the designer on as chief engineer. A more powerful engine, the 37-hp
Continental A-40, was installed and the plane marketed as the Taylor
E-2. That still wasn’t good enough, although some 200 had been sold by
1935. Shortly afterward the plane was redesigned and the horsepower of
the Continental engine was gradually increased from 40 to 50 and
finally 65. At the same time Taylor left Piper Aircraft and the
aircraft was subsequently marketed as the Piper J-3 under which name it
gained fame and fortune. Like almost every other airplane at the time
the J-3’s career was influenced by World War II. Given its easy
handling the Cub was quickly introduced as a trainer in the US and in
1940 Piper Aircraft, which had taken over an unused textile mill in
Lock Haven, Pennsylvania turned out no fewer than 3,016 with one coming
off the assembly every 20 minutes. Before the war came to an end, over
6,000 J-3s were produced for various branches of the American military.

But
its reputation was not long confined to the US. Fame and use of the
plane quickly spread to Canada where it was used by thousands of
Canadian pilots in pleasure and commercial roles. Its benign
characteristics meant that it could be landed on even the shortest
strips and its low cost of operation made it a favourite of those
pilots with less than Croesus-like pocketbooks. It took you to your
destination at a leisurely pace that allowed both pilot and passenger
to enjoy the scenery.

When the J-3 went out of production in
1946, over 14,000 had been produced. Three years later it was followed
by the Super Cub; this continued in production until 1981. It had a
slightly higher speed, engines as high as 150-hp, and was also used by
the military.

So popular is the Cub that it is still being produced by home-builders.

Unfortunately,
demand has out-flown supply to the point where the base price has risen
considerably beyond what many pleasure flyers can afford. One thing is
certain – the Cub will be seen in Canadian skies for many decades yet
with pilots still able to experience its kittenlike qualities and
Scrooge gas consumption.