News
A Look Back: The Harvard

This military trainer has a 70-year history; over 20,000 were built and some are still in flying condition. 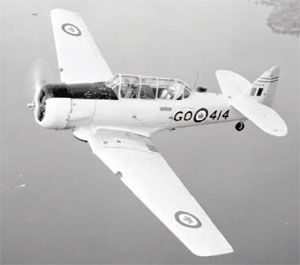 It was said that you knew a Harvard was in the vicinity even before you
saw it. The peculiar roar of its Pratt & Whitney engine gave it
away. Over 20,000 units of Harvard design were built to train pilots in
over 30 air forces, including the RCAF, both during and after World War
II.

The
aircraft resulted from requirements proposed in 1934 by the US
government for a new aircraft for basic training that would give
beginning pilots the feeling of a modern combat aircraft. Initial
improvements included a covered cockpit, a retractable landing gear and
flaps, the latter a first for a training plane.

The NA-16 (North
American Aircraft) took little time to get noticed. With war clouds
looming, the RAF ordered the aircraft in the hundreds and promptly
dubbed it the ‘Harvard’, a name that stuck with most Commonwealth
countries.

Soon after, the RCAF got into the act and in 1940
Noordyn of Montreal took on the Harvard’s production licence. Of the
2,557 Mark II aircraft built there, some were shipped to the RAF and
the USAAF. After the war, production was switched to Canadian Car and
Foundry at Fort William, Ontario where the Mark IV was built.

There
has frequently been confusion between the Harvard and the Yale. Both
had their origin in the same basic design but the Yale ended up with a
fixed undercarriage, a less powerful engine and a lighter weight. Part
of a Yale order for France arrived just before the fall of that country
in 1940 and ended up in the hands of the Luftwaffe; the rest (119) were
shipped to Canada for use in the British Commonwealth Air Training
Plan. They were used as advanced trainers until the arrival of the more
powerful Harvard; they were then relegated to the training of wireless
operators.

The Harvard was also offered as an inexpensive
fighter aircraft for sale to smaller countries not able to afford more
expensive planes, The NA-50, as it was called, was sold to Peru in 1938
where seven examples saw service in a brief war with Ecuador. The last
of these aircraft was withdrawn only some 20 years later.

After
almost 70 years in action the Harvard still lives on in Canada and
elsewhere. The most notable collection in this country belongs to the
Canadian Harvard Aircraft Association, whose aircraft are kept in mint
flying condition at Tillsonburg, Ontario. The Harvard’s roar will be
heard for a while still!