News Airlines
A look inside NAMK

South Korea marks a milestone, opens one of the world’s best aviation museums 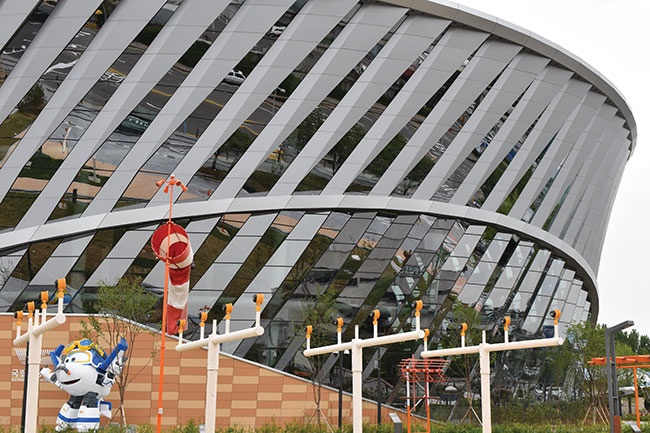 The Republic of Korea opened its national aviation museum in mid-2020. It showcases a range of historic and modern aircraft, including a T-6 Texan purchased from Canada. PHOTO: Andre Lavigne

This year marked the 100th anniversary of the first flight by Korean aviators. To celebrate, The Republic of Korea opened the National Aviation Museum of Korea (NAMK) on July 5. Koreans living in what Westerners call “South Korea” do not use these terms, they talk of their country as being “Korea”. This is part of the approach that there is only one Korea and that, hopefully, in the future the country will be reunited. The Government is the Republic of Korea (ROK), the entity entrusted with the creation of the museum is the equivalent of the Canadian Department of Transport; MOLIT.

What makes this museum standout is that the same approach was used as if it was the creation of a major art or history museum. There are no aircraft hangars anywhere in sight. This is an ultramodern museum using the latest audiovisual and virtual reality techniques, as well as innovative presentation of aircraft.

Korean society has had its exposure to aviation influenced mainly by military flying, even commercial aviation has until recently played a minimal part in everyday life. To generate more interest in aviation as opportunities for careers and involvement, the government created NAMK.

With three floors open to the public, the basement being reserved for archives and storage, NAMK has more than 200,000 square feet of space. The exhibits are not only for the aviation enthusiast but also for the uninitiated. On the first floor, we find an aviation history hall. Using original documents, as well as audio visual presentations, from early Chinese writings through Leonardo DaVinci and of course the Wright Brothers all the way to Concorde, we follow the growth of aviation.

Korean aviation history is highlighted in a separate hall, from its beginnings in 1920 (in the U.S.) through the Korean War and today’s vibrant civil and military aviation. The story begins relatively late as the country was under Japanese occupation and prohibited to have any involvement in aviation. The second floor offers visitors great opportunities to experience firsthand many facets of aviation. The Cabin Crew Experience lasts 90-minutes; it begins with a safety course in a typical airline classroom. Given by retired cabin crew instructors and using actual equipment such as fire extinguisher and life vests, the participants are getting ready to qualify for the next step, using a cabin simulator, in this case a 737 mockup.

After taking turns working in the galleys and operating the cabin doors the group moves to a different simulator to practice an emergency landing followed by an evacuation, including using an actual slide, the entire course is very realistic.

Using an interactive and novel approach, NAMK offers the opportunity to act as an ATC controller and pilot in a real-time, real-life simulation. Lasting more than 90 minutes, there is a presentation at first to outline the upcoming events. In turns, participants will be either a controller or pilot and will be working together via standard communication to operate a commercial flight.

The ATC centre replicates Incheon International airport (ICN/RKSI) serving Seoul. A complex visual system using multi-screens represents the actual terminal gates, as well as taxiways and runways. There are many ATC stations equipped with radio, radar and computer screens, again similar to the real deal. The controllers are in contact with the pilots in their group… the pilots are using and actual fixed base 747-8 simulator; as a long time 747-400 pilot I can assure you that this simulator was the real thing, providing a real aircraft experience. Pushback, taxi and takeoff all done in coordination with the ATC centre next door.

On the military side, there is on offer a simulated flight with the Black Arrows; the Republic of Korea Air Force (ROKAF) aerobatic team. Using virtual reality goggles and a set of full motion (in all axes) seats the participant is part of the team during a practice flight in the T 50B. Anyone can participate in the experiences; all you need to do is make an online reservation at a cost of 2000krw ($2.20 CDN), to prevent long waiting lines.

On the third floor there is a space for the younger visitors; where they can enjoy a check-in, security check and boarding using mini luggage and aircraft. The cabin and cockpit are all pint-sized including the meal trays. You can also find a nice reference library with comfortable sofas and chairs in a quiet atmosphere. Presently there are mostly Korean books and magazines on offer, but new English language materials are being ordered.

Andre Lavigne is a former Air Canada Captain who is now based in South Korea.