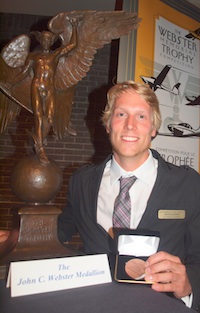 Aug. 23, 2011, Quebec City, Que. – For Kevin Aalders, capturing the 2011 Webster Memorial Trophy as Canada’s top amateur pilot is more than simply the culmination of a wonderful journey. It’s a testament to the fact that good things really do happen if you believe in your dreams and do whatever it takes to make them happen.

The 2011 Webster Trophy Ceremony was held Aug. 20 at the Delta Quebec Hotel in Quebec City and featured an impressive array of industry heavyweights in attendance, from current and retired pilots, Transport Canada officials to past winners. It was the fitting conclusion to a spirited week of competition and learning for the nine regional finalists selected from a pool of 105 applicants – the most in the competition’s history. The event was brilliantly hosted by Grondair in St. Frederic, Que., as all elements went without a hitch – thanks to the careful planning and execution of ceremony stewards Wayne and Amy Foy.

The John C. Webster Memorial Trophy Competition was established in 1932 by the late Dr. J. C. Webster of Shediac, New Brunswick, who wished to perpetuate the memory of his son, John. John Webster lost his life in an aircraft accident at St. Hubert, Que., while practising to represent Canada in an aerobatic flying competition, The Trans-Canada Air Pageant. In July, 1931, a month before his death, John had represented Canada in his Curtiss-Reid Rambler in the King’s Cup Air Race in England.

Today, The Webster Memorial Trophy Competition is an annual event committed to declaring the “Top Amateur Pilot in Canada.” It was interrupted once by World War II and again in 1954 due to escalating administrative costs.

The competition is sponsored by Air Canada – Flight Operations and is supported by a variety of impressive companies and organizations from the aviation sector. Amateur pilots aspiring to a career in aviation can be proud to affirm that they have competed in one of Canada’s most prestigious aviation events.

For more on this year’s Webster competition see, Matt Nicholls column in the Sept/Oct issue of Wings.