When Honda Aviation president and CEO Michimasa Fujino took to the stage at the National Business Aviation Association’s annual business aviation trade show in Las Vegas (NBAA2015) and announced the HondaJet program was close to receiving certification from the U.S. Federal Aviation Administration (FAA) – which it now has – it underscored the vaunted optimism some global OEMs, airlines and other aerospace players are having in an otherwise challenging aviation and aerospace market. 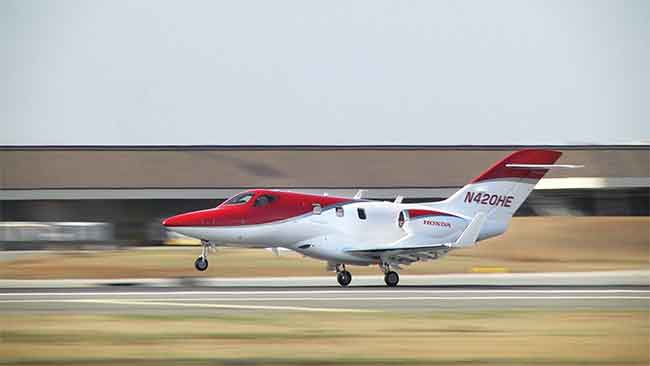 The revolutionary HondaJet program, which has been under scrutiny for years, is now firmly on track, as Honda ramps up production at its Greensboro, N.C. plant to three-to-four aircraft a month in early 2016. The FAA certificate was presented to Fujino Dec. 9, 2015 at a lively ceremony in front of 2,000 employees, suppliers, dealers and customers. The event took place at Piedmont Triad International Airport as coloured confetti, fired from cannons rained on the audience. If it had a “Super Bowl” feel to the proceedings – appropriate in the Carolina’s this year due to the success of the NFL’s Panthers – so be it. This was Honda Aircraft’s Super Bowl moment.

“Achieving FAA type certification for the HondaJet is a monumental milestone for Honda,” said Fujino, who Honda sent to the United States in 1986 to launch the aviation project. “We established Honda Aircraft as a new aerospace company and introduced our first product – an advanced light jet with technologies developed from serious research activities. We designed, tested and have now certified this clean-sheet design aircraft – an unprecedented challenge for Honda.”

The HondaJet’s innovative over-the-wing engine mount configuration, natural-laminar flow wing and composite fuselage make it a higher performance, more fuel-efficient and special light jet. Honda Aircraft claim the new jet is the fastest in its class at 675 kilometres an hour. The aircraft is powered by two GE Honda Aero HF120 turbofans installed on wing-mounted pylons and is equipped with a Garmin G3000 flight deck.

Fujino described the aircraft’s debut at AirVenture Oshkosh in 2005, as a turning point in the program. “At the time I did not know what the future held for our project. However, when we showed the test Hondajet to aviation enthusiasts at AirVenture, the response was overwhelming,” he said. “In a sense, this was a true beginning for Honda’s aviation adventure.”

Total flight-testing exceeded 3,000 hours and was conducted at more than 70 locations across the United States. The FAA’s Melvin Taylor, manager of the Atlanta Aircraft Certification Office, had nothing but praise for the certification process. “Collaboration is not easy, it often is a difficult subject. But when it is done successfully like this program, the rewards are gratifying to us all.”

Now, it’s time to get product out the door. Honda has 25 aircraft on the final assembly line. Deliveries, pilot training and after-sales customer service and support began in late 2015.

Dealing with the challenges
HondaJet’s success is a shining example of how one OEM is making positive progress in a global aerospace and aviation climate rife with uncertainty. As many of the market’s best barometers will concur, a murky global economic outlook, diminishing oil prices, currency issues and ongoing political unknowns are taking their toll in many segments.

In its annual Business Aviation outlook released late in 2015, for example, Honeywell Aerospace has throttled back on its prediction for business jet deliveries as a “slow growth” economic environment continues its grip on global markets. The 24th annual Global Business Aviation Outlook, released at NBAA 2015, forecasts up to 9,200 new business jet deliveries worth US$270 billion from 2015 to 2025. This represents a three- to five-per cent-reduction over the value noted in the 2014 forecast. As a point of comparison, in its annual market forecast released at the European Business Aviation Convention and Exhibition (EBACE) in Geneva in the fall of 2015, Bombardier Business Aircraft predicted 9,000 deliveries from 2015 to 2024, valued at US$267 billion.

Still, on the back-end of the projection, Honeywell sees a three per cent average annual growth despite the relatively flat near-term outlook as new models and improved economic performance fuel industry growth. “While emerging markets like Brazil continue to be a bright spot for business aviation over the medium term, we have seen weaker demand across other key growth markets, which may affect near-term order and delivery levels,” said Brian Sill, president, business and general aviation for Honeywell Aerospace. “While the sluggish economic growth and political tensions are driving a more reserved approach to purchasing, we are seeing operators invest in retrofits and upgrades for their existing aircraft, especially around connectivity, boosting aftermarket opportunities.”

Some of the salient highlights of the Honeywell outlook include:

North American buyers will lead the way in terms of growth prospects with 60 per cent of projected demand occurring in the U.S. and Canada. European growth, which shows a sharp decline in demand this year, will remain sluggish due to political uncertainty while the BRIC countries – Brazil, Russia, India and China – was down 29 per cent in 2015. Brazil remains a bright spot, with 47 per cent of new jet purchases scheduled over the next two years.

Commercially speaking: Airbus and Boeing battle
While the global business aviation market continues its slow trajectory, the two titans of the commercial jet-manufacturing world are still battling for world commercial aviation supremacy. Both Airbus and Boeing had solid showings in 2015 with Airbus edging Boeing in overall aircraft sales of 1,036 net orders (delivered 635) to 768 orders (delivered 762). The majority of Boeing’s success came in the wide-body arena, including the 787 Dreamliner, while Airbus was more successful in the single-aisle A320 range of jets.

In speaking with the media in Paris in January about his company’s performance, Airbus CEO Fabrice Bregier was optimistic about future commercial market trends, noting that the company is actively trying to tap the Chinese market. Airbus is planning to open a new facility in Tianjin next month. When commenting on economic realities, Bregier told The Associated Press, “we should not mix up problems we can see on the financial markets and the real economy.”

Backing Breiger’s sentiment is Airbus’ commitment to ramp up production in 2016, specifically with its new A350 XWB. The company is also concentrating on increased automation and advanced technologies at its plants, such as 3D printing of some components – any process to give it a competitive advantage.

While Airbus sets its sights to the East, Chicago-based Boeing is keeping up the pace. Boeing announced last year it, too, was tapping the Chinese market with plans to develop its own assembly plant there. The China market is indeed a hot one, and it is not lost on Chinese firm Commercial Aircraft Corp., which unveiled the C919 in 2015 – the first Chinese-made commercial airliner.

Commercial aviation OEMS including Airbus, Boeing, Bombardier, Embraer and more are all competing to meet an estimated demand for some 38,050 new airplanes valued at some $5.6 trillion over the next two decades. Leading the demand will be the single-aisle (90 to 230 seats, worth roughly US$2.7 billion) and small/medium aircraft (between 200 and 400 seats, worth roughly US$2.4 billion), according to the report.

“The commercial airplane market continues to be strong and resilient,” said Randy Tinseth, vice-president of marketing, Boeing Commercial Airplanes. “As we look forward, we expect the market to continue to grow and the demand for new aircraft to be robust.”