The 2017 Aerospace, Defence and Security Expo (ADSE) at TRADEX in Abbotsford, B.C. hit a new high in 2017 with record attendance, a line-up of high-profile industry, military and government speakers, a sold-out trade show, and an announcement regarding federal funding for ADSE and support for Western Canadian presence at aerospace events in 2017 and 2018. 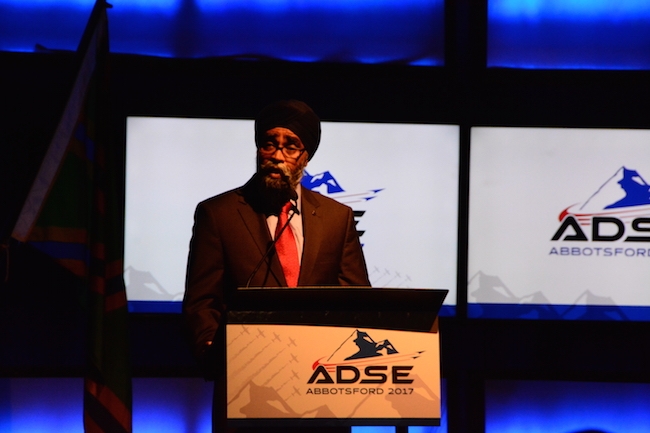 A funding announcement was also made by the Honourable Harjit Sajjan, Minister of National Defence on behalf of the Honourable Navdeep Bains, Minister of Innovation, Science and Economic Development and Minister responsible for Western Economic Diversification Canada (WD). Funding totalling more than $320,000 is being made available through WD to support ADSE in 2017 and 2018, the CARIC National Research Forum in 2017, and a Western Canadian presence at the Paris Airshow in 2017 and the Farnborough International Airshow in 2018.

“I have seen firsthand the innovative edge Canadian companies are bringing to our Canadian Armed Forces capabilities. Our government is proud to support the sector’s highly skilled workforce to continue to produce quality services and products,” said Minister Sajjan in ADSE’s closing keynote address.

This is the seventh year for ADSE but the first time it’s been held side-by-side with the Canadian Business Aviation Association’s (CBAA) annual convention and exhibition. In addition to Minister Sajjan, keynote speakers at the two-day Expo included: the Honourable Bruce Ralston, BC’s Minister of Jobs, Trade and Technology; Lieutenant-General Michael Hood, Commander of the Royal Canadian Air Force; and Brigadier-General Michel Lalumiere, Director-General of Air Force Development. In addition, ADSE delegates heard from a host of senior industry and military representatives, technology innovators, analysts, educators and local elected officials. The record 400 ADSE delegates included senior industry, government and military representatives from across Canada and around the world – including dignitaries such as the Commander of the Royal Netherland Air Force. The combined delegates of both shows totalled just over 1,000.

“The opportunity for ADSE delegates to also browse the CBAA exhibits and displays, and network with their delegates, added a valuable new dimension to the conference in 2017,” said AIAC President and CEO, Jim Quick. “The partnership this year between AIAC and CBAA has proven to be positive and productive, and helped to continue to raise the stature of ADSE as one of the premier aerospace and defence events in Canada.”

AIAC and AIAC Pacific wish to extend special thanks to ADSE’s nearly 50 sponsors in 2017 – especially Presenting Partners Western Economic Development Canada, the Province of British Columbia, and the City of Abbotsford – for their generous and ongoing support, without which ADSE would not be possible.

In 2018 ADSE will be held over two days, August 9-10, 2018, just ahead of the 2018 Abbotsford International Airshow. ADSE will again join forces and co-locate with CBAA in Abbotsford again in August 2019.