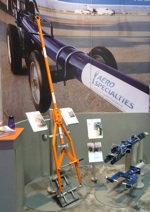 Jan. 28, 2009 – On the heels of CE approval for its entire towbar system in 2007,
AERO Specialties recently completed a year-long towbar and head redesign project.

AERO Specialties Redesigns Towbars, Introduces New Models & Features
Boise, Idaho, January 27, 2009.  On the heels of CE approval for its entire towbar system in 2007, AERO Specialties recently completed a year-long towbar and head redesign project.  The project introduced many new and improved features to its already well-received line of business & regional aircraft heads and towbars, and was accomplished without significant price increases, or by sacrificing the interchangeability of its entire system with other manufacturers’ (e.g. Tronair, Brackett, etc.).

Towbars
AERO designed and introduced two entirely new towbars to its line, and improved the security and ergonomics of all its towbar products.

The new “Scorpion” Multi-Use towbar fits most aircraft up to 15,600 lbs. (7,082kg) and is the only “universal” towbar featuring shear protection and dedicated aircraft attachment pins backed up with a secondary, “release-proof” latch.  “We acquired an old favorite universal towbar design and made it even better,” said Matt Sheehan, President of AERO Specialties.  “The Scorpion attachment pins are the same pins we use in our larger multi-heads, which provide the same precise fit but offer a more flexible towing solution to certain types of operators,” said Sheehan.  The Scorpion is also the only universal type towbar that incorporates shear protection, offering an additional level of safety to moving aircraft.  The unique secondary latching mechanism all but guarantees the Scorpion will not detach from aircraft during towing, something that other popular universal towbars do not offer.

AERO’s new TB125 aluminum towbar joins the well-established steel TB3 in its 125,000-pound capacity multi-head towbar selection, but drastically reduces the weight in this class of towbar system: TB125 weighs 90 lbs. (41kg), while the TB3 (intended primarily for regional airline service) weighs 155 lbs.
(70kg).  The TB125 was the guinea pig for AERO’s new elastomer-based shock-absorbing hitch design, which has been incorporated in the TB3, TB2.5, and TB1 as well.  Unlike other manufacturers’ hitches, AERO’s elastomer-based (as opposed to steel spring type) hitches combine unprecedented and maintenance-free, progressive shock absorption with linear shear protection.  The elastomer inserts will not permanently compress, eliminating the maintenance required in spring-type hitches, which compress over time and require dis-assembly and shim insertion.  The linear shear protection in AERO’s TB125 (and the TB2.5 and TB3 as well) is also unique among its competitors.  No other business or regional aircraft multi-head towbars offer linear shear protection as a standard feature.  AERO’s drop-through shear pins add another layer of protection against aircraft nose gear damage, and if a shear pin breaks it can be replaced without tools immediately (spare shear pins are secured in the handle mechanism near the hitch).  Combined with the linear/radial shear protection in most of its attachment heads, the new elastomer hitch design makes AERO’s towbar system the safest and most durable, user-friendly system in the industry.


Heads
In addition to adding several new head attachments to its selection, AERO redesigned the shear protection and improved the fit of all its heads.  Using state-of-the-art engineering and CAD software, as well as tried-and-true field testing, AERO combined its previous radial (side-to-side) shear protection with linear (push-pull) shear protection in all applicable heads.  This shear protection is designed to break a
single shearbolt in the head if excessive linear or radial force is applied during towing.  “Excessive force” has been carefully calculated and tested to occur well before the towing operation can cause any damage to the expensive aircraft nose gear.

AERO also improved the fit of its heads on all applicable aircraft.  By systematically testing each and every head on specific aircraft, and measuring the play in the attachment points, AERO’s engineers modified the design and CNC production of many attachment pins and mechanisms for a more precise, safer aircraft fit.

Additional Improvements
Other improvements across the entire line of towbars and heads include: 1) engraving the CE mark and part number directly into the product; 2) bolstering potential stress-points on heads for heavier aircraft; 3) adding additional safety decals and placards to all items; 4) revising and bolstering operation manuals
(available on-line), which include detailed parts lists and diagrams for all towbars and heads for greatly simplified replacement parts ordering; and 5) refining the manufacturing process for greater inventory control and constant IN-STOCK status on all items.

“When you look at what we’ve done in the last year, you could say we’ve really raised the bar in the towbar industry,” said Sheehan.

About AERO Specialties:
A preferred GSE provider for numerous regional airlines and major FBO
chains, AERO Specialties provides new and used aircraft ground support equipment to general and commercial aviation customers worldwide.   We manufacture lavatory, potable water, cleaning, and oxygen/nitrogen servicing carts, as well as aircraft towbars.  We are authorized distributors of other major GSE manufacturers, such as Eagle Tugs, TLD, Tug Technologies, Unitron, WASP, Clyde, Stinar, and
others.  And we refurbish all types of GSE.  Our secure online store provides customers with GSE and parts 24/7.