WestJet Airlines shows no signs of being blown off course by fickle travellers. 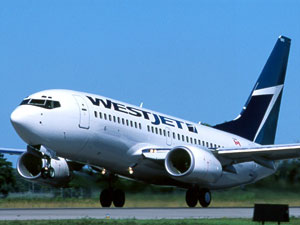 WestJet Airlines shows no signs of being blown off course by fickle
travellers, but its expansion in eastern Canada may be slower than
originally anticipated, says president/CEO Clive Beddoe. The
Calgary-based carrier had expected to fly to Halifax, St. John's and
Montreal by year-end but Beddoe says it may not be able to add the new
routes that quickly even though WestJet is soon to add 11 more Boeing
737-700 aircraft to its fleet in 2003.

"It's going to be very dependent upon the degree of success we
experience in Toronto and the number of additional aircraft we are
under pressure to put into Toronto as opposed to going elsewhere,"
Beddoe told analysts after releasing first quarter results which saw
profit increase 22.4% from a year earlier. Net income rose to $7.1
million from $5.8 million while revenue rose to $137 million from $92.3
million. WestJet began flying to Toronto-Pearson from Calgary and
Edmonton on May 23.

But the airline said it is eliminating flights on some short-haul
routes, claiming the government's new security fee is deterring some
passengers. In fact, Pierre Jeanniot, former Air Canada head and
outgoing director of IATA, has blasted Canada's $12 one-way airport
security fee, calling it the highest security charge in the world.
"Canada will be the only country in the world that seeks to recover all
of the anticipated costs of its aviation-security initiatives," he
said. But federal Transport Minister David Collenette defended the
surcharge, saying the government might reduce it later after a review.