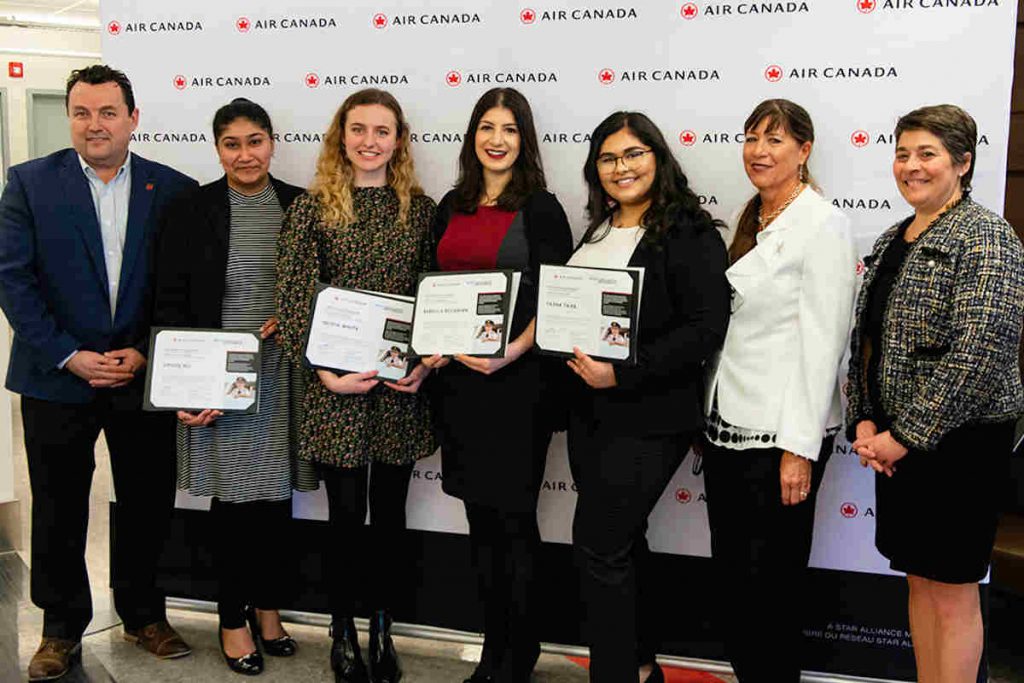 The winners of the inaugural Captain Judy Cameron Scholarship, awarded in partnership with the Northern Lights Aero Foundation, each receive $5,000 toward their studies in aviation. (Photo: CNW Group/Air Canada)

Air Canada notes Flight AC167 from Toronto to Edmonton on March 5 also was also the first transcontinental flight to be guided by all-female NAV Canada Air Traffic Controllers from departure in Toronto to landing in Edmonton.

The winners of the inaugural Captain Judy Cameron Scholarship, awarded in partnership with the Northern Lights Aero Foundation, each receive $5,000 toward their studies in aviation. All four are also pursuing their commercial pilot’s licence. They include:

Urooj Ali, who is studying Geography and Aviation at the University of Waterloo. She joined the Royal Canadian Air Cadet program at age 12, successfully completed the Glider Pilot Scholarship in Quebec at the age of 16 and became the highest-ranking and sole female cadet with a pilot’s licence.

Rebecca Beylerian, who is pursuing a Bachelor of Commerce at the University of Calgary. She is a Jazz flight attendant, volunteers with the Civil Aviation Search and Rescue Association (CASARA), Air Cadet Program, Elevate Aviation, Ninety Nines and Women in Aviation, and president of the Alberta Rocky Mountain High Women In Aviation (WAI) Chapter, Calgary.

Olivia White, who is completing a Bachelor’s degree in Aeronautics Leadership at the University of Windsor. She volunteers with Air Canada Rouge for the Girls Take Flight event in Oshawa.