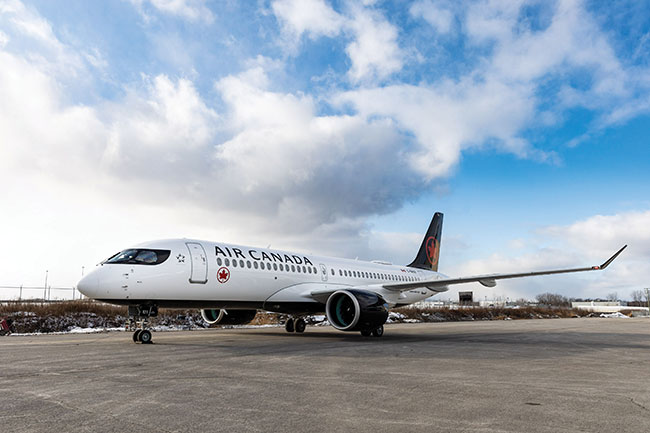 Air Canada has refunded more than $1.2 billion to eligible customers with refundable fares whose travel was impacted by COVID-19. (Photo: Airbus, Air Canada)

Air Canada is vowing to fight a U.S. Department of Transportation move to seek a US$25.5-million penalty for “failing to provide consumers prompt refunds” after cancelling their flights amid the COVID-19 pandemic.

In a “notice of enforcement proceeding” issued by the department Tuesday, its aviation consumer protection agency said Air Canada “unlawfully failed to provide timely refunds” for flights between the United States and Canada that were cancelled or significantly changed.

The agency said it received more than 6,000 refund complaints since March 1, 2020, and has notified Air Canada multiple times over the past year of its view that the airline’s stance “lacks merit.”

It said Air Canada has argued it is not required to provide reimbursement, citing the unique circumstances of the pandemic.

Air Canada said it believes the department’s position has no merit.

“Air Canada remains firm on its position and will vigorously challenge the proceedings,” spokesman Peter Fitzpatrick wrote in an email.

He said the airline has refunded more than $1.2 billion to eligible customers with refundable fares whose travel was impacted by COVID-19.

Air Canada refused to refund non-refundable tickets until it received a financial package in April from the Canadian government worth up to $5.9 billion, including up to about $1.4 billion in an unsecured credit facility to refund these tickets.

“This unlawful no-refund policy imposed significant harm to consumers and benefited Air Canada at the expense of other airlines that did comply with U.S. law,” the agency said in a report.

Multiple airlines refused for months to reimburse customers who paid for services that were never rendered after the airline industry ground to a halt due to travel advisories and border closures.

In addition to a prohibition on unfair practices, a department regulation requires airlines to provide refunds within seven days for purchases made by credit card and 20 days for cash and cheque purchases.

Given the significant volume of refund requests resulting from the pandemic, the department said it would use its enforcement discretion and not take action against airlines for missing those deadlines if they were making “good faith efforts” to provide refunds in a timely manner.

“Air Canada did not make such good faith efforts. Instead, for almost one year after the announcement of the May 2020 enforcement notice, Air Canada continued its no-refund policy in violation of U.S. law.”

Air Canada says the department’s refund rules are guidelines rather than regulations.

“The law in every jurisdiction, including Canada, requires airlines to refund flights the airlines themselves cancelled. Americans should cherish having a regulator that stands up for consumers.”

Air Canada told the department that it received more than 15,000 refund complaints or comments and 5,100 refund requests involving flights between the two countries that were cancelled by the airline due to the pandemic between March 13 and Nov. 13, 2020.

Air Canada is required to respond to the complaint within 15 days. The matter will then be decided by a Department of Transportation administrative law judge.

The U.S. agency also said it rejects airline arguments that they don’t have to refund fares for cancelled flights if passengers are offered other transportation options.

“We find it to be manifestly unfair for a carrier to fail to provide the transportation contracted for and then to refuse to provide a refund if the passenger finds the offered rerouting unacceptable (e.g., greatly delayed or otherwise inconvenient) and he or she no longer wishes to travel.”

— With files from Christopher Reynolds in Ottawa.


Related
US seeks to fine Air Canada $25.5 million over slow refunds
Advocate accuses Air Canada of a lack of transparency on passenger refunds
Air Canada to issue refunds to customers who did not fly after flights cancelled
Airline watchdog ordered to develop new rules for flight cancellation refunds