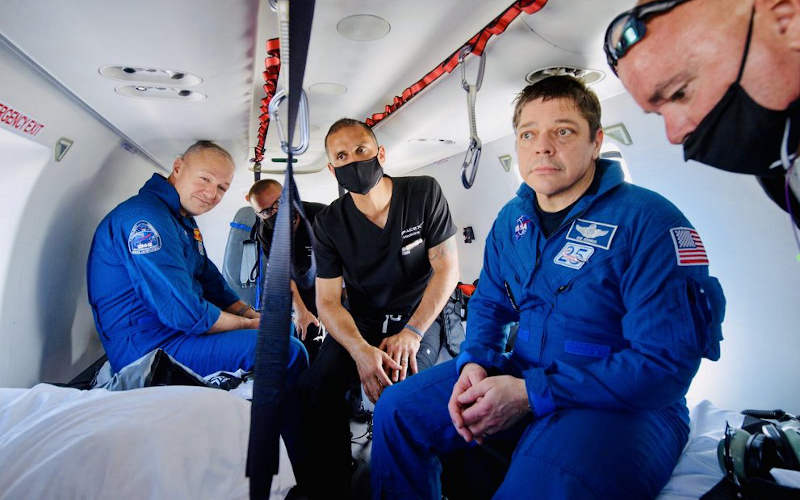 NASA astronauts Bob Behnken and Doug Hurley were transported to land aboard an Airbus H225 helicopter after their 18-hour flight from the International Space Station inside a SpaceX Crew Dragon Capsule, which landed in the Gulf of Mexico. (Photo: NASA, Airbus)

An Airbus H225 helicopter operated by Texas-based Air Center Helicopters Inc. was used to retrieve NASA astronauts Bob Behnken and Doug Hurley immediately after their historic splashdown in the Gulf of Mexico on August 2. Back on May 30 from the Kennedy Space Center in Florida, Behnken and Hurley became the first NASA astronauts to launch from American soil in nine years, following the cancelation of the Space Shuttle Program (Atlantis last launched in July 2011).

Named SpaceX Demo-2, the May 30 test flight to the International Space Station also marked the first time in history that humans were launched into space on a commercially built and operated spacecraft, including SpaceX’ Crew Dragon capsule and its reusable Falcon 9 rocket. In canceling the Space Shuttle Program, NASA initiated a New Era in the commercialization of Low Earth Orbit (LEO) missions, captivating entrepreneurs like SpaceX founder Elon Musk.

The SpaceX Demo-2 mission was classified a test flight to validate the SpaceX crew transportation system, including launch, in-orbit, docking, and landing operations. It was SpaceX’s second spaceflight test of its Crew Dragon, and its first test with astronauts aboard. The successful mission will pave the way for its certification for regular crew flights to ISS as part of NASA’s Commercial Crew Program, which is also preparing for human exploration of the Moon and Mars. As the Commercial Crew Program progresses it will target returning crewed capsules to land, but the August 2 Crew Dragon splashdown added safety parameters to the test mission.

“Air Center Helicopters is proud to be joined with the SpaceX and NASA teams assisting in the recovery of astronauts in the first water landing since 1975,” said Rod Tinney, CEO of Air Center. “We look forward to flying our H225s to support SpaceX with all their rotary-wing needs and to playing a critical role in returning human spaceflight to the United States. This success comes from a culmination of great teamwork between three partners and ended in a flawless recovery.”

It took Behnken and Hurley 18 hours after leaving the International Space Station to reach the Gulf of Mexico in the Crew Dragon. Airbus explains two of Air Center’s H225 helicopters were prepped and ready to assist in the crew and cargo transport from the main recovery ship back to Pensacola, Florida. NASA in January 2020, through Davenport Aviation, ordered three Airbus H135 helicopters for the Kennedy Space Center. Two of the helicopters are scheduled for delivery later this year, with a third planned for early 2021, to perform a range of missions like security during rocket launches, emergency medical services and qualified personnel transport.

Air Center provided its own unique mission experience to NASA’ historic SpaceX flight. The helicopter company has operated a range of critical mission with the H225 and Super Puma aircraft, including PR/CASEVAC missions overseas, shipboard vertical replenishment (VERTREP) missions with the U.S. Navy, as well as firefighting with an upcoming revamped configuration.

Air Center is the largest civil operator of H225 aircraft, notes Airbus, with a total of 20 H225s in its fleet, along with two AS332 Super Pumas and four H125s. The H225 is the latest version in Airbus’ Super Puma family, which has accumulated more than 5.8 million flight hours for the more than 1,000 aircraft delivered worldwide.