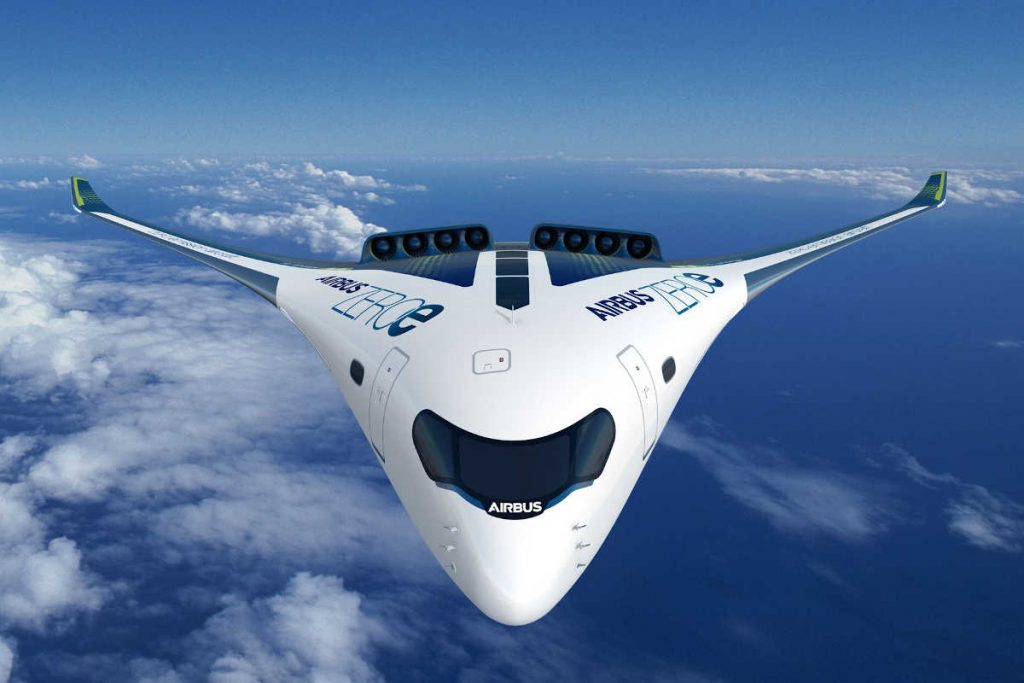 Airbus today revealed three concept aircraft, code named collectively as a program called ZEROe, to develop the world’s first zero-emission commercial aircraft. The company plans to launch the ZEROe aircraft program by 2025 with the goal of entering the first airplane into service by 2035.

Each of the three concept aircraft represent a different approach to achieving zero-emission flight, in terms of technology pathways and aerodynamic configurations, but they all rely on hydrogen as a primary power source via combustion or fuel cells.

Hydrogen holds what Airbus describes as exceptional promise as a clean aviation fuel, as used in synthetic fuels (combustion) or as a primary power source (fuel cells), noting it is likely to be a solution for aerospace and many industries to meet future climate-neutral targets.

“We intend to play a leading role in the most-important transition this industry has ever seen,” said Guillaume Faury, CEO, Airbus. “The concepts we unveil today offer the world a glimpse of our ambition to drive a bold vision for the future of zero-emission flight. I strongly believe that the use of hydrogen – both in synthetic fuels and as a primary power source for commercial aircraft – has the potential to significantly reduce aviation’s climate impact.”

The three ZEROe concepts include a turbofan, turboprop and blended-wing designs. Airbus envisions the turbofan design as carrying 120 to 200 passengers and holding a range of more than 2,000 nautical miles, allowing for transcontinental operation. The turbofan concept, explains Airbus, would be powered by a modified gas-turbine engine running on hydrogen, rather than jet fuel, through combustion. The liquid hydrogen for the tubofan concept would be stored and distributed via tanks located behind the rear pressure bulkhead. Any hydrogen combustion design would also employ hydrogen fuel cells to create electrical power that complements the gas turbine.

A turboprop design could carry up to 100 passengers, using a turboprop engine with an arrangement of six-bladed propellers and also powered by hydrogen combustion in modified gas-turbine engines. Airbus envisions this ZEROe concept as being capable of traveling more than 1,000 nautical miles.

Airbus envisions a blended-wing body design, in which the wings merge with the main body of the aircraft, as carrying up to 200 passengers. This ZEROe concept could hold a range similar to that of the turbofan concept, more than 2,000 nautical miles. Airbus notes an exceptionally wide fuselage opens up multiple options for hydrogen storage and distribution, and for cabin layout.

“These concepts will help us explore and mature the design and layout of the world’s first climate-neutral, zero-emission commercial aircraft, which we aim to put into service by 2035,” said Faury. “The transition to hydrogen, as the primary power source for these concept planes, will require decisive action from the entire aviation ecosystem.”

Airbus notes efforts to realize these aircraft concepts, and for the aviation industry as a whole, will require airports to develop significant hydrogen transport and refueling infrastructure to meet the needs of day-to-day operations. Support from governments will also be key to meet these objectives, explains Airbus, with increased funding for research and technology, digitalization, and mechanisms that encourage the use of sustainable fuels and the renewal of aircraft fleets.

“As recently as five years ago, hydrogen propulsion wasn’t even on our radar as a viable emission-reduction technology pathway,” said Glenn Llewellyn, VP, zero-emission aircraft, Airbus. “But convincing data from other transport industries quickly changed all that. Today, we’re excited by the incredible potential hydrogen offers aviation in terms of disruptive emissions reduction.”

Airbus estimates hydrogen has the potential to reduce aviation’s CO2 emissions by up to 50 per cent.