Oct. 16, 2008, Paris, France - Airbus said today that it is putting a planned production increase on hold until further notice because of the global financial crisis. 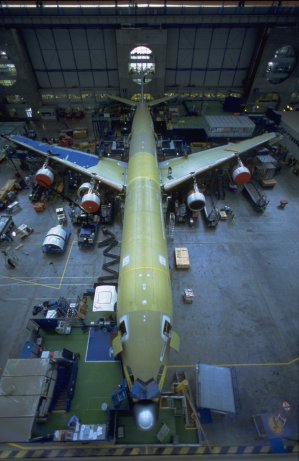 Oct. 16, 2008, Paris, France – Airbus said today that it is putting a planned production increase on hold until further notice because of the global financial crisis.

The European jet maker will maintain production of its A320 narrow-body jets at 36 a month, and not lift it to 40 a month by 2010 as earlier announced, Airbus spokeswoman Anne Galabert said.

Airbus will also scale back a planned production increase in its A330 jets to 10 a month by 2010 rather than the 11 it had announced previously.

The changes come in response to the global financial crisis, which is raising uncertainties for the air transport market, Galabert said.

Airbus may review the decisions on production next year, depending on market conditions, Galabert added.

Last month Airbus presented new cost-cutting measures to unions as part of parent company EADS' plan to seek an additional one billion euros (US$1.42 billion) in savings starting in 2010.

In a bid to compensate for the euro's rise against the dollar and improve competitiveness, EADS chief executive Louis Gallois wants to expand production in the dollar zone or in areas where labour is cheap. He has promised the plans will not involve any additional job losses in Europe.

The International Air Transport Association last month predicted airlines will lose $5.2 billion this year, compared with a June prediction of $2.3 billion to $6.1 billion in losses, indicating a great deal of uncertainty over oil prices.