Despite gloomy forecasts for many sectors of the US economy, agricultural aircraft manufacturer Air Tractor, Inc. is experiencing one of its best years ever. 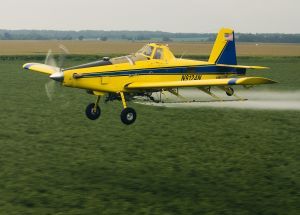 June 16, 2008, Olney, TX – Despite gloomy forecasts for many sectors of the US economy, agricultural aircraft manufacturer Air Tractor, Inc. is experiencing one of its best years ever, according to Leland Snow, founder and President of the company, which is the leading manufacturer of ag planes in the world.

During the first five months of 2008 Air Tractor licensed and delivered 50 airplanes, including some that were produced in late 2007.   The bright yellow aircraft cost an average of $700,000.  According to Kristin Edwards, Vice President of Sales, the company expects to conclude sales of 59 aircraft by July 1, 2008.  Annual aircraft production is forecast to total 94 aircraft, with anticipated production of 120 aircraft for 2009, says Edwards.

“Strong sales of Air Tractor aircraft are the result of increased demand around the world for aerial application aircraft,” explains Air Tractor president Leland Snow.  “A combination of economic factors are producing a favorable climate for aircraft sales.  High commodity prices and the worldwide boom in agriculture, plus a weak U.S. dollar have made aircraft more affordable for overseas customers.”  Air Tractor is also experiencing strong demand for its aerial firefighting tanker plane, the AT-802F, Snow reports.   Eastern European countries that have experienced devastating wildfires for the past several years are purchasing the single engine air tanker in increasing numbers because of its low operational costs and versatile mission profile capabilities.

“These are busy times at Air Tractor,” says Snow.  “With the world’s demand for food only increasing, we don’t see that things here will slow down anytime soon.”