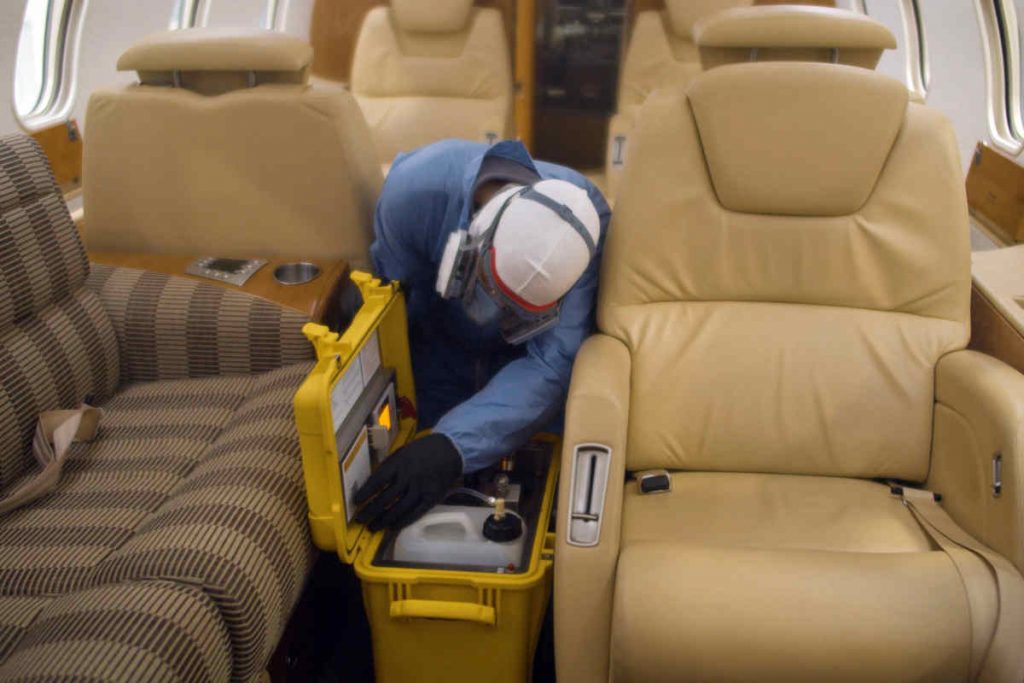 Aircraft maintenance personnel can place the portable AeroClave RDS 3110 system inside the cabin of an aircraft, plug it in to an electrical connection, set a timer, and start the disinfecting process by either pressing a button on the console or through a remote-control unit. (Photo: AeroClave)

COVID-19 has been in the public’s attention since January. During March and April, the virus had grown exponentially in North America, impacting every corner of aviation. Our government leaders focused on flattening the curve in an effort to contain the virus. Although the mortality rate varies country to country, the rapid infection rates have turned this pandemic event into our new reality. From a Business Aviation perspective, there are a number of proactive and reactive steps we can take to help keep us safe.

Our personal flight bags contain many items which can act as hosts transferring the virus between the pilot, air crew, friends and family. Headsets, oxygen masks, nasal cannulas, kneeboards, iPad mounts, iPads, ADS-B IN receivers, the list goes on and on. Headsets are a perfect place for the virus to live on. Our hands, eyes and mouth become the distribution mechanism for the virus. The headset’s windscreen, which is typically made of a light foam and close to our mouth, is the first stop for the virus. Consider replacing the windscreen more frequently (costs range from $4.50 to $10.50). Rinsing it in a solution of isopropyl alcohol (70 per cent or more) should help kill the live virus.

On March 20, Garmin released Service Advisory 2051a recommending using a cleaner with 70 per cent with no more than 91 per cent isopropyl alcohol. The company advises that cleaners containing ammonia will damage Garmin display screens. Soap and water can be used to clean the buttons and knobs, however, care should be taken as the avionics are not waterproof.

At the FBO, special attention should be paid to social distancing (two meters or more). Credit/Debit card machines allow for the virus to be easily transmitted between people. Not only should it be wiped down before you touch it, but the area where your card is slide into is rarely disinfected. Wipe down your card before putting it back into your wallet. Many credit cards have increased their tap limits from $25 or $100 to $250. Mobile wallets like Apple Pay and PayPal are alternatives to credit card tap.

In a two crew aircraft, it is wise to understand the social interaction of the crew. As they say, there are Old Pilots and Bold Pilots, but no Old Bold Pilots. COVID-19 is that thunderstorm that we’re trained to avoid, which we can’t visually see. Knowing your co-pilot and aircrew’s social distancing and self-isolation habits is essential to understanding your personal risk of the flight. From a pilot’s perspective, here are some pre-flight and post-flight tips:

Pathogen remediation for aircraft
There are also some interesting technologies to deal with the aircraft’s interior disinfection. AeroClave LLC was founded in 2003 for the purpose of developing, manufacturing and selling a system capable of decontaminating commercial and military aircraft from pandemic-producing viruses and other disease-causing pathogens. The AeroClave System has evolved into multiple decontamination products that are easy to operate and will limit the spread of infectious disease. In addition to the ability to decontaminate aircraft, AeroClave has developed a suite of systems capable of decontaminating first responder vehicles like ambulances, fire engines, and police cruisers; and facilities such as fire stations, hospitals, schools, and more.

In 2010, AeroClave released the RDS 3110, a portable self-contained disinfecting device. Essentially, aircraft maintenance personnel can place the RDS 3110 inside the cabin of the aircraft, plug it in to an electrical connection, set a timer, and start the process by either pressing a button on the console or through a remote-control unit. Aircraft preparation for the disinfecting treatment involves opening any draws, lavatories, consoles and cabinetry. The RDS 3110 will fog the cabin, depositing a calibrated amount of disinfectant onto the aircraft’s interior. After 10 minutes of resting, the disinfectant will eliminate a variety of pathogens. The RDS 3110 also has a hand wand to allow maintenance technicians to direct disinfectant onto a specific area in the aircraft. Duncan Aviation has been using the unit across its fleet and its customer’s aircraft. The system may also be used throughout the facility in areas used by employees and customers.

The RDS 3110 requires a 110 volt connection, has a one gallon container, weights 48 lbs, and is housed in a sturdy Pelican like case. The system ships with 12 gallons of disinfectant. One gallon can deliver 22 cycles of 500 cubic feet (CF). The system can deliver a fogging cycle to a maximum of 5,000 CF. As an example, a Cessna Citation X’s cabin is 790 CF with a luggage compartment 82 CF. One gallon of disinfectant will deliver roughly 13 disinfecting cycles. The RDS 3110 costs US$15,500 (excluding taxes and shipping costs), including 12 gallons of disinfectant.

Now, lets talk about the disinfectant. AeroClave has standardized on a Chloride Oxide solution (Vital Oxide) from Vital Solutions. The solution contains: Oxychlorine compounds at 0.2%; n-Alkyl Dimethyl Benzyl Ammonium Chloride at 0.125%; n-Alkyl Dimethyl Ethylbenzyl Ammonium Chloride at 0.125%; and inert ingredients at 99.55%. Vital Oxide has been tested and approved by the EPA to be effective on a number of pathogens and is an EPA-registered hospital disinfectant cleaner, mold and mildew killer, and odour eliminator. Vital Oxide is non-irritating to skin, non-corrosive to most treated articles, NSF-certified (no rinse required) for food-contact surfaces, and listed as a category IV (lowest approved category) pesticide with the EPA. Recently, Vital Oxide was approved by the EPA to be effective against the SARS-COVID-2 pathogen which causes the COVID-19 virus. Vital Oxide is manufactured, distributed and sold by Vital Systems located in West Palm Beach, FL. One gallon of Vital Oxide retails at US$37.95.

Aviation Clean Air (ACA), a partnership between Southern Aviation Parts & Services, TRIAX Partners and American Ion Inc., has developed a unique technology to provide disinfection while the aircraft is airborne. The first installation of the ACA Component (their product name for the device) was in 2014 on a Falcon 2000, followed by a Boeing Business Jet (BBJ). ACA received a STC for the BBJ in 2015, as well as for the Gulfstream G550. In February 2019, a blanket STC was received for installation in Gulfstream G450, GV, G550, G650 and G650ER aircraft. ACA has Parts Manufacturer Approval for the system and is an approved supplier to several OEM aircraft manufacturers. 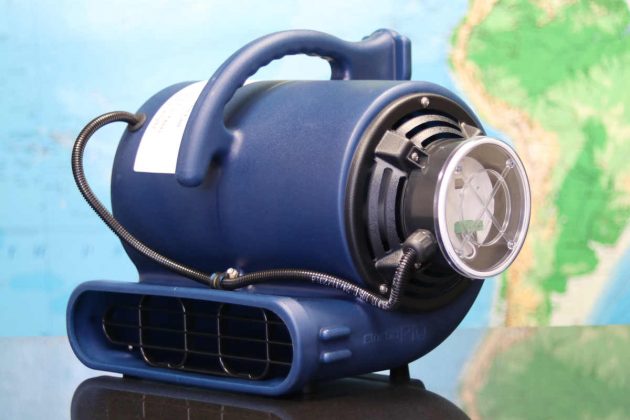 ACA’s ion distribution system kills pathogens and purifies the air and aircraft surfaces by pushing air through the cabin and distributing ions throughout the aircraft interior. The electronically created positive and negative ions are created from hydrogen and oxygen molecules in the water vapor present in the air, working as a cleaning agent to purify the air and surfaces. Co-founder Mallie Seckinger explains, “These positive and negative ions have the property of clustering around micro particles, gases, airborne mold spores, viruses and bacteria. A natural reaction takes place on the surface of the airborne and surface pathogens where they deprive the harmful biological of its hydrogen atoms. As a result, the pathogens are inactivated and are not able to reproduce, multiply or mutate, will quickly die and are no longer a threat to humans.”

With the system installed in the aircraft’s environmental system, the ionization process is activated once the environmental is turned on. With ions flowing throughout the cabin and cockpit, existing pathogens are removed. However, the system is not able to disinfect airborne droplets between humans. To properly decontaminate the aircraft, a minimum of 6,000 ion/cm3, as an average, is required. ACA’s customers typically see an average of 20,000 to 100,000 ions/cm3 in the cabin and cockpit. To determine ionization levels, ACA retails a handheld ion counter meter (PN AIC2MJ), manufactured by Alpha Labs (US$528). The ACA system is roughly between US$90,000 and US$100,000 (installed) on an aircraft with two air packs.

ACA and International Aero Engineering developed a portable ground unit using a 110 VAC electric-powered ionization and air blower unit that is placed on the floor of a cabin and activated for one to two hours. The unit is then powered off and removed from the aircraft. Ground crew, technicians and other personnel can then enter the aircraft and perform their normal duties. In addition to disinfecting and purifying the aircraft, the ionization unit eliminates the quarantine requirement currently in place at many OEM aircraft maintenance facilities. The price of the ground Ion Distribution Unit (PN ACA4800GU-1) is US$7,300.

During flight, I’ve gotten into the habit, thanks to a retired Canadian Air Force pilot friend, of wearing gloves (now our new norm). They have become another layer of skin, with an exceptional tactile feel and are smart-device friendly. Of course, when you get home, wash your hands and don’t forget to wipe down your car. Hopefully we can all work through our new social norm and the impact to our flying.