Airlander, the world’s largest aircraft, reached another milestone in its Return to Flight program with its first helium fill. On Saturday, October 31 at 10 pm, the aircraft was floating for the first time at its Hangar in Cardington, Bedfordshire, U.K.. 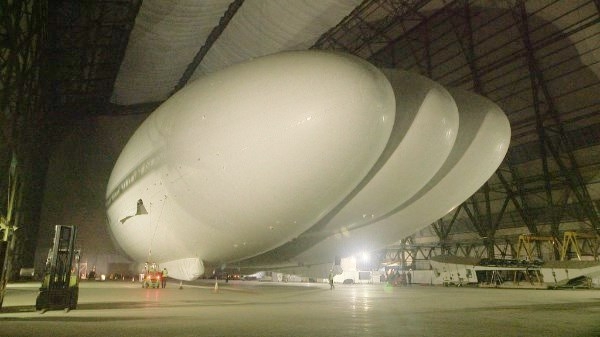 The 92 metre-long Airlander was “walked” the entire length of the 248 metre hangar to get to the front doors of the Hangar.  This involved four fork lift trucks, one at each corner of the Airlander, each carrying a two-tonne block of cement with a restraining rope attached moving in unison.

During the months of November and December, the key parts of the Airlander (the engines, fins and Mission Module) will be finalised and integrated onto the Airlander.  From early 2016 a series of ground tests will take place inside and outside the Hangar ready for first flight during the first quarter of 2016.

HAV’s Technical Director, Mike Durham said, “Seeing the Airlander come to life and floating was simply breath-taking.  This is a key moment for the UK’s aerospace industry in getting this unique aircraft ready for flight.”

Airlanders are low noise, low pollution, and environmentally-friendly. This capability is recognized today, by being selected as one of the showcasing companies at the leading environmental conference, Cleantech.  Airlanders have ultra-long endurance, and a point-to-point cargo-carrying capacity.  They can take off and land vertically and operate from a range of remote environments including water, desert, ice and fields. Airlander is the global leader in the independently validated $50 billion market for this new green aircraft technology. The company expects that 1,800 new jobs will be created in the U.K. in the next five years.

They are useful for any long endurance tasks such as coastguard duties, military and civil surveillance, filming and academic research.  In passenger configuration they are likely to carry 48 passengers in luxury for tourism and pleasure flights, and the Airlander is currently undergoing market testing of an overnight luxury passenger service and a business city-centre to city-centre sleeper service.  Airlander will carry up to 10 tonnes of cargo, and fly half way round the world on a single tank of fuel.

Airlander has already secured more than $60 million of customer funding, more than $6 million of grants and more than $12 million of equity funding. Further funding is being raised now ahead of a planned Initial Public Offering on the smaller company’s Alternative Investment Market (AIM).  The Airlander is building an order book of commercial and military orders for trials and demonstrations and for aircraft sales.

Airlander is actively seeking sponsors for the aircraft and continue to see many people joining Airlander Club, which has many benefits including getting their name on the hull in time for first flight.