Is the picture clearing for Air Canada?, WestJet parteners with Air Transat, More Boeings for WestJet 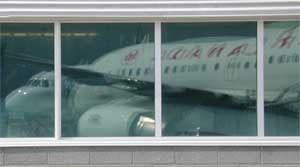 IS THE PICTURE CLEARING FOR AIR CANADA?
The worst could be over
for Air Canada if it emerges from bankruptcy protection with the recent
selection of two potential partners to purchase $700 million in Air
Canada equity and put the airline on more secure financial footing by
the end of the year.

Victor Li, son of Hong Kong billionaire Li
Ka-Shing and co-chairman of Calgarybased Husky Energy, will face off
against New York assetmanagement firm Cerberus Capital Management LP
for the dubious honor of becoming Air Canada’s major shareholder with
as much as 60% of the airline in return for its $700 million capital
infusion. The finalists were selected from an initial list of 12 groups
who submitted equity offers to Air Canada. Both offers are structured
to take into account Canadian law that prohibits any foreign investor
from owning more than a 25% voting share in Air Canada.

What do
we know about these two bidders? Li is a Canadian citizen, but spends
most of his time in Hong Kong. He is reportedly interested in keeping
Air Canada in Canadian hands and has a reputation of being a handson
manager. His Hong Kong connections and good relations with the
Communist government in China could one day benefit Air Canada in
securing new routes in that country…

WESTJET PARTNERS WITH AIR TRANSAT
Transat
A.T., the parent company of Air Transat, has signed its biggest charter
deal yet with WestJet Airlines that will allow the tour company to sell
direct flights to southern destinations from markets it doesn’t serve.
Under the two-year agreement, worth $29 million a year to West Jet,
Transat will sell tour packages from Victoria, Abbotsford, Regina,
Winnipeg, Ottawa and Hamilton to the Dominican Republic, Mexico and
Cuba on WestJet aircraft.

Prior to the agreement, travelers in
one of the Canadian markets not served by Transat would have to make
their way to Toronto to board an Air Transat aircraft heading south…

MORE BOEINGS FOR WESTJET
WestJet
plans to purchase two additional Boeing 737-700s next year from the
proceeds of the sale of 5.1 million new shares that is expected to
raise about $150 million. The two new 737s brings to 11 the total
number of new aircraft the Calgary-based carrier will add to its fleet
next year…