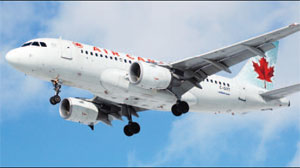 Air Canada has been voted “Best Airline in North America” and “Best
Airline in Canada,” by readers of Global Traveler, an American-based
travel magazine. The annual survey was done between last February and
August and drew over 13,000 responses. According to the magazine, Air
Canada has been working extremely hard over the past few years to
“tweak” and “overhaul” its services and the hard work has paid off.

It
cited recent innovations such as “a la carte” pricing for different
levels of service and for adding new domestic and international routes
and new Embraer aircraft while refurbishing its existing fleet. The
airline also got kudos for adding in-seat power sources and on-demand
audio and video programming in all classes of service. And there’s
more. It also won Global Traveler’s “Wine on the Wing” competition for
best on-board wine from 150 wines submitted by 31 airlines.

Air
Canada is also offering prepaid multi-flight passes that give price
breaks to frequent flyers traveling between Edmonton, Calgary,
Victoria, Vancouver and Abbotsford, B.C. The Western Commuter Pass is
good for up to 10 or 20 flights. WestJet already has competitive fares
and has no plans to offer a rival pass, saying passengers should “do
the math” before deciding whether to book Air Canada.

WESTJET ADDS SEASONAL FLIGHTS
WestJet
said a new route will be launched May 14 between Calgary and the
Kitchener- Waterloo airport with a daily 136-seat Boeing 737 service.
This is the first major Canadian carrier to offer service on a domestic
route from Kitchener. The only other scheduled carrier serving the
airport is Northwest Airlink to and from Detroit. Initially, the
Calgary- Kitchener flights will be seasonal, but could be extended if
successful.

ZOOM TRANSATLANTIC UPDATE
Ottawa-based Zoom
Airlines is bidding to compete on the London-New York transatlantic
market with plans to open a new route between the two cities in June
this year. Zoom currently operates between eight Canadian cities and
five destinations in the UK as well as Paris. But it is seeking
regulatory approval to operate between London/Gatwick and New York/JFK.
It is planning to operate a daily scheduled service using Boeing 767-
300ER aircraft.

If it gains regulatory approval, Zoom will begin
flying the London-New York route on June 7. In a submission to the US
Department of Transportation, the carrier states that it is in the
process of obtaining similar approval for the operation from UK
authorities, adding that it expects to receive the required designation
shortly.

AIR TRANSAT
Air Transat is scheduled to acquire
another A310-300 aircraft in March, bringing the fleet total to 12 of
the type. The aircraft is currently owned by GOAL Leasing and it was
most recently leased to Air Madrid which has ceased operations. The
aircraft was originally planned to be delivered in June, but due to Air
Madrid’s collapse this has been moved forward to a March delivery for
service in April.

WESTJET FOREIGN PARTNERSHIPS
Although
it’s not part of a major global alliance, WestJet has formed
partnerships with four foreign carriers to enable its passengers to
make easier connections.

Its website now offers a link to the
Dohop travel search engine which includes a Canadian page. The four
partners are British Airways, Aer Lingus, Icelandair and Etihad
Airways. The new web feature will speed up research time for travellers
looking for the best connecting flights, although passengers will still
have to book tickets with the other carriers for their overseas part of
their trip.

WestJet is also upgrading its reservations system to
make it possible for American travellers to book WestJet flights on US
travel websites such as Expedia.com. WestJet is already listed on
Travelocity.com.

PROFIT FOR THE GLOBAL AIRLINE INDUSTRY
Despite
declining traffic, the global airline industry collectively expects to
earn about US$2.5 billion this year, the sector’s first profit in over
six years. The forecast is a stark reversal from the International Air
Transportation Association’s prediction last July that the industry
would rack up losses of US$3 billion. Last year, the industry lost a
total of US$500 million. IATA said slower traffic growth and a weaker
global economy will affect airline ticket sales this year, resulting in
revenue growth to slow to 4.5% in 2007 from 8% last year.

“Load
factors…were the good news story for 2006,” said Giovanni Bisignani,
IATA’s director general, who noted North America led all other regions
with an 80.2% load factor, up from 79.5% in 2005. He said the focus
this year is efficiency and while lower oil prices of around $60 a
barrel are a “welcome relief,” they’re still double the price in 2002.

“Bottom-line
improvement depends on achieving further efficiencies across the board.
Airlines have reduced nonfuel unit costs by an average of 3.5% per year
over the last five years. It is time for our industry partners across
the value chain, including airports and air navigation service
providers, to deliver similar results.”