Canada 3000, which ceased operations in November, planned to relaunch as a much smaller carrier 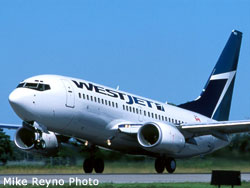 Canada 3000, which ceased operations in November, planned to
relaunch as a much smaller carrier in May under the same name – but the
plan foundered on February 21 due mainly to lack of investor interest.

The development, which occurred just as WINGS Magazine was gong to
press, cast a shadow over the plans of a number of other upstarts,
including Royal Airlines which Canada 3000 acquired last year before
going under. Michel Leblanc, former head of Royal who was subsequently
fired by Canada 3000,was planning to relaunch his own discount carrier
in Eastern Canada if he can get government approval – and financial
backing. He also favoured the old name, Royal Airlines, for his
proposed new entity.

The plan for the rebirth of Canada 3000 was led by founder and
president Angus Kinnear and a group of investors including Apple
Vacations of Pennsylvania,which wanted 25% of the new airline. Through
a holding company,Apple president John Mullen controlled 18% of the
original Canada 3000. Kinnear had planned to begin his new venture with
about 10 leased Airbus A319s and A320s,down from a peak of 41 aircraft
when the company was grounded.The plan called for the fleet to grow to
14 or 15 within two years.He said there were still some assets left
from his previous airline and that debts were being handled by the
bankruptcy trustee.

Kinnear had been negotiating with a number of his former leasing
companies, including International Lease Finance and GATX. Initially,
Canada 3000 was to operate in North America and Europe in summer and to
sun destinations during the winter using A330s.About 1,200 former
employees were to have been rehired for the peak summer season.