All Nippon Airways has placed the first order for Mitsubishi's planned jet, the first made-in-Japan passenger aircraft in three decades. 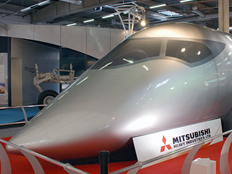 March 27, 2008, Toyko, Japan – All Nippon Airways has placed the first order for
Mitsubishi's planned jet, the first made-in-Japan passenger aircraft
in three decades and a new competitor for regional jets made by
Canada's Bombardier Aerospace.

All Nippon Airways said Thursday it is placing an order for 15
regional jets from Mitsubishi Heavy Industries Ltd., set for
delivery from 2013, with an option for 10 more.

Mitsubishi, a Japanese machinery maker, has been eager to win
orders for the Mitsubishi Regional Jet, and ANA said it was chosen
for reasons of safety, overall economy, passenger comfort and
performance.
The value of the order from ANA – whose fleet includes about 20
Bombardier Dash 8 turboprop planes – is estimated at 60 billion yen
($600 million), based on the catalogue price of four billion yen
($40 million) for each aircraft.

The Mitsubishi Regional Jet is to be a twin-engine aircraft
seating 70 to 90 people. The lightweight carbon-fibre composite
plane is designed to consume about 20 per cent less fuel than
comparable aircraft.

Demand for smaller jets is expected to rise over the next 20
years in regional markets. Mitsubishi's main target markets are
North America, Europe and Japan.

The jet, whose first deliveries could come as soon as 2012, would
compete against products from Bombardier, Brazil's Embraer SA, and
companies in China and Russia that are developing regional jets.

Mitsubishi Heavy _ part of a massive Japanese conglomerate that
includes an automaker, electronics maker and trading company _ has
chosen Pratt & Whitney, a unit of United Technologies Corp., as the
MRJ's engine supplier.

Mitsubishi, long a major supplier for Boeing Co. of the U.S., has
been marketing the mid-sized jet worldwide.