News
Air cadets on a mission

At a time when service clubs and youth organizations are losing ground to busy schedules and gaming, Canada’s Air Cadets and their colleagues on land and at sea are engaged in an ambitious mission. The Canadian Forces has set a target to expand cadet programs to a combined level of 70,000 members as part of a five-year renewal. 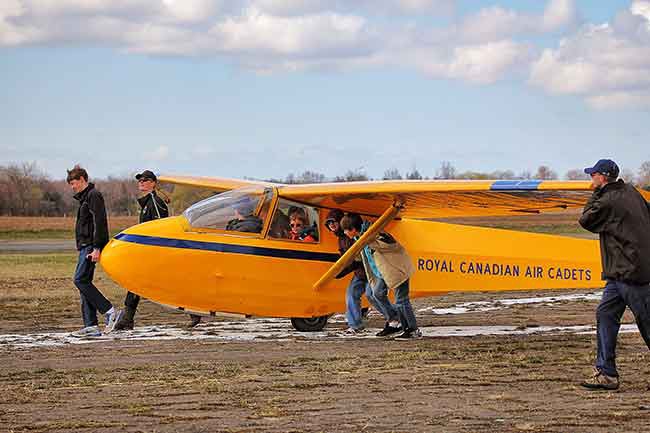 The cadet movement began in 1861 with the creation of the Royal Army Cadets. “The time may come when we can do without armies, but it is not thought that the time will ever come when we shall be able to do without the military virtues of courage, loyalty, qualities of leadership, and the spirit of sacrifice and fair play,” says a provisional school lecture for qualifying cadet instructors in 1933. Turns out Canada still needed both.

The Air Cadet League of Canada (ACLC) was formed in 1941 by First World War flying ace Billy Bishop and others to train young men for the war effort. The ACLC’s Diamond Jubilee next year intersects with the Department of National Defence’s renewal strategy, presenting a platform to showcase some of Canada’s young inspiring men and women.

“Since 1941, more than 1.2 million young men and women have been part of the Royal Canadian Air Cadets (RCAC) and have been challenged to be the brightest and best – to fly the open skies and lead and serve their communities with integrity, loyalty and respect,” Sarah Matresky, executive director of the Ottawa-based ACLC told Wings.

“Taking part in the various activities and participating in the summer camps gave me the opportunities to develop skills and personality traits that are required and used every day in my present career,” says Lieutenant Colonel Maryse Carmichael, commanding officer of Canada’s Snowbirds and alumni of 630 RCAC Squadron in Beauport, Que.

While the Canadian Forces provides a stable pipeline for new members, almost 80 per cent of the 25,000 youth who participate in Air Cadets every year come from non-military homes. The ACLC itself is made up of parents of cadets, retired teachers, pilots, former cadets or members of the aviation industry. The league’s list of partners is an industry who’s who, including Aerospace Industries of Canada (AIAC), the Canadian Airports Council (CAC), WestJet, the Canadian Business Aviation Association (CBAA) and CAE, whose chief executive, Marc Parent was a cadet in 51 RCAC Squadron in Ottawa and 783 Squadron in Montreal. “It is as a cadet that I discovered the fascinating world of aviation for which I developed a profound passion that still drives me today,” he says.

In the mid-60s, consolidation of Canada’s army, navy and air force, the closure of air bases and a shift to larger, long-range aircraft meant that fewer cadets were given the opportunity to learn to fly. It was here that the ACLC inserted itself into the void by launching a glider program. Today, the league operates a fleet of 100 gliders and tow airplanes that 22,000 cadets train on every year, making it the largest glider program in the world. Astronaut Chris Hadfield, who has a squadron named for him in Milton, Ont., won a glider pilot scholarship as an Air Cadet at age 15.

The Diamond Jubilee celebration kicks off in Ottawa November 21, at the ACLC’s Charter Night Celebration gala at the Canadian Aviation and Space Museum, “where they will celebrate the achievements of some exceptional cadets, past and present.” “Over the course of the coming year a variety of commemorative events will be taking place across the country to celebrate the past and shape the future of Air Cadets,” Matresky says. The centrepiece will be The Next 75 Years of Air Cadets, a leadership symposium where cadets from across Canada will be help to plot the future. “I’m particularly excited about the leadership symposium,” Matresky adds. “These cadets have demonstrated their excellence, leadership and commitment to the ideals of the Air Cadet Program.” Every Air Cadet in this country will be presented with a commemorative pin to wear on their uniform to wear as part of the celebration.

According to Transport Canada and the Canadian Air Line Pilots Association (CALPA), one of every five private pilots in Canada caught the flying bug while at Air Cadets, and there is a two-in-three chance that the flight deck of a commercial airliner in Canada has a former Air Cadet at the controls. Others will excel in other fields.

“Watching young Air Cadets develop into these incredible people is one of my greatest satisfactions,” Matresky admits. “Today’s Air Cadets are discovering how to solve problems in scientific, technical, creative and civil ways. They will become tomorrow’s disciplined strategic thinkers and leaders.”