It’s perhaps the cheekiest name in air transport. Boom Technology made noise at this year’s Paris Air Show, announcing it would start testing a supersonic demonstrator aircraft in 2018; a one-third scale prototype leading to a supersonic airliner faster but with almost half the capacity of the 100-seat Concorde. 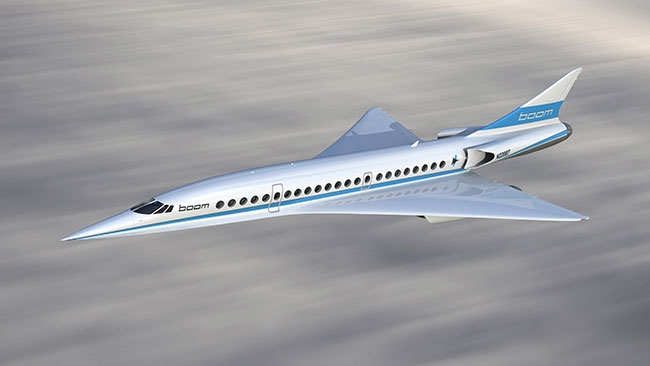 “recent technology will make the Boom SST cheaper to operate than Concorde.” It’s perhaps the cheekiest name in air transport.

It is expected to enter passenger service in 2023 – 20 years after Concorde exited the field. Despite a yawning 50-year technology gap from when Concorde first flew, comparisons with the earlier supersonic transport (SST) are inevitable.

“Concorde designers didn’t have the technology for affordable supersonic travel, but now we do,” said Blake Scholl, founder and chief executive of Denver, Col.-based Boom.

After Concorde, air transport slowed down rather than pick up speed for the first time in its history. Now a new burst of speed could be on the horizon. At US$200 million a copy, Boom has orders for 76 airplanes from five airlines, including 10 by launch customer, U.K.-based Virgin Atlantic. It’s certainly an impressive start. By 1967, Concorde had booked options for 68 SST’s from 16 airlines. Fifty-two of those options would vanish by early 1973, including four headed to Air Canada. Only nine would enter service.

The difference is Concorde options offered no customer risk whereas, according to Scholl, customers for the next generation SST have plunked down non-refundable deposits in the tens of millions of dollars. “We now have everything required to build history’s first independently developed supersonic aircraft – the funding, technical design and manufacturing partners,” Scholl told the U.K. Telegraph.

Thanks to venture capitalists, Boom has approximately US$41 million in the bank to build the single pilot XB-1 demonstrator – nicknamed “Baby Boom” – and complete a flight test program, including supersonic boom testing. That amount likely won’t cover the sales tax on the final bill to develop and bring an SST to market, even with the design’s use of technologies already in service, including three modified, conventional turbo-fan engines and carbon composites, which will enable the aircraft to fly 10 per cent faster than the aluminum Concorde.

Still, there are many impressive names along for the ride, including General Electric, which will supply engines, avionics giant Honeywell and Virgin’s Richard Branson, who will provide engineering, manufacturing services and flight testing support through Virgin Galactic.

It is estimated that British Airways made a profit of up to $30 million a year on its Concorde operations, although much of that was from the novelty charter market. Scholl argues that even with just 100 seats the aircraft was too large and too expensive to operate, and the market too small to support the cost of all first class tickets with a supersonic premium.

“Since the Concorde was developed, the amount of international business and travel has skyrocketed,” he told the Los Angeles Times. “You can find a huge market.”

Even so, Boom is meeting market demand with a 55-seat airplane that the company says will have the same operating costs per seat mile as a business class seat on a subsonic aircraft. Roughly the cost equivalent of an all premium-class A320 flying between London City Centre Airport and New York.

No doubt recent technology will make the Boom SST cheaper to operate than Concorde, but what of the other controversy that followed the newer airplane’s predecessor; the supersonic boom? Half a century later, it ain’t going away. NASA and Lockheed Martin believe they have cracked the code with a design for a Quiet Supersonic Transport (QueSST), which reduces the sonic boom to a “soft thump,” opening the door to supersonic passenger travel over land. The next step is to build and test fly a Low Boom Flight Demonstration experimental airplane or X-plane.

The Boom SST is expected to be only 30 per cent quieter than Concorde, limiting the aircraft to routes over water. Boom plans for a range of up to 17,600 kilometres, putting many Asian destinations with reach of Vancouver. The company has identified 500 viable ‘over water’ city pairs.

Boom is not the only company hoping to re-ignite the passion for supersonic travel, although its timetable appears the most aggressive. The X-plane will not fly before 2021, and Aerion Corporation is planning the first flight of its AS2 supersonic business jet for 2023, the same year the Boom SST is expected to enter service.