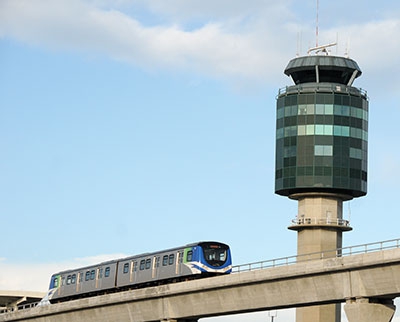 Building a successful airport rail link is more complex than unrolling tracks to the airport’s front door. Toronto is on track to become the first city in Canada with a dedicated rail line connecting the airport with its downtown core.

Toronto is on track to become the first city in Canada with a dedicated rail line connecting the airport with its downtown core. Construction on the 25-kilometre corridor is 99 per cent complete and the Union Pearson Express (UP Express) has taken delivery of the first of 18 Japanese-built rail cars, including 12 diesel driving cars. By spring, passengers will have the option of slicing through road traffic congestion when travelling between Pearson International Airport and Union Station, a multi-modal rail centre (commuter, intercity and subway) that is Canada’s busiest transport hub.

Rail as a means to connect growing cities with neighbouring airports continues to gather speed, although not all systems are as ambitious as the Pearson project. Roughly 80 per cent of airport trains such as Vancouver’s multi-stop Canada Line – the country’s first such link – are light or commuter rail. UP Express is one of just over 20 dedicated airport rail lines worldwide.

Building a successful airport rail link is more complex than unrolling tracks to the airport’s front door. It appears that Metrolinx, a provincial transport agency that built and will operate the Pearson line in addition to GO Transit, the region’s commuter rail and bus network, has done its homework.

UP Express will run a mix of two- and three-car train sets, carrying up to 180 passengers every 15 minutes, the minimum frequency necessary for riders to ensure individual trains are tailored to fit seamlessly with aircraft arrivals and departures. Air Canada and WestJet passengers will be able to check-in for flights at Union Station.

The agency may also want to consider ticket sales on airline web sites similar to an arrangement that London’s Heathrow Express – a model for the Pearson service – has begun with Irish carrier, Aer Lingus. Metrolinx expects approximately 60 per cent of users to be American or international travellers.

For most of the journey, UP Express will run along existing GO track, with stops at two commuter stations, before diverging onto a new three kilometre elevated line into Pearson’s Terminal One. But this is not your typical commuter train. Interiors will feature more spacious seating and extensive luggage space. Amenities include beverage and snack trays, Wi-Fi, flight information screens and onboard payments terminals.

Even so, operators can expect a rocky ride, at least from the start. Hostile reaction to news that a one-way ticket would be in the $30 to $40 price range points to a clear disconnect between the UP Express business model and public expectation of an airport rail service operating at unsustainable fare levels pegged between a subway token and commuter rail ticket (The Vancouver International Airport Authority estimates that 16 per cent of employees within the Canada Line catchment area arrive to work by train.). Metrolinx will not finalize a fare structure until December.

It has been reported that prices will be set according to a number of factors including how deep the province will dip into its own pocket to subsidize operating costs. Metrolinx has not released a passenger profile, but it is expected that at least 60 per cent of riders will be business travellers. The $463 million UP Express is an Alternative Financing Project, but cushioning the cost of whisking higher end travellers to the airport in 25 minutes with public money may be the wrong priority, especially when congested roads and transit systems are crumbling around it.

That will depend on the premium placed on the environmental dividend an air rail link delivers. Canada lags far behind other developed economies in the percentage of passengers arriving at the airport on public transport. The airport operators of the non-subsidized Heathrow Express report that the train has reduced carbon monoxide (CO2) emissions by 204 million kilograms since 1998, and offers a 54 per cent reduction in emissions over a taxi covering the same distance.

Metrolinx expects 1.8 million riders in the first year, taking approximately 1.3 million car/taxi trips off the roads. That is well and good. Still, the question must be asked: if an air rail link is unable to cover its operating costs, should the idea ever have left the station?