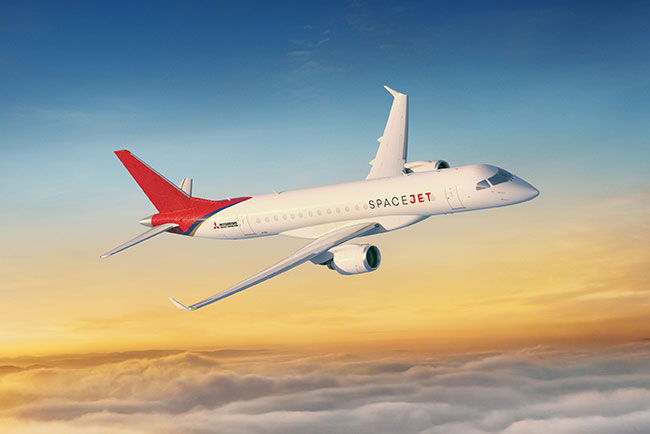 The SpaceJet series will initially consist of the SpaceJet M90 and the new SpaceJet M100. Image: Mitsubishi Aircraft

A deal for Mitsubishi Heavy Industries to purchase Bombardier’s CRJ program will help the Japanese aircraft maker develop and deliver global commercial aircraft. Before the agreement was struck, Mitsubishi used the Paris Air Show to press the re-set button on its chronically delayed regional jet program, Japan’s first airliner since the 1960s. The MRJ90, which enters service next year, has been rebranded as the SpaceJet M90 and M100, a stretched version of the M90 with a larger cabin and fewer seats. More spacious cabins has become a trend in the regional jet sector. Bombardier launched the CRJ550 with United Airlines to replace the obsolete CRJ200. The 550 are reconfigured CRJ700s with fewer seats, larger premium class cabins and an enlarged cabin baggage area.

The 76-seat M100, which will officially launch later this year, is targeted at U.S. operators, where so-called pilot union ‘scope clauses’ have all but frozen out the larger M90. Mitsubishi gambled on more seats eventually being added to those clauses. It didn’t pan out. The M100 hedges that bet with the chance to pull Mitsubishi’s struggling SpaceJet program out of its sales doldrums. But not without Bombardier’s regional jet expertise and strong sales and support network, the missing ingredient in the Japanese firm’s global strategy. Especially as the regional jet landscape shifts with Boeing as the prime competitor.

Bombardier is out of the airliner game. Alain Bellemare made that clear when he told investors, “[We] want to focus on business aircraft going forward. That’s where we are putting our chips.” This raises a question: can the sale of Bombardier’s last remaining commercial air transport property – a 31 per cent stake in Airbus Canada Limited Partnership (ACLP), the holding company for the A220 – be far behind.

John Leahy, Airbus’ retired salesperson extraordinaire once dismissed the C Series as Bombardier’s “orphan”. An outlier in the company’s core regional jet and Q400 turboprop lines. With airliners out of the frame, the A220 is pushed further to the margins of Bombardier’s business jet and train portfolios. While Bombardier cannot be blamed for ditching the money-losing CRJ program, where does this leave Montreal as a builder of airliners? Exactly where it is, at least for now. In addition to work on the CRJ500, Bombardier’s backlog for the CRJ900 stands at 46, ensuring production runs until the end of 2020. Still, the end is in sight for the CRJ, as the program falls further behind Embraer’s re-engineered EJets and Mitsubishi’s clean sheet M90s and M100s. Mitsubishi will not move dwindling CRJ work to Japan. But building the M100 close to its U.S. customer base cannot be ruled out.

Boeing’s home state of Washington has been tipped as an early favourite. Mitsubishi Aircraft is opening a new U.S. headquarters in Renton and the M90’s certification flight-testing took place in that state. For about US$750 million in cash and liabilities, Mitsubishi has bought itself a turn-key regional jet platform that puts Montreal in play, but likely not without additional government money.

The Quebec government has a 19 per cent stake in ACLP and ruled out added financial support for the CRJ. However, luring Mitsubishi’s clean sheet M100 aimed at replacing ageing Bombardier and Embraer jets might be a more attractive proposition.

Airbus wrapped up a relatively quiet Paris Air Show with commitments for 85 A220s (firm orders, letters of intent and memorandums of understanding), including orders from two leasing companies, a piece of the customer mix that Bombardier struggled to crack. The good news for Mirabel is that while 65 of these aircraft are from U.S. customers and should be headed to the A220 assembly plant in Mobile, Alabama, 50 for Los Angeles-based Air Lease will be built in Quebec. The U.S. International Trade Commission’s earlier ruling in favour of Bombardier over Boeing gives Airbus greater flexibility in where it builds the A220. Airbus’ current plans are to produce 10 A220s a month at Mirabel versus four at Mobile, when the program is completely ramped up.

Canada pioneered the regional jet and developed the C Series, which carries the potential to revolutionize the under 150-seat sector. Bombardier’s sales and support infrastructure was never strong enough to support the C Series, but will serve as a lifeline to propel a new generation of regional jets. After a stint as the world’s third largest supplier of commercial airliners, the industry is no longer ours, and decisions will now come from Toulouse and Tokyo.