The virtual control tower grabbed news headlines in Britain this spring, when London City Airport took the wraps off its plan to open the U.K.’s first digital air traffic control (ATC) tower in 2019. Controllers will have a 360-degree view of the airfield – approximately 130 kilometres away. Fourteen high definition cameras, two pan-tilt zoom cameras and sensors will give air traffic controllers a level of detail greater than the human eye, alongside the noise of the airfield. 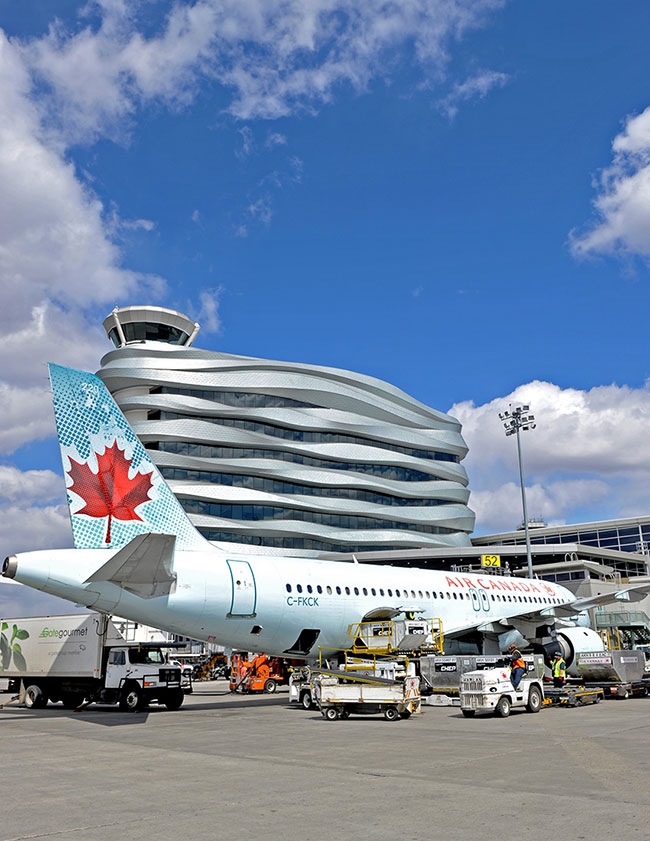 “Digital towers are going to transform the way air traffic services are provided at airports.” The virtual control tower grabbed news headlines in Britain this spring

Flying below the radar, but just as important to Canada, was the announcement that NATS had partnered with NAV CANADA to take an equal stake in Seabridge Technologies, an Ottawa-based firm specializing in remote ATC operations.

In 2006, Moodie Cherkin and Alex Sauriel launched a tech company in search of a problem looking for a solution. At around the same time, LFV, Sweden’s air navigation service provider and Saab, a Swedish military and aerospace technology company (including the Saab 340 and 2000 regional turboprops) partnered to develop remote ATC tower technology.

Sweden’s Ôrnskôldsvik Airport, became the first in the world to operate using a remote tower service (RTS) in April 2015. A second local airport was added last year, and by this summer, Saab expects to have three airports being served by 16 controllers at the same remote location, with separate screens showing real-time activity at the different airports.

“During the test period, we informed the airport and airlines concerned that we would control traffic partly from the on-site tower and partly remotely from Sundsvall, but we didn’t tell them exactly when. They didn’t notice any difference, which was the best feedback we could get,” said Erik Bäckman, an air traffic controller and head of the remote tower centre in Sundsvall.

Seabridge’s Cheikh and Sauriol also landed remote ATC technology long before the first airplane had landed at Ôrnskôldsvik using the remote tower service. “What is going to restrict growth [at airports] is that there won’t be enough room on the ground,” Cheikh told the National Post. “We decided to focus on technology to help airports and air traffic control providers increase efficiency in that area.”

For isolated airports in Canada’s North, with very little traffic spread over lengthy periods, remotely operated air traffic control has the potential to reduce the cost of local ATC infrastructure. Avinor, Norway’s state-owned airport operator, plans to link up to 15 airports to a single remote operations centre located above the Arctic Circle. Avinor, which operates 46 large and small airports, estimates that operating air traffic for several airports from one remote location could cut costs by 30 to 40 per cent, while also avoiding investment costs for new or upgraded control towers. Remote technology can also add a new layer of safety at uncontrolled airports.

The potential extends beyond small and remote airfields. “Today even large airports may need to invest in a remote tower system as contingency and other digital services linked to air traffic management,” said Niclas Gustavsson, Saab’s vice-president of business development and government affairs. “The remote tower is driving the business transformation within the industry.”

Seabridge already serves major airports in 35 countries, including remote ATC trials at airports in Budapest and Milan, and was the first in the world to install an operational video system in an ATC tower. This year at the World ATM Congress in Spain, Seabridge unveiled Aimee, the world’s first artificial intelligence platform for air traffic management. “Artificial Intelligence is enabling a new tier of applications across all of aviation,” Sauriol said. “With Aimee, we are making it easy for our customers to conceive, develop and implement new operational solutions that enhance safety and improve efficiency.”

NAV CANADA, the world’s second largest air navigation service provider by traffic volume, bought a controlling interest in Seabridge in 2010. For larger airports, at least, the digital transformation will likely be used to serve as a reserve control tower.