It has been described in a recent CBC report as the most successful closure of a military base in Canadian history. The 1989 shuttering of CFB Summerside in Prince Edward Island set a course for a high-value aerospace industry. “There was no centre in this part of the world that was totally dedicated to repair and overhaul of aircraft,” Cliff Campbell, a co-architect of P.E.I.’s aerospace strategy told the CBC. 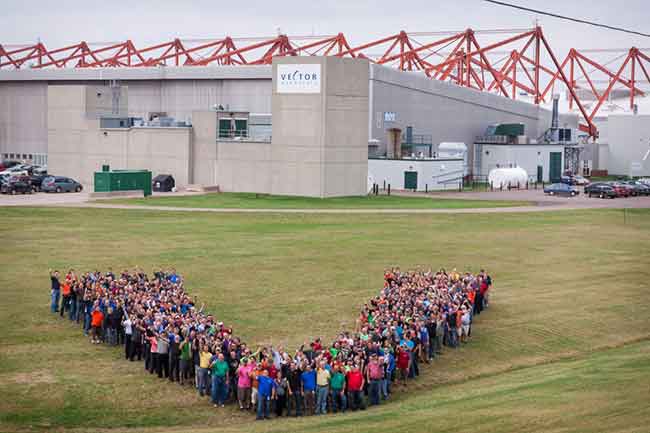 Vector has an impressive 98 per cent retention rate and is named one of the best places to work in Atlantic Canada. It has been described in a recent CBC report as the most successful closure of a military base in Canadian history.

Today, aerospace and defense is P.E.I.’s fastest growing industrial sector, and its second largest exporter; a $405 million a year business that drives more than 1,300 jobs, the bulk of them homegrown talent. At its heart is Vector Aerospace, the second largest private employer on the Island after frozen potato products giant Cavendish Farms, and one of two aviation companies that saw potential in a rag tag of huts and hangars abandoned by the military.

“There was significant pressure on the federal and provincial governments to do something with the infrastructure that was left behind,” Jeff Poirier, president of Vector’s Engine Services – Atlantic division, headquartered in Summerside tells Wings. The pressure was picking up speed about the time Air Atlantic, a Newfoundland-based airline, was casting about for a location to perform engine maintenance on its fleet of Dash 8 turboprops.

In 1991, Atlantic Turbines Incorporated (ATI) opened for business at Slemon Park, the new industrial park that had risen from the ashes of the air force base; its neighbour was a subsidiary of Allied Signal, now part of Honeywell. Poirier, a native Islander, joined the company in 1993, straight out of Holland College in Summerside. He has watched the company grow from 35 employees servicing up to 20 engines a year to approximately 475 employees overhauling the same number of engines every week. The turning point came in the early-1990s when ATI grew out of an exclusive contract with Pratt & Whitney Canada and could perform third party work.

The Atlantic division accounts for about 40 per cent of Vector’s global network, and is the top performer among four divisions. Vector has gone through five expansions at Slemon Park, including this year’s opening of a new engine test cell capable of supporting turboprop engines producing up to 5,000 shaft horsepower.

Whereas the U.S. once accounted for 90 per cent of billings, revenues are more evenly spread, with 40 per cent of work coming from outside North America, mostly Africa and the Australia region.

Ease of logistics has made P.E.I. less of a geographic challenge. Engines can be flown in from almost anywhere in the world within a couple of days. It’s a marked change from the ’90s when Vector had a dedicated trucking company shuttling engines to the mainland; or pre-Confederation Bridge days when workers relied on the ferry service with everything timed around when the next boat was leaving.

There are still logistical challenges, Poirier admits. “Even now when extreme weather closes the bridge we can lose up to 14 hours. One thing that sets us apart from our competition is the speed of which we turnaround engines.”

Another challenge is skills. Vector has an impressive 98 per cent retention rate and is named one of the best places to work in Atlantic Canada. In 2000, after almost doubling its workforce overnight, the company partnered with Holland College to build a course on gas turbine basics. Approximately 85 per cent of the workforce are Holland College graduates and Vector snaps up a high percentage of new grads each year. Still, the pressure is on to backfill a pending wave of retirements and supporting growth while Slemon Park, now a provincial Crown corporation, redevelops to cash in on opportunities such as the global demand for military defence training.

About 90 per cent of Vector employees are Islanders or Islanders who have returned for the work. “There is no other MRO shop that can compete with Summerside,” Poirier reflects. “It is a culture that is very difficult to replicate. It really comes down to the 475 team members that are here in Summerside.”