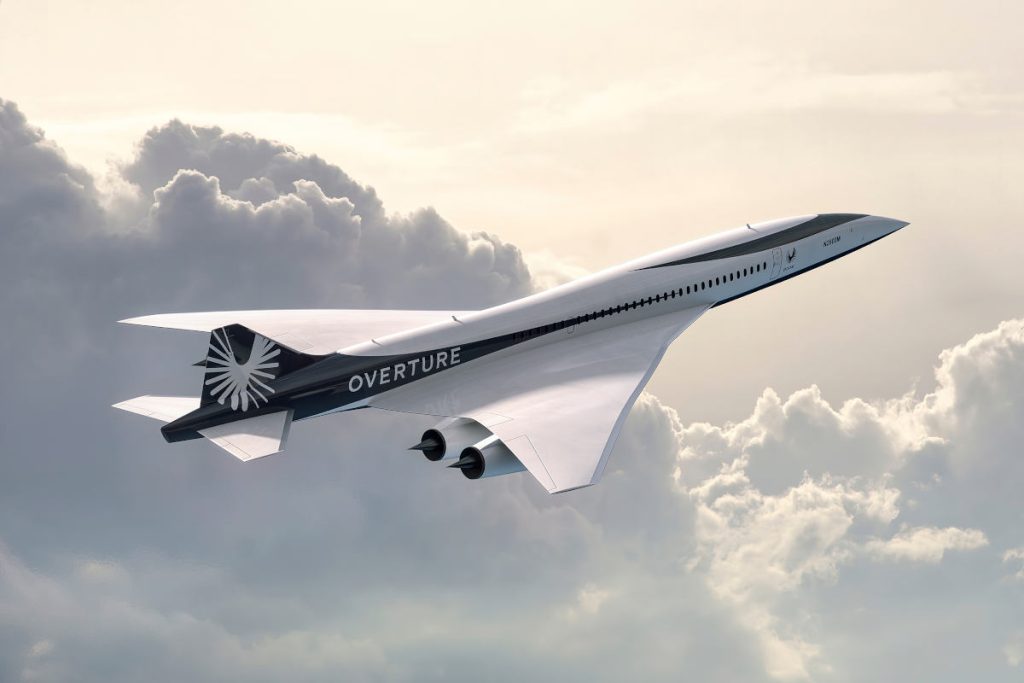 Boom expects Overture will be able to fly more than 600 existing airline routes around the world in as little as half the time, such as flying from Miami to London in just under five hours. (Image: Boom Supersonic)

American Airlines on August 16 announced an agreement to purchase up to 20 Boom Supersonic Overture aircraft, with an option for an additional 40. American has paid a non-refundable deposit on the initial 20 aircraft. Boom is developing Overture to carry passengers at twice the speed of today’s fastest commercial aircraft. Overture is slated to roll out in 2025 and carry its first passengers by 2029.

Under the terms of the agreement with American Airlines, Boom must meet industry-standard operating, performance and safety requirements as well as American’s other customary conditions before delivery of any Overtures. Back in June 2021, United Airlines announced its plans to purchase 15 supersonic jets from Boom with an option for 35 more.

“Looking to the future, supersonic travel will be an important part of our ability to deliver for our customers,” said Derek Kerr, Chief Financial Officer, American Airlines. “We are excited about how Boom will shape the future of travel both for our company and our customers.”

Boom Supersonic on July 19, 2022, unveiled what it describes as the final production design of Overture and also announced a new partnering agreement with Northrop Grumman to develop special mission variants of the aircraft. Aiming to carry 65 to 80 passengers at twice the speed of today’s airliners, and to also run on 100 per cent sustainable aviation fuel, Overture is being built to fly Mach 1.7 over water with a range of 4,250 nautical miles.

The new aircraft design, revealed at the Farnborough International Airshow, is the culmination of 26 million core-hours of simulated software designs, five wind tunnel tests, and the evaluation of 51 full design iterations. Boom notes Overture should be able to fly more than 600 existing airline routes around the world in as little as half the time, such as flying from Miami to London in just under five hours and from Los Angeles to Honolulu in three hours.

“We believe Overture can help American deepen its competitive advantage on network, loyalty and overall airline preference through the paradigm-changing benefits of cutting travel times in half,” said Blake Scholl, founder and CEO of Boom.

At Farnborough, Boom also outlined plans to begin outfitting The Iron Bird, a new 70,000-square-foot hardware ground test facility in Centennial, Colorado, to house its first full-scale Overture testing model and flight deck simulators. Earlier this year, Boom announced its selection of the Piedmont Triad area for its first Overture Superfactory, which remains on track to begin production in 2024.

Key features of Overture, as outlined by Boom Supersonic

Four-engine design: Overture will be powered by four wing-mounted engines that enable the airliner to cruise at Mach 1.7 over water and just under Mach 1 over land. The four-engine design also reduces noise while also decreasing costs for airline operators.

Quieter operation: On take-off, Overture will use the world’s first automated noise reduction system. The airliner will fly without afterburners, meeting the same strict regulatory noise levels as the latest subsonic airplanes.

Gull wings: The aircraft’s wings are sculpted to enhance supersonic performance as well as improve subsonic and transonic handling. Importantly, according to Boom, the wing shaping also helps ensure safety and stability at any speed.

Net zero carbon: Overture has been developed from the beginning to be net zero carbon, flying on 100 per cent SAF.