Features Operations
An Inside Look At The Challenger 300

Bombardier has developed a “clean sheet” aircraft while maintaining the familiar look of the Challenger. 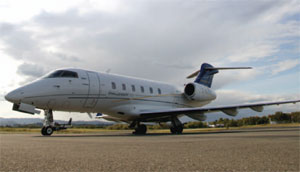 Being given the opportunity to do a flight review on the new Bombardier
Challenger 300 was similar to a homecoming or so I thought. With an
extensive background on Challengers from instructing to flight
operations and a year of flying the Global Express, I figured this
assignment would be nothing more than a review of Bombardier products
already flying. Little did I know what was in store. After arriving in
Wichita on a bright, cold December day, I was greeted by Bob Agostino
and his team at Bombardier Flight Operations. Having known Bob from
previous days at Flight Safety where he was the student and I the
instructor, I figured this would be even more enjoyable. As some
readers may know, Bob is the architect of the now famous “aviation
safety stand down” that he runs each year in Wichita. Started as an
internal operation it has now grown to include outside participants
along with well known aviation personalities and is getting to the
point where it should be a “must do” for all professional pilots. Bob
is the epitome of safety. He lives, breathes and talks it all day. On
this particular day the briefing for the flight started and ended
approximately 8 hours later. Most flight demonstrations start with a
brief oral introduction and then directly on to the aircraft for the
flight. This briefing was the most through, extensive and professional
briefing I have ever received. At the end I even felt like I already
knew this aircraft well enough to receive a type rating! Safety was
incorporated into all aspects of the flight including egress of the
aircraft in the unlikely event of an emergency. Well done to Bob and
his flight operations people.

The
Bombardier Challenger 300 (formally Continental) was developed
following two years of intensive market research. The Challenger 604
had reached 25 million in the market place and there was a definite
void in Bombardier’s product line between the Lear 45/60 and the 604.
Developed as a super mid-size jet, the Challenger 300 competes with the
Hawker Horizon, Gulfstream G200, Falcon 50EX and the Citation X in the
under 20 million marketplace. With a range of 3100 nautical miles with
8 passengers and up to 3311 miles with 4 passengers this aircraft will
see its fair share of open water. Additionally with a takeoff distance
of 4720 feet at maximum takeoff weight and typical landing distance of
2200 feet, it should be quite comfortable on shorter runways. Full
Transport Type Certification was achieved on May 30, 2003 after a
program launch in June, 1999. First flight was achieved a mere two
years later on August 14, 2001 which certainly stands as a record.
Entry into service followed on January 8, 2004 and approximately 28
Challenger 300’s are flying today. Delivery time from a purchase order
being received is approximately two years which attests to the growing
popularity of this aircraft. The fleet leader is Bombardier’s FlexJet
Program which has 8 aircraft with each one averaging approximately 100
hours per month. Total fleet aircraft flight hours have now exceeded
6000 hours.

WHAT’S DIFFERENT?
Seeing this aircraft for
the first time gives one the impression that all we have is another
Challenger which, of course, begs the question “why?” But Bombardier
has developed a “clean sheet” aircraft while maintaining the look of a
Challenger only in appearance. To give a complete analysis of the
differences would fill more space than allowed for this article but, in
short, the aircraft was designed with simplicity and conventionality in
mind – a throwback to the old days which is somewhat of a surprise in
this day of rapid advancements in aircraft design, i.e. fly by wire.
The biggest change found was a DC electrical system. The only AC on
this aircraft is in the 115 volt outlets in the cabin for plugging in
computers, etc. Advancements in computers have allowed Bombardier to
actually save weight by using DC and take advantage of the simplicity
of DC. Install a battery and away we go! For those of us familiar with
the 3 independent hydraulic systems of the original Challenger, we now
have 2 independent systems backed up by an auxiliary system. Gone too
is the Air Driven Generator (ADG) although offered as an option at
purchase. Flight controls too have changed back to the manual system of
cables although the rudder and elevator controls are mechanically
controlled but hydraulically operated by Power Control Units. All in
all this means fewer hydraulic components and reduced maintenance
costs. Another major departure for Bombardier has been the change from
General Electric engines to the Honeywell HTF 7000 engine based on the
original TFE731 engine design. This new engine has a 4.2 high bypass
ratio and develops 6826 pounds of thrust at ISA +15 degrees Centigrade.
Bombardier has also incorporated Full Authority Digital Engine Controls
(FADEC) allowing simplicity of engine controls by pilots. Cost of
engines operation is being advertised as 40 percent lower than
competitors!

(APU)
mounted in the tail cone and which is used on the CRJ200 airliner. This
well proven APU is certified useable to 30,000 feet. A single access
panel allows easy access to replacement of all Line Replacement Units –
a major advantage for easy maintenance and serviceability. The cockpit
has the Rockwell Collins Pro Line 21 Avionics package. Four 12-inch
tubes are fully integrated with onboard avionics. EICAS, weather radar,
terrain, lightning and TCAS information are all presented on a single
Multi Function Display (MFD) This cockpit, unlike most other
manufacturer’s has been designed by pilots including Bob Agostino and
his team along with test pilots and engineers. I am sure all pilots
reading this article can appreciate this development as we have all
experienced the “why did they put it there?”

FLIGHT CHECK
The
next morning and after being suitably hosted the night before by the
folks at Bombardier, I was introduced to Challenger 300, S/N 005, one
of the original test machines with about 1500 hours total flying time
on the airframe. Bombardier had installed their custom pre-fit interior
to the aircraft and although not very lavish in appearance, nontheless
showed very well. With a forward galley, rear lavatory and walk-in
baggage bay, it once again reminded me of the Challenger 600 series.
However, it was noticeable that the cabin width was 2 feet shorter than
the Challenger but with the same length and height. Settling into the
left seat with a company safety pilot, I was immediately impressed with
the cockpit layout. After very briefly scanning the cockpit I felt
comfortable enough to ask for the prestart checklist. Having little
problem finding checklist items, we were soon starting engines and
taxiing for takeoff. Taxi time to the runway was short but enough for
me to realize that this aircraft rode very well and required little
braking to control speed – unlike the other Challenger series that at
times requires riding the brakes or deploying a thrust reverser to
control speed.

Takeoff consisted of applying full thrust to the
takeoff detents allowing the FADEC system to control the thrust
setting. Directional control was easily achieved by rudder inputs and
without using the nosewheel steering. Once airborne and hand flying the
aircraft I found that the aileron and elevator controls were light and
responsive but not as direct as the original 3000 psi controls found on
Challengers. Again a throwback to the “old” days of flying!

What
followed next was nothing short of amazing. Climbing directly to 35000
feet and slowing to 150 knots indicated, I was soon doing 30 degree
bank turns. Try doing that in other corporate jets and see what
happens! This aircraft was completely stable with good roll response.
Not stopping here, I increased speed to 200 knots while still in the
turn and climbed up to FL410. Again, quite effortless and easily done!
Bringing the thrust lever up to the cruise detent the aircraft
accelerated rapidly to M.82. Fuel burn at this altitude was an
astonishing 1200 pounds per hour. Bringing the thrust levers to idle
and deploying speed brakes, we initiated a practice emergency descent.
Again no adverse reaction from the aircraft and little vibration from
the boards. Entering the downwind for runway 01R at Wichita, the
approach again reminded me of the Challenger with its flat nose down
angle. Flare was merely more than checking the descent rate and with
the trailing link gear, touchdown was smooth and effortless. Brakes on
this aircraft are extremely good also and with 2000 landings being
advertised before replacement should cause no undue harm to maintenance
costs. On the next and final landing I was challenged to a full braking
stop. What an opportunity! Not owning the aircraft and not having to
pay the cost of replacement parts, I placed my feet on the brakes and
started pushing down before the wheels hit. At touchdown, I pushed what
I thought was as hard as possible but my friend in the right seat kept
saying “harder, harder”. Without full shoulder harnesses on there was
no way we would have stayed in our seats. Landing distance was
calculated at about 16-1700 feet. Not bad for a 27000 pound landing
weight aircraft! After shutdown, I took a quick look at the brakes
expecting them to be overheated, but although warm, they seemed ready
for another go.

All in all, Bombardier has built a very
competitive aircraft in the super mid-size category. This aircraft
should sell very well in the under 20 million marketplace and cause
fits for other manufacturers – much like the original Challenger did
more than 20 plus years ago.