Regulators are concerned that ‘glass cockpits’ may be like a wonder drug whose negative side effects appear only later. 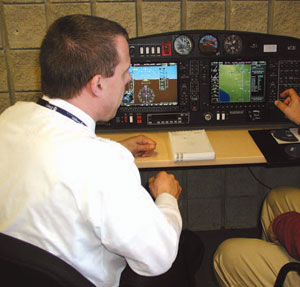 Regulators are concerned that ‘glass cockpits’ may be like a wonder
drug whose negative side effects appear only later. Flying schools,
manufacturers and insurance companies share their anxiety.

“Whether
glass cockpits provide a false sense of security is an overwhelming
concern to all of us,” said Brent Errington, of Empire Aviation Ltd. He
runs the two-day DA40- Garmin G1000 transition course for Diamond
Aircraft in London, Ontario. “We haven’t seen any trends, but we
emphasize the need to be aware of aircraft and avionics limitations.”
Most glass cockpits in general-aviation aircraft are in planes
certified for single-pilot operation. “Information overload is also an
issue,” Errington added.

Glass cockpits have been called the
first real technological leap in general aviation in more than 50
years. The US Federal Aviation Administration (FAA) agrees, and has
designated light planes so equipped as ‘Technically Advanced Aircraft’
(TAA). This is a boon for Cessna, whose Model 172 Skyhawk is now
officially (if G1000- equipped) in the same category as the Diamond
DA40 and the Cirrus SR22.

General aviation training, unlike that
of airlines, large corporate operators and the military, is little
changed since the 1940s. Risk management, decision-making, situational
awareness and single-pilot resource management are seldom taught. All
these subjects are emphasized in the FAA’s innovative FITS (FAA
Industry Training Standards) program. Instead of treating each subject
separately, scenario-based training is standard. Input has been sought
from manufacturers like Diamond, Eclipse and Garmin, insurers,
universities, researchers and instructors.

‘Stick and rudder’
skills won’t be neglected, but most fatal accidents aren’t due to
deficiencies in these areas. The FAA claims it won’t add regulation or
policies to make flying more difficult or costly. Instead, FITS will be
unregulated, voluntary and incentive based.

Middle Tennessee
State University (MTSU) in Murfreesboro (53 kilometres southeast of
Nashville) was one of the first schools to adopt the FITS principles.
NASA has awarded it a US$715,000 contract to answer questions like: Do
glass cockpits give a false sense of security or encourage pilots to
take additional risks? Will pilots become overloaded with information
or too reliant on technology? Will they be so enchanted by the displays
that they spend little time looking for traffic? What are the best ways
to train? Should a licence endorsement or even currency updating be
required?

What is the impact of the lack of standardization
between GPS and glass cockpits from different manufacturers, a special
concern of schools and renter pilots? For years, all makes of VOR
heads, ADFs and navcoms worked the same way. In an emergency, will
pilots revert to old habits?

The project is part of NASA’s Small
Aircraft Transport System research. Eleven Canadian-built Diamond DA40s
(five of them with Garmin G1000 integrated avionics) and a Frasca
highfidelity VFR simulator are being used. One student group is being
trained in DA40s with conventional instruments while a second group
uses the G1000-equipped aircraft. Entry into the latter group is
restricted to students with zero to five hours flying experience. Both
groups take three hours of ground school for 15 weeks, but the
glass-cockpit students have to spend considerable additional time to
become familiar with the G1000.

The instructors hope the
scenariobased training will improve safety like the airlines’
line-oriented training. Every lesson is a mission, rather than an
exercise in manoeuvres. For example, the first lesson is a trip,
instead of the traditional pre-flight and level flight. “Instead of
practising turns around a point, one mission is to scout a car
accident. We want the reason for each lesson to be clear. Exercises
need to be relevant and meaningful. Students learn better if they care
about what they’re doing,” said Aerospace Department chairman Paul
Craig.

The aim is to blend VFR and IFR training. The sixth
lesson includes a GPS approach, while another involves the automatic
pilot. The check rides for private pilot’s licence and instrument
rating were conducted on the same day. The first student to finish had
85 hours when he passed both rides. Now the FAA allows MTSU students to
take the private and instrument checks in a single flight, thus cutting
paperwork. There are no minimum flight hours.

“After 25 or 30
flying hours, students in the new syllabus have broader experience,”
said Craig. “Graduates have better-than-average situational awareness
and decision-making skills similar to those of initial instrument
pilots. We teach experience so graduates don’t have to go through the
dangerous 100- to 300- hour range.” A check pilot from the commuter
airline Independence Air thought MTSU graduates with 100 hours could
transition to the Bombardier CRJ seamlessly.

Students in the
FITS program have fewer problems after 20 hours, while conventionally
trained students have more, preliminary results suggest. When the
G1000-trained group graduates, they will have never flown behind round
dials. The study aims to evaluate their transition to ‘steam gauges.’
Never having learned an instrument scan, will they be able to interpret
needles and maintain situational awareness? Some wonder if they’ll need
a licence endorsement to fly.

Most manufacturers offer a course
on the glass cockpit that their planes feature. Diamond Aircraft’s
course, conducted by Empire Aviation of London, Ontario, covers the
Garmin G1000, its components, capabilities, inputting information, and
emergency procedures. Training emphasizes proficiency with the
automation and recommends using the autopilot full-time. The G1000
manual is a huge loose-leaf binder weighing three pounds, more than
three times the size of the DA40 pilot’s operating handbook. The
checkout in the DA40 took half an hour, while two days was barely
enough for the multi-featured Garmin.