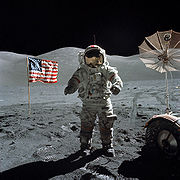 April 29, 2009, Montreal – Gene Cernan, the last man to set foot on the Moon, will be the keynote speaker at the Canadian Business Aviation Association's (CBAA) 48th annual Convention, Trade Show and Static Display.

During 20 years as a naval aviator, including 13 with the National Aeronautics and Space Administration (NASA), Captain Eugene A. Cernan left his mark on history with three historic space missions as the pilot of Gemini IX, the lunar module pilot of Apollo X, and as commander of Apollo XVII.  After flying to the moon not once – but twice — Capt. Cernan became the second American to walk in space.  And he is the last person to have left his footprints on the lunar surface.

This year’s CBAA convention will celebrate the centennial of powered flight in Canada, and recognize and promote the immense value business aviation has brought – and continues to bring – to the economy, progress and international influence of Canada, the second-largest country on Earth, spanning six time zones over more than 5,000 km, coast to coast.

The 2009 convention will take place in Montreal, May 27-29. The host hotel is the Fairmont Queen Elizabeth, while the trade show exhibits and aircraft static display are to be hosted by Skyservice Business Aviation at Pierre E. Trudeau International Airport, Dorval, Quebec.