News
Astronaut Payette’s life has been marked by keen focus 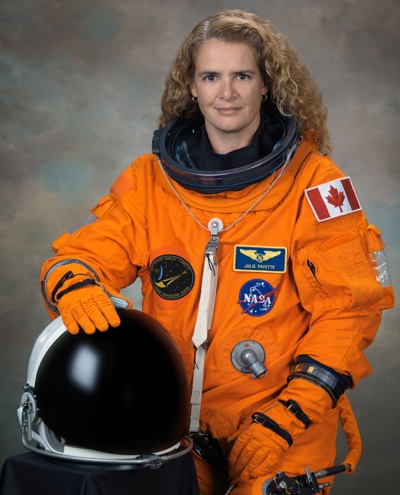 June 12, 2009 – Montreal – To say Julie Payette is focused on her goals is probably an understatement.

June 12, 2009 – To say Julie Payette is focused on her goals is probably an understatement.

In her 45 years, she's been Canada's chief astronaut, an accomplished engineer, a talented musician and singer, an able athlete and a pilot.

Payette is also the mother of two sons, aged 15 and five, and besides speaking English and French has learned to converse in Russian, German, Italian and Spanish.

So what will she be thinking when she blasts off Saturday for her second trip to the International Space Station?

"Focus, focus, focus _ you've got a mission to accomplish," she said in a recent interview with The Canadian Press.

You would be forgiven for thinking all that determination probably precludes a sense of humour. Think again.

Payette drew guffaws before her first mission when she admitted she'd swiped the red rubber nose from a Cirque du soleil clown to bring into space. Her infectious smile and boundless enthusiasm have made her one of Canada's brightest space stars.

The Montrealer with the mop of brunette curls has wanted to go
into space since she was a youngster and saw TV images of Apollo
astronauts poking around the moon.

"I was fascinated by those trips the astronauts made to the moon, by their space suits, by their experiences, the equipment they used – especially the lunar module and the lunar vehicle," she said in an earlier interview. She ached to take the lunar rover for a spin.

Flash forward to 1992, when the Canadian Space Agency plucked her from among 5,330 applicants for just that purpose.

Her achievements had been a major selling point _ engineering degrees from McGill University and the University of Toronto, research on computer systems, language processing and automatic speech recognition. Jobs at IBM Canada, U of T and Bell-Northern Research / Nortel.

So was the international world view she developed as a child and which is embodied in a tiny flag she'll carry on this mission to the space station from her alma mater, United World College of the Atlantic in Wales.

"The 1976 Olympics in Montreal made me realize that there is a world out there," Payette says in a message on the website of the college, where she graduated in 1982. "As a result of the Olympics I had said that I wanted to travel and see more of the world."

Her desire to be an astronaut was among the reasons the school picked her for one of its few Canadian scholarships, reasoning, "the discipline of a British school would benefit me."

Payette was Canada's second woman astronaut – the first was Roberta Bondar –  and served as the Canadian Space Agency's chief astronaut between 2000 and 2007. She was the first Canadian woman to visit the International Space Station when she arrived in May 1999.

The mission propelled her not only into the clouds but into the role of media darling. Interviews and public appearances come with the territory but there were also questions at the time about her personal life and even her views on Quebec sovereignty.

Payette managed to sidestep the issue, saying, "It's tough to see the difference in borders when you're flying around the world at 28,000 kilometres an hour."

Canada does rule among her cosmic condiments, however. On this mission, just like her first,  she's bringing along maple butter as part of her food supply.

As she did 10 years ago, Payette will make history with this mission. When she hooks up with fellow astronaut Bob Thirsk, who is already on the station, it will mark the first time Canada has had two astronauts in space simultaneously.

In 1999, the space station was a far cry from the bustling scientific hub it is now. When Payette first saw it, it was a couple of empty nodules with nobody living inside.

Her first mission was nine days long, had one space walk and included working with one space arm. This time, the mission is 16 days, with five space walks. The crew will work with three space arms.

But nothing that can't be overcome with a little focus.