News
A new player in town 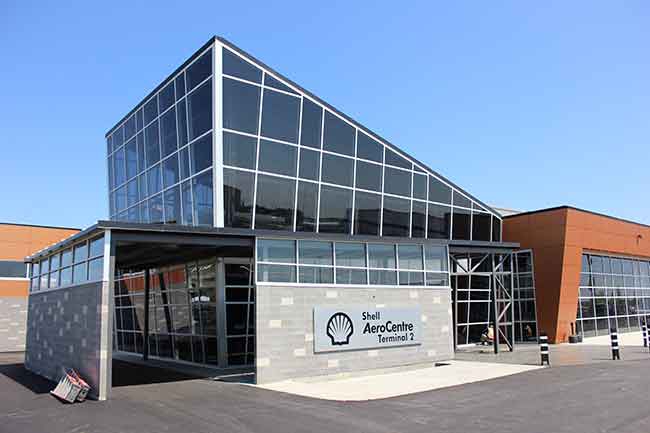 There’s a lot of glass and high ceilings in the passenger lounge which gives it a real wow factor. The Edmonton Shell Aerocentre FBO at Edmonton International Airport (EIA) has almost doubled in size

“We are excited to have a new facility to offer to aircraft owners,” said David Robertson, president of YEG Aerocentre Inc., which owns and operates the two Shell facilities. With enhanced passenger lounges designed to meet Edmonton’s rapidly growing economy and expanding charter business in the oil and gas and mining sectors, Aerocentre 2 offers a 20 passenger VIP lounge for clients and pilots with their own aircraft, an up-scale 150-seat area for air charter passengers and a premier 400-seat, secured passenger lounge for larger groups.

Robertson and his wife, Christine, bought the original Aerocentre in 1994 from another group, which built it in 1979 and was EIA’s inaugural fuelling company. It includes two hangers totalling 26,000 sq ft and 30,000 sq ft of office space and passenger lounge. They sold their Alta Flight Charters business about three years ago to Sunwest Aviation of Calgary in order to concentrate on the FBO business.

“We are really grateful to YEG Aerocentre Inc. for constructing such a great facility to support the surging private and charter aviation growth at EIA. The increased refueling capacity is also a supporting component of our Port Alberta development,” said Myron Keehn, vice-president of commercial development at EIA.

All office and shop space in the new facility is fully leased, with renovated and expanded space still available at Shell Aerocentre 1. Lease tenants include Davis Aircraft Services, an aircraft maintenance organization certified to work on U.S. registered aircraft and Newton Aviation, also providing maintenance service from the new location.

“This is an important milestone for Edmonton International Airport and Shell Aerocentre. The launch of operations at a second facility marks continued growth with capacity to meet increased demand,” said Lyle Witkowicz, Shell operations manager of the Americas.

Shell Aerocentre offers executive 24/7 service for a wide range of aircraft and has serviced military aircraft, celebrity and VIP corporate jets, band, hockey and oil, gas and mining charter aircraft. A larger facility was needed at EIA for the FBO business as passenger numbers are anticipated to grow from 100,000 to more than 300,000 passengers annually. Currently Shell Aerocentre pumps more than 15 million litres of aviation fuel a year and expects to pump millions more with the new facility.

Robertson hopes to grow the business by attracting new clients who are looking for upgraded facilities and through new players entering the market such as Summit Air that operates large aircraft, including a four-engine, 90-pasasenger Avro RJ 85.

“Ours is not a typical FBO facility,” Robertson says. “There’s a lot of glass and high ceilings in the passenger lounge which gives it a real wow factor. When the oil industry bottomed out, a lot of companies cut back their charters, but we are seeing some recovery. Most of the aircraft using our facility tend to buy fuel. Shell is an internationally recognized brand and international traffic tends to look for a Shell facility. ”

Total FBO business at EIA from four facilities, including Shell is around 900,000 passengers and represents an important part of overall traffic, according to Heather Hamilton, director of communications.

“I’m not sure how many other Canadian airports have such large numbers. A lot of the business is in the oil and gas, agriculture and manufacturing development sectors. The numbers are flat or going down a little bit this year, because the oil and gas sector is down.”

With competitive fuel prices, Robertson maintains that some aircraft will stop and refuel at Edmonton FBOs for flights from major U.S. cities to Alaska, for example.

Shell Aerocentre is quite involved in its community. Nearby Leduc High School was asked to produce a company promotional video and the FBO donated some money for the school to buy additional video equipment. In addition, it contributes money to Edmonton’s Stollery Children’s Hospital and continues to fund the Under 12 Girls Winter Soccer League.