News
At The Gate: Banking on the right solution

When Quebec regional airline Pascan Aviation filed for creditor protection in late August, it didn’t look good for the carrier, which was founded in 1999 by career pilot Serge Charron with a single leased Pilatus PC-12. 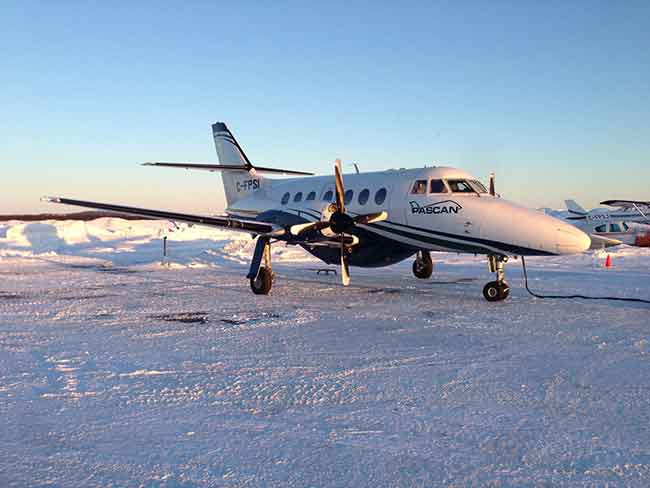 The mining industry is a cyclical business and so is ours and we’re trying to find a magical formula. When Quebec regional airline Pascan Aviation filed for creditor protection in late August

The airline said it will honour reservations and tickets as it restructures its business in parts of Quebec and Atlantic Canada. It said the Business Development Bank of Canada and Investissement Québec are providing a total of $1 million in financial support while Pascan operates under the Companies’ Creditors Arrangement Act.

Based in St. Hubert at a former air force base on the South Shore of Montreal, Pascan provides service to some 16 small destinations mostly in Quebec, but also to Bathurst, Wabush and Goose Bay. Its all turboprop fleet consists of ATR-42s, Jetstream 32s, Beechcraft B100 King Airs and Pilatus PC-12/45s.

But the airline is far from going under, according to Yani Gagnon, vice-president of finance. In April, Pascan reduced service in the hopes of avoiding bankruptcy or at least to undergo a judicial restructuring. The airline is heavily dependent on the mining industry, which has seen better days.

Before it filed for creditor protection, Pascan underwent five years of intensive growth of close to 30 per cent a year, adding new routes and aircraft and new employees to keep up with a mining boom. It also bought the assets of Exact Air with operations in Baie-Comeau, Mont-Joli, Sept-îles and Havre-Saint-Pierre, which included three buildings, three aircraft and other equipment. The $5-million transaction also included the passenger and cargo routes between Havre-Saint-Pierre, Sept-îles and Port-Menier on Anticosti Island. The beginning of the slide occurred in the summer of 2013 when Quebec underwent a construction strike, Gagnon said.

“We tried to adjust to the reality of the situation,” he said. “One day, we’d fly an ATR-42 with 36 passengers to Wabush and the next day we would only have 18 passengers with the same fixed costs. It was a gradual decrease, because we don’t have any customers that represent more than 10 per cent of our business. The mining industry is a cyclical business and so is ours and we’re trying to find a magical formula.”

That magical formula may still be Plan Nord, Quebec’s ambitious project first introduced in 2011 under the former Liberal government of Jean Charest to open the province’s huge northern region to mining, renewable energy and forestry projects. The multibillion-dollar public/private sector project was shelved under a new Parti Québecois government, but is being revised under the current Liberal government. But it hasn’t gained any traction with the low commodity prices.

The Pascan model is to connect small communities to Montreal and with each other as opposed to other carriers that transport customers to Montreal to fill larger aircraft for transborder or international flights. But even those numbers are down. In 2013, the airline averaged 2,200 flight hours per month. Today, that figure is 650 flight hours per month and employment at the airline has dropped from 350 to 150.

“But it’s business as usual,” Gagnon said. “We’ve done our restructuring and it is a sustainable operation. The problem is that we’ve accumulated debt over the past two years.”

Some of the airports Pascan deals with depend on the airline to survive, Gagnon pointed out. It is the only scheduled carrier serving St. Hubert and if Pascan ceases operations, that would be the end of St. Hubert save for a few flying clubs. “The bleeding has stopped and we’ve restructured the business based on the current volume. And we’re at the bottom of the cycle, according to the mining industry and the business is sustainable.”

An important component of the airline’s business is fixed cargo contracts with clients such as Canada Post and courier service Dicom Express. Gagnon wants to expand this portion of the business by going after more government business and to increase its Medivac operations with its ATR aircraft. There is also a promise of new business.

“Some of our customers are bidding on a new hydro project in Muskrat Falls near Churchill Falls,” Gagnon said. “It would be a steady fly in/fly out business where we have developed some expertise.”


Related
Pascan adds Goose Bay to its destination roster
At the Gate: Banking on the CSeries
Pascan Aviation files for creditor protection
At the gate: Taking a different approach