News
At the Gate: Spreading its wings

Since 2005, Discovery Air Defence (DA Defence) of Montreal has been training Canadian fighter pilots under the Contracted Airborne Training Services (CATS) contract from the Department of National Defence. 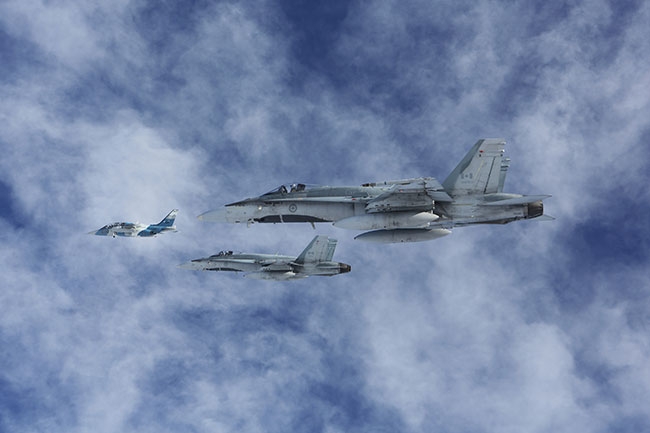 The company was started in 2000 by three former CF-18 pilots. Originally called Top Aces, it provided aviation consulting services to the DND and mainstream original equipment manufacturers before winning the CATS contract. It is a wholly owned subsidiary of Discovery Air, a global leader in specialty aviation services. In March, Clairvest Group, Discovery Air’s majority shareholder, bought the remaining shares it didn’t own and took the company private. In response, Discovery Air has noted, “it’s business as usual,” once the transaction is completed.

Jacob Shavit, president and CEO of Discovery Air Inc. stated, “the proposed transaction is a logical evolution for Discovery Air given our current ownership structure.”

In addition to Germany, the company has spread its wings even further afield. In March, it was awarded a two-year trial contract in Australia to provide Red Air (DA Defence plays the role of enemy aircraft) and fighter support to the Australian Defence Force in conjunction with Air Affairs Australia Pty Ltd. The trial consists of three of DAD’s Alpha jets based at RAAF Base Williamtown.

In February, DA Defence and British-based Inzpire Ltd. joined forces to bid for the U.K. Ministry of Defence’s Air Support to Defence Operational Training (ASDOT) program. The two companies will combine their unique capabilities in the live air training environment to deliver the most innovative, relevant and safe training solution for the ASDOT customer.

But DA Defence is facing competition at home for the CATS contract. Ottawa will select a private company to act as a training partner for Canada’s top guns under a new 10-year contract worth an estimated $1.5 billion with an option for another five years. In addition to DA Defence, CAE in partnership with Draken International of Florida, has also submitted a bid as well as a third unidentified party. Draken offers fighter tactical training for the U.S. Air Force. The winning bid was to have been announced by the end of last year, but may not be revealed before the fall.

The winning CATS bidder will provide aircraft to the Canadian Forces to simulate hostile threats for ground and naval forces as well as fighter pilots. The firm will also provide aircraft to tow targets and carry electronic warfare systems for various training scenarios, according to the information supplied by Public Services and Procurement Canada to industry.

In addition to providing planes and pilots, the winner must also furnish maintenance crews and engineering support. The Canadian government estimates that aircraft operated by the winning bidder will have to fly between 2,500 and 3,500 hours a year.

DA Defence is confident it is in a strong position to keep the business, according to Garrick Ngai, director of marketing at Discovery Air Defence.

“We’ve flown more than 60,000 hours in support of the Canadian and German militaries, so we’ve had the experience, safety and reliability for over 10 years,” he said. “We’ve always performed as required.”

While CAE submitted the bid, the real work will be performed by Draken, which saw one of its Douglas A-4K Skyhawks crash-land close to Nellis Air Force base near Las Vegas in August 2016, when the pilot ejected.

DA Defence isn’t looking to expand into other industries to fuel its growth.

“We’re very focused on Red Air aggressor training,” said Ngai. “NATO countries will get more out of their training budgets by using the training that we’re providing.”

Brian Dunn is a Wings writer and columnist.
Print this page