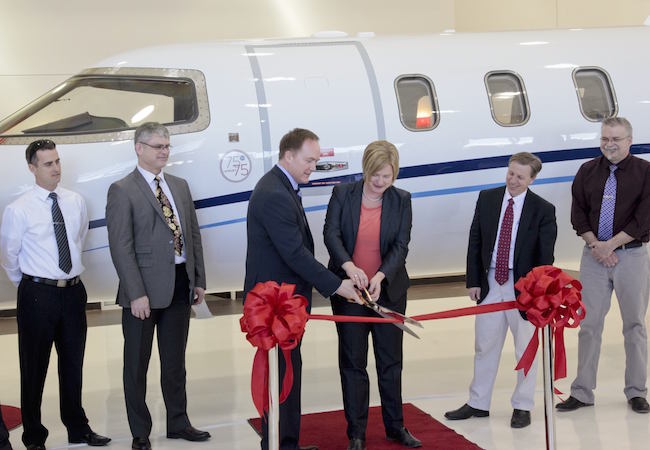 “The 75th delivery of a Learjet 75 aircraft represents yet another high point in the proud history of our iconic Learjet brand,” said Sudduth. “We are very pleased that our friends at Aurora Jet Partners are celebrating this milestone with us as new members of the Learjet family,” she added.

“The Learjet 75 aircraft is valued worldwide for its innovative technology, superior cabin design and legendary performance,” said David Coleal, President, Bombardier Business Aircraft. “We look forward to working alongside Aurora Jet Partners as they take their business to the next level.”

Established in 2007 as a separate division of Morningstar, their Canada-wide express cargo business, Aurora Jet Partners is a fast-growing business aviation company that provides its customers with a full suite of private travel services throughout Canada. Their services include fractional ownership, charter and fleet management and sales from bases in Vancouver, Edmonton, and Toronto. While the new aircraft represents Bombardier’s 75th Learjet 75 aircraft delivery, it is the first Learjet aircraft to enter service with Aurora Jet Partners and an initial step in the company’s plan to renew their older light and mid-size fractional jet fleet as a standard offering. Aurora’s fractional and managed fleet also includes Bombardier’s super-midsize Challenger 300 aircraft, the wide-body Challenger 604 and Challenger 605 aircraft, and the long-range Global 5000 aircraft.

“Aurora Jet Partners is one of the most innovative and progressive private aviation companies in Canada that specializes in providing custom tailored, high-quality private travel solutions to a growing list of discerning clients. We intend to grow the managed and fractional ownership side of our business by adding a modern fleet of Learjet 75 aircraft, which offer tremendous value and utility to our customers and are in a legendary class of their own. We hope to have additional Learjet 75 aircraft in service by year end if 2016 goes as planned,” said McGoey. “We are thrilled to be part of this important delivery milestone and congratulate Bombardier on this stellar achievement.