Ontario’s Ministry of Natural Resources brings flying and science together. 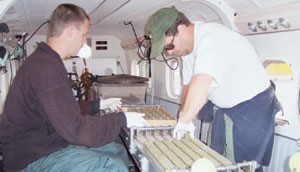 People who think of small planes as toys of noisy joyriders don’t
realize the same planes can be used to ensure greater public health.
After years of research, the Ontario government has found a way to use
light planes to control rabies, and incidentally earn charter revenue
and increase aircraft utilization.

Unless
rabies is diagnosed before symptoms appear, it’s a fatal disease. Thus
the spread of Arctic fox rabies to southern Ontario in 1959 was
alarming. Soon Ontario had more cases of animal rabies than any
province or state in North America. The Ontario government spent over
$6 million a year on diagnosis, investigation of bite reports, medical
treatment, compensation for loss of livestock, quarantine and research.
Pet owners were spending an additional $50 million a year on
vaccinations.

The Ministry of Natural Resources (MNR) recruited
Connaught Laboratories and several universities to help develop a
vaccine that would immunize healthy foxes. Germany and other countries
had tried killing foxes, with poor results. Several vaccines worked
well when handinjected, but live-trapping foxes would be impractical
and perhaps match the cost of a Boeing C-17. The scientists turned to
developing a vaccine that foxes couldn’t ignore. It had to be easy to
produce, store and handle. Most of all it had to get into the fox’s
mouth and be devoured The result was a matchbox-sized flavoured bait,
with the vaccine in a blister pack easily broken by an animal bite.

Australia
had dropped poisoned bait from the air in order to control dingoes. MNR
had no interest in killing animals, but wondered if its vaccine could
be dropped from the air in 1975 a Cessna 172 was used to test baits,
initially without vaccine. Baits were hand-dropped into a PVC pipe that
exited the baggage door. Every second a metronome signalled the need
for a drop to ensure even coverage. Meanwhile a navigator used a
1:50,000 chart to ensure line spacing was even and bushy areas were
covered. The baits contained a biomarker so that when foxes were later
trapped, a tooth sample would tell whether the fox had eaten the bait.

Developing
a prototype bait took until 1988. By then studies had shown that 60-75
per cent of foxes would eat the bait. Red foxes preferred a
chicken-flavoured beef tallow bait, while raccoons liked marshmallow
with icing sugar. Coyotes will settle for dried dog food or fish.

The
next year, a five-year trial used de Havilland Twin Otters to immunize
red foxes in a 30,000-sq-km area of eastern Ontario. Dropping 20,000
vaccine-laden baits per flight required a special machine, a combined
conveyor and spinning, spiked drum that fitted into the floor camera
hatch. Thanks to aerial baiting, rabies cases dropped from 385 per year
to 16 in 1992, of which only half came from foxes. The program was then
expanded to other parts of Ontario. It still operates every fall.

When
three people died from rabies in Texas and the disease spread to 18
counties, the state declared an emergency in 1994. Impressed by
Ontario’s aerial baiting, Texas hired Ontario’s Ministry of Natural
Resources to drop bait in a 15,000-square-mile buffer zone to stop the
spread of the disease. The US $1,300,000 trial was so successful that
MNR crews returned in 1995 and were made honourary Texans by
then-governor George W. Bush. The contract was renewed four times,
while several other American states followed.

American aircraft
operators greeted this foreign invasion with the same enthusiasm
northwestern Ontario firms reserve for American carriers. The pesky
Twin Otters were especially annoying because they were taxicab yellow
and flying at a very visible 500 feet above ground. Eventually American
firms developed technology acceptable to the U.S. government, and local
operators replaced Ontario, except in the northeastern states.

Aerial
baiting is done in the winter or fall, when the Twin Otter fleet is
largely idle. A typical project requires two or three aircraft, each
with an engineer and two pilots. A 15- minute turnaround is long enough
(barely, one suspects) to unload empty bait boxes, reload, refuel and
change crews. As a result, three or four 2-to-3-hour flights can be
done in a day.

Careful navigation is needed to ensure tracks are
the correct distance apart: 2 km for foxes, 0.7 km. for racoons. Before
GPS, Queen’s University developed flight planning software so that one
pilot could flight-plan while another was airborne. When their plane
landed, both the Loran unit and the pilot were changed. BAITRACK,
devised later by OEM Inc. of London, Ont. combines GPS, a computer and
the bait machine. The navigator, usually a technician or a biologist
familiar with animal habits, guides the pilot and turns off the bait
machines over built-up areas.

Tracks can be 200 km long and are
planned to minimize transit time; 18,000 to 22,000 baits are dropped in
a typical flight. Dropping is done at 130 to 145 knots ground speed and
500 feet above ground. In the mountains of New England, altitudes may
range from 200 to 800 feet above ground. Such flying is demanding and
stressful. Apart from the precise track crawling needed, the pilot has
to be alert for hazards like airfields, antennas and, in the U.S.,
low-level military training routes and those irksome temporary flight
restrictions (TFRs). During the presidential election, one TFR was
centred on the candidate’s bus, even when it was moving.

The
radar-carrying balloons along the U.S. border were another hazard.
Their invisible cables may go to 15,000 feet. Drug runners fear them,
but one balloon was lowered temporarily so the MNR Twin Otter could
cover the area.

During the Texas contract many legs ended near
the Rio Grande River, the border with Mexico. Pilot Bill Turcotte was
surprised when two USAF fighters pulled up beside him to check him out.
After an exchange of greetings, and a “Y’all have a nice day,” the jets
made a spectacular departure. Pilot Eldon Germain struck six birds that
left their marks on the windshield, nose, and landing gear. The Texans
jokingly threatened to report him for exceeding his bag limit.

Each
Twin Otter carries three crew members in the main cabin. Working in
confined quarters, one operates the baiting machine, another opens and
stacks the bait boxes, while the third clears machine stoppages. The
slave-like space, heat, noise, turbulence and the smell of some baits
makes these jobs stressful. Airsickness is common. One Texan, Alice,
filled one or two sick sacks on every flight. She was so determined
that she asked for extra flights. One day she disembarked beaming,
without any sack. She was greeted with cheers and was given a coveted
MNR hat, otherwise given only to Texas management. This year MNR
completed another U.S. baiting contract, in Ohio, in April. At the end
of the forest fire season, two or three Twin Otters will cover
remaining high-risk rabies areas in Ontario east of Kingston, and also
do contract flying in Maine, Vermont, New Hampshire and New York.

Ontario’s
success in suppressing rabies is a tribute to the scientists of MNR’s
Rabies Research and Development Unit in Peterborough who devoted 15
years to developing the system and MNR aircrews who employed it while
dropping 62,584,000 baits. Thanks to them, Ontario is no longer a North
American leader in rabies cases. In 2004, only four cases of red fox
rabies and only one of raccoon rabies was confirmed. If the public
knew, they might have a different vew of light aircraft.