Features Operations
Back to the Future 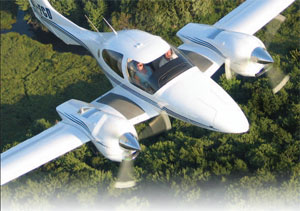 Featuring a futuristic looking carbon-fibre composite airframe, Diamond
Aircraft’s DA42 Twin Star is not your typical 4-seat twin engine
aircraft. The Diamond Twin Star offers astonishing economics due to its
two Thielert diesel engines that run on Jet A fuel. Most recently
certified in Canada in November 2006 (with approval for flight into
known icing to follow), and already certified in the European Union and
in the US for flight into known icing conditions, the Twin Star boasts
a full fuel useful load of 818 pounds at 172 knots on only 12.5 US
gallons per hour total.

It
is not difficult to see what is making the DA42 so appealing to private
owners, businesses and flight schools – substantial fuel savings, the
G1000 glass cockpit, and the extra safety from twin engines and
duplicated systems are just the beginning. Diamond Aircraft has
received orders for five Twin Stars in Canada to date, and a US air
taxi operator, Point2Point Airways, recently started taking delivery of
its first 10 Twin Stars with additional aircraft due to arrive through
the end of 2008. Two Canadian firms were so impressed with the DA42
that each bought the aircraft before it was certified in Canada. Sander
Geophysics Ltd. and Fugro Aviation Canada Ltd., both of Ottawa, bought
DA42s for geophysical surveys overseas, where they can be operated
under American registration. Malcolm D. Imray, aviation manager of
Sander Geophysics, chose the DA42 partly because of its use of jet
fuel. “In much of the world, including northern Canada, avgas is
difficult (to find) and very expensive. On the other hand, high quality
jet fuel is available everywhere at a reasonable price. In addition,
the diesels in the DA42 are remarkably economical and with long-range
tanks, we’ll have great endurance.”

Professor Emeritus Dr.
H.I.H. Saravanamuttoo of Carleton University, a renowned consultant to
major aero engine firms, recently commented: “It’s likely that all new
light planes will be dieselpowered within 10 years.” Rising gas prices
and environmentalists who are eager to abolish leaded fuels are the
main factors, but oil companies would also be glad to eliminate avgas,
a low-volume product. Additionally, engine manufacturers and engine
installers worldwide are excited about the prospects of the market for
replacement engines.

FAMILIARIZATION TRAINING
Training on
the DA42 is provided by Empire Aviation of London, Ontario, located
near the Diamond Aircraft facility. The five-day course includes a
thorough review of all systems and performance, pre-flight inspections
(with outstanding photos of each item), and a Garmin G1000 software
simulator that is used for homework. Five DA42 flights emphasize
emergency procedures and use of the autopilot.

Also available to
trainees, and especially valuable for simulating and preparing for
emergencies, is the first DA42 simulator in North America built by
Diamond Simulation, a Diamond subsidiary. Although Transport Canada
rates it as a Level 5 Flight Training Device, the machine is so
faithful that one dealer completed the flying portion of the course on
it. “We sent two of our pilots on the course and found the training to
be of the same calibre we get from FlightSafety in Wichita on the
(Cessna) Caravan,” said Imray of Sander Geophysics. He plans to send
future DA42 pilots to Diamond’s course. “Many of our customers are
insisting on this level of training.”

THE TWIN STAR EXPERIENCE
Instructor
Steve Kurzbock introduced me to the DA42 at the Diamond delivery centre
in London. The DA42’s cabin is much like the single-engine DA40’s: 45
inches wide, comfortable and bright, with ample knee and head room in
the back seat for six-footers. The leather upholstery is standard, and
except for a gap in the glare shield, the workmanship everywhere was
flawless.

Two large screens of the Garmin G1000 integrated
avionics system – rapidly becoming an industry standard – dominate the
instrument panel. The stand-by altimeter, attitude and airspeed
indicators are ideally situated above, with only a minor tradeoff in
the forward view. I found all controls to be conveniently located.

Starting
the engine is as easy as starting a luxury car. Because the fuel
temperature must be a minimum of minus 30 degrees C, you simply turn on
the master switch (which activates the glow plug briefly), and then
turn the start switch. Vibration is so insignificant that water in a
bottle barely rippled. Also, the low noise from the slowturning props
in combination with advances in modern engine technology make the
aircraft quiet, contrary to the common perception of diesel engines of
the past. To protect against overrotation and a departure stall, a
variable elevator stop is installed. This limits elevator deflection
when both engines have more than 20% power and flaps are in the landing
position. During the pre-flight checks, you can feel the stop when the
power levers are advanced.

At idle power, 900 rpm, the engines
use a mere 0.4 US gallons per hour making tasks such as loading a
flight plan into the G1000 more relaxed. Each engine has two
independent engine control units (ECUs) that compare its condition with
the other. If one ECU is below limits, the other automatically takes
over, and logs the event for later servicing. When the two ECU buttons
are pressed simultaneously, power is increased and the propeller
governor is exercised. Because electrical power is required to run the
engines, the circuit breakers are checked three times during the
preflight activities and redundant electrical systems and power sources
are standard. Overheat detectors in each engine are another safety
feature.

A particularly nice feature on very hot days, the
canopy can be locked in a part-open position. The steerable nose wheel
and wide-track landing gear make taxiing easy, but the 44-ft wing span
needs careful attention in tight situations. Propellers rotate in the
same direction as American engines’, making the left engine the
critical one. After takeoff, power is reduced to 90% load, a figure
easily set because of the digital gauges.

Visibility is
outstanding – there are no doorposts (where traffic can lurk) and a
high cockpit and small engine nacelles ensure a good view to the sides.
Diamond’s singleengine DA20 and DA40 are noted for their
well-harmonized flight controls. The Twin Star naturally feels heavier
than its lighter brothers, and also requires more rudder in turns
because of the glider-like, lowdrag, high-aspect-ratio wing which has
more adverse yaw than planes with a shorter span.

With landing
gear down and approach flaps, a power off stall caused slight buffet
and mild wing rocking. With the stick full aft, you could turn in
either direction, while recovery just required a release of back
pressure. The wing drop in a clean stall was more pronounced, but
acceptable. During a simulated engine failure and overshoot at 5,700 ft
and ISA +7 deg., we had no trouble maintaining a climb of 200 fpm.
Engine shutdown is simply a matter of identifying the failed engine and
turning off that engine’s master switch. A simulated single engine
landing was also uneventful.

Imray wrote, “When operated very
close to the ground in undulating terrain, many twins offer the pilot a
false sense of security … this is because of the poor single-engine
climb performance and the inherent control difficulty if an engine
should fail. The DA42, while not eliminating these problems, offers a
very low minimum single-engine control speed, single-engine maximum
rate of climb speed and extremely simple engine shutdown/ propeller
feathering procedures.

The DA42 is well mannered at slow speeds,
but it is also capable of fitting in with jets at busy terminals.
Landing gear can be lowered at speeds up to Vne 194 knots (the gear
horn can be tested with a button, a useful feature that eliminates
briefly reducing power.) Final approaches can be flown at 82- 90 knots
and the trailing link landing gear makes less-thanperfect landings
bearable.

When Frank Ayers, chairman of the Flight Department,
Embry-Riddle University in Daytona Beach, FL was asked about the
strengths and weaknesses of the DA42 he wrote, “I only found strengths
in the airplane. The G1000 avionics suite is nicely integrated into the
aircraft’s electrical and propulsion systems. The single power lever is
very representative of the jets our students will fly on graduation….
For a fleet user, the fuel savings are significant. Our recent
experience with the DA40 has all been positive. It has proved tough
enough to stand up to students and it is well supported by the factory.
I expect the same of the DA42.”

To add to the DA42’s appeal, and
to allow customers to realize the aircraft’s full capabilities without
the need for additional equipment, Diamond Aircraft will offer
factory-installed oxygen systems. The adjustable-flow system from Aerox
Aviation Oxygen Systems will provide easy access to outlets at all four
stations. The 50-cubic-foot composite cylinder will provide up to 10
hours of oxygen supply for all four occupants at 18,000 feet using
Aerox Oxysaver cannulas, easily adapted to masks if preferred or
required. The entire system weighs under 20 pounds and will cost
$17,552 installed.

Overall, I found the DA42 to be a delightful
machine, with outstanding economy and a perfect balance of performance,
comfort, fun and utility. With the robust power plantpropeller
combination, and an engine with a long history in automotive that has
carried over well into aviation, the DA42 has indeed provided a glimpse
into the future of light twin-engine aircraft.