Features
Bank of Canada keeps key rate at 0.25 per cent, warns of economic decline in 2021 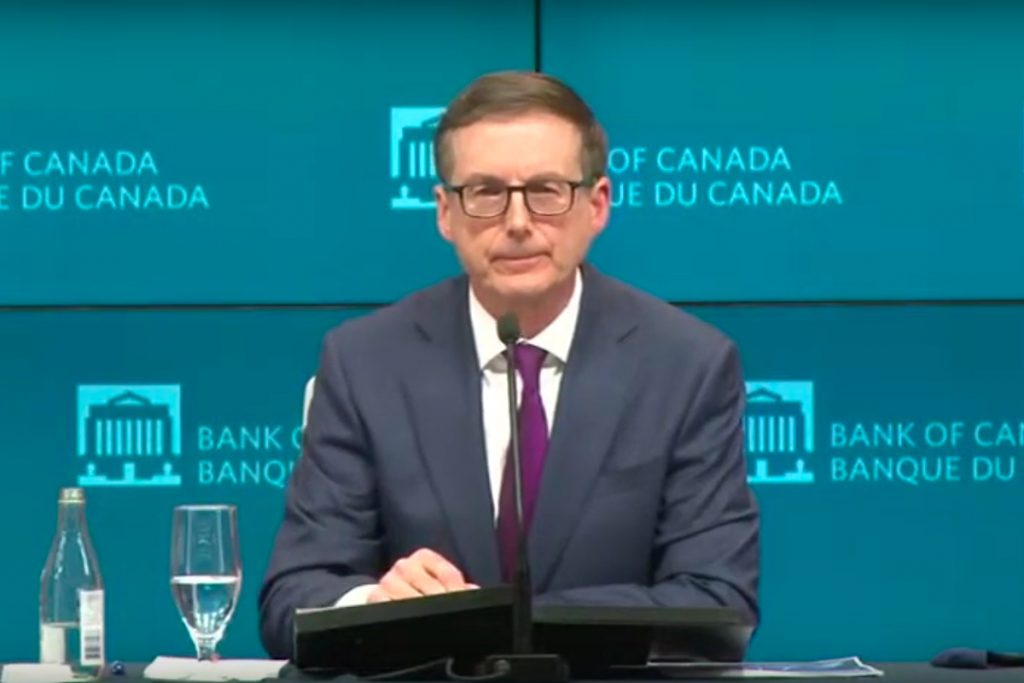 OTTAWA — The Bank of Canada says the national economy will go in reverse for the first quarter of 2021, hammering the hardest-hit workers again on the path to a recovery that rests on the rollout of vaccines.

Workers in high-contact service industries will carry the burden of a new round of lockdowns, which the central bank warns will exacerbate the pandemic’s uneven effects on the labour market.

Governor Tiff Macklem, in his opening remarks at a late-morning news conference, warned the first-quarter decline could be worse than expected if restrictions are tightened or extended.

As a result, the bank announced it is keeping its key interest rate on hold at 0.25 per cent, citing near-term weakness and the “protracted nature of the recovery” in its reasoning.

But the short-term pain is expected to give way to a brighter outlook for the medium-term with vaccines rolling out sooner than the central bank expected.

Still, the bank warns in its updated economic outlook that a complete recovery from COVID-19 will take some time.

Nor does the Bank of Canada see inflation getting back to its two-per-cent target until 2023, one year longer than previously forecast.

“There is clear reason to be more optimistic about the direction of the economy over medium-term. But we are not there yet,” reads part of Macklem’s opening statement.

“The resurgence in COVID-19 cases weighs heavily on the near-term economic outlook. And this underlines the ongoing need for extraordinary fiscal and monetary policies.”

The bank’s latest monetary policy report, which every quarter lays out its expectations for economic growth and inflation, forecasts that COVID-19 caused the economy to contract by 5.5 per cent last year.

Despite an upswing over the summer and fall that may have spared the country from a worst-case economic scenario, the drive to a recovery will hit a pothole over the first three months of 2021.

The bank forecasts real gross domestic product will decline by 2.9 per cent in the first quarter of 2021 compared to the same period in 2020 before improving thereafter if severe restrictions start easing in February.

The bank is forecasting growth of four per cent this year, then 4.8 per cent next year, and finally 2.5 per cent in 2023.

Getting there will be like riding a roller-coaster as the bank warned that resurgence in COVID-19, or new, more virulent strains, could weigh down a recovery in one quarter before leading to strong upswing in the next.

Inflation may be equally rocky.

Gasoline prices, which have weighed down the consumer price index this year, will by March be “well above their lows of a year earlier,” the bank’s report said, even if prices hover around where they are now. That should significantly bump inflation, possibly pushing the headline reading to roughly two per cent in the second quarter.

Separately Wednesday, Statistics Canada reported the annual pace of inflation slowed in December as the consumer price index was up 0.7 per cent compared with a year earlier.

The agency also reported that the average last month of Canada’s three measures for core inflation, which are considered better gauges of underlying price pressures and closely tracked by the Bank of Canada, was 1.57 per cent.

All the numbers in the bank’s lookahead rest on efforts to vaccinate Canadians by the end of the year without any hiccups in that timeline, which would mean broad immunity six months sooner than the bank previously assumed.

The bank says the shorter timeline should mean less scarring overall for the economy in the form of fewer bankruptcies and fewer workers out of jobs for long stretches, which makes it more difficult for them to get back into the labour force.

The long-term unemployment rate, capturing those who have been out of a job for six months or more, reached 2.4 per cent last month, which the central bank noted was a “serious concern” because those workers may eventually drop out of the labour force altogether.

Recent restrictions will harm low-wage workers, who by December had employment levels four-fifths of what they were pre-pandemic, as well as youth and women who are more likely to work in hard-hit sectors like accommodations and food services.

The central bank’s report warned the longer restrictions remain in place, the more difficult it may be for these workers to find new jobs since the majority move to a new job but in the same industry.