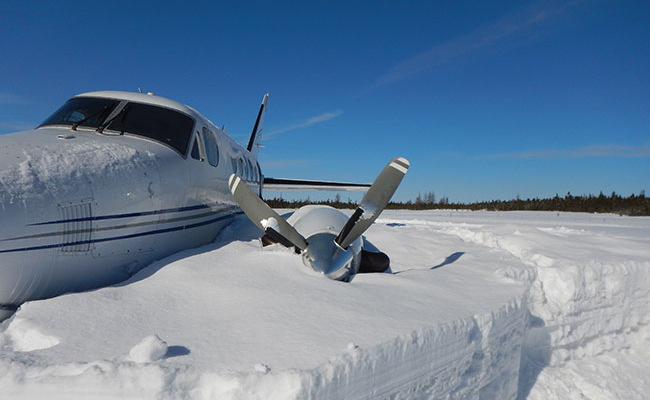 TSB is making two recommendations as a result of its investigation into the 2018 Havre-Saint-Pierre February runway overrun. (Photo: TSB)

On February 26, 2018, a Beechcraft King Air A100 was conducting a charter flight under instrument flight rules from the Sept-Îles Airport, Quebec, to the Havre St-Pierre Airport, Quebec (CYGV). On board were two crewmembers and six passengers. Prior to takeoff, the weather at CYGV indicated light snow and visibility of 3/4 of a (statute) mile, which, although below the one-mile visibility published on the approach chart, was at the minimum limit permitted for the flight. Updated weather however, obtained as the crew began their descent, indicated that visibility had deteriorated to just 1/4 mile in heavy snow – well below the minimum allowed to conduct the approach.

Although the pilot knew the visibility was below the published minimum, according to his interpretation of Canada’s complex approach-ban regulations, he could still conduct the approach. So he descended to the Minimum Descent Altitude and perceived a single visual cue, then decided he could continue the approach safely. But when the aircraft reached the runway, the pilot did not see it. A few seconds later, he saw a small patch of runway, lined up on it, and continued the landing. However, the touchdown point ended up being just 700 feet before the end of the runway and, without enough room to slow down, the aircraft came to a stop in a large snowbank, 220 feet past the end of the runway.

Although there were no serious injuries, the aircraft suffered substantial damage.

Runway overruns, in one form or other, have been on the TSB’s Watchlist of key safety issues since 2010, and the causes and contributing factors of each occurrence vary widely. In this case, the question of “what happened” – an aircraft that landed long in low visibility – was relatively easy to establish. The bigger question – why – is where TSB investigators learned the real safety lesson.

Pilots are trained to be ready with their go/no-go decision once an aircraft reaches the published Minimum Descent Altitude or Decision Height. If they don’t have the required visual reference they conduct a missed approach: climbing to regain altitude and deciding what to do next.

But as we saw in this investigation, that doesn’t always happen.

What’s more, the rules that govern landing in Canada are complex – too complex for ATC to be able to identify which aircraft are not permitted to conduct an approach. Accurately determining if an approach is allowed in Canada involves consulting multiple reference documents and considering a variety of factors. These include an aerodrome’s operational restrictions, which may feature a specific or general visibility limit; and the type of operation being conducted – including, for instance, commercial, commercial with a particular Operations Specification, or private.

The interpretation of these complex landing minima in Canada can, and sometimes does, lead to confusion, with – as we saw in this occurrence – flight crews concluding that they can conduct an approach, when in reality it is prohibited.

To reduce the chances of this type of accident happening again, there need to be safeguards in place. And right now there aren’t enough. In fact, ATC in Canada will clear an aircraft for an approach regardless of the published minima, since the pilot has the sole responsibility for deciding whether to conduct an approach in poor weather.

That’s why the TSB issued two recommendations as part of its investigation report (A18Q0030) into the overrun at CYGV. The first of these, Recommendation A20-01, calls for Transport Canada “to review and simplify operating minima for approaches and landings at Canadian aerodromes.” The second, A20-02, is for Transport Canada “to introduce a mechanism to stop approaches and landings that are actually banned.”

Put another way, the rules have to be simple and clear to everyone. We can’t let pilots “go have a look” and see if they can figure out where the runway is. These approaches must be stopped before they even begin.

Kathy Fox is Chair, Transportation Safety Board of Canada, after being reappointed to serve a second five-year term in 2018.