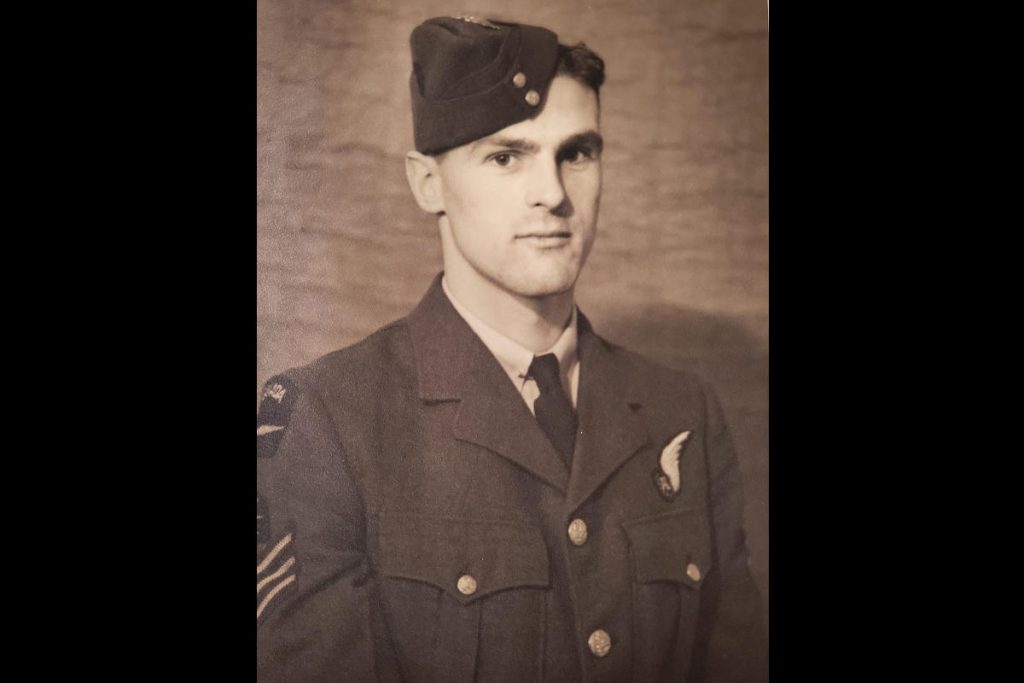 Gordon Piers is a WWII veteran who celebrated his 100th birthday on Nov. 10.

Piers, a Nicola Valley resident, sat down with the Herald to share stories of his wartime service for Remembrance Day.

“I trained in Canada and overseas in England, Africa, India. I was in India for 3 years; I was a wireless operator and air gunner.”

While many troops were being sent to Germany and engaging Nazi soldiers on Europe’s front lines, Piers ended up in a crew of officers who were given a choice of where they wanted to be shipped out to.

“When I retrained in England, the big shots were deciding where crews were going to go,” explained Piers.

“I was a sergeant at that time, but the rest of the crew were officers, so they got the first choice. And they said where do you want to go, Germany or India? And they said India, so that was probably one of the reasons I survived the war.”

Piers completed his training in 1941 and entered service in India.

“I went to Salon first and spent six months doing submarine patrol and then went to a place called Chaklala near Rawalpindi, and our crew helped in training Indians and Gurkha troops,” said Piers.

“I was in the Royal Canadian Air Force, and when they shipped me to India I was attached to the RAF (Royal Air Force) and we were what they called Special Services, I guess the equivalent is OS (Operations Specialist) now. Once a month we would fly to Calcutta and go to a place called Dum Dum, it was called Special Services 1576 flight and we dropped supplies and troops behind the enemy lines, the Japanese lines.”

At home, citizens were warned that `loose lips sink ships’ and `loose talk costs lives’, this was no different overseas where not even the squadron was told where they would be flying until the last minute, in order to keep flight times and routes secret and safe from sabotage or enemy offensives.

“Everything was secret, when we were going to fly behind the lines, we wouldn’t know, they’d tell us the night before, `you’re taking a trip’ because who knows who’s a spy and who isn’t,” said Piers.

As a wireless operator, Piers’ job was to keep in touch with the ground, taking and transmitting orders to the flight crew about where to go and what to do. Occasionally, the plane would get lost or the navigator would become disoriented and Piers would radio the ground for directions, or use a direction finder to take a bearing on a nearby radio source and set a course that way.

“Our worst enemy was the weather,” said Piers.

“We flew in all weather, because we had to keep the troops supplied.”

Piers’ crew suffered one crash landing, in which several of the crew were killed and Piers himself was injured, still bearing the scar on his left arm.

“We crashed once on takeoff,” Piers said.

“The engines quit, and we knew we were going in. There was nothing but jungle, but we landed in a pool of water and the Americans came and got us out, surviving that was pretty scary. They didn’t all survive.”

Being an air gunner, a position that was originally combined with that of wireless operator, was a dangerous job that required hypervigilance, scanning the surrounding skies for enemy aircraft, often at night and for several hours at a time.

“There’s always some chance of enemy aircraft,” said Piers, but he also noted once again that he was luckier in India than those in Europe. While in Salon his crew was tasked with watching for approaching Japanese, who had been ordered to enter India from Singapore. However, for the most part aerial skirmishes with Japanese forces were avoided as Japanese troops entered by land from Burma rather than by air.

Piers also spoke about his life before the war. He was born in Vernon Jubilee Hospital, and moved with his family first to Salmon Arm and then to Haney, in what is now Maple Ridge. During the Great Depression, he left home and went looking for work anywhere he could find it.

“I left home when I was 17, it was in the Dirty Thirties,” said Piers.

“I rode freight trains, did all kinds of different jobs from truck driving, bumming around, I got in the corps of commissionaires.”

Around the age of 18 Piers went to work on homesteads in Celista, BC, which were owned by five brothers who had immigrated from England. After volunteering for training in 1940, Piers requested permission to go back to the homesteads to help with the harvest. When his request was denied, he left anyway. Upon his return he was placed in detention for 28 days. But, when the CO discovered he had gardening experience, he pulled him from detention and put him to work planting geraniums on the base in Calgary.

“He pinned my badge and my wireless sparks on me, and he said, `congratulations Piers, you’re the first person to serve 28 days in the digger and still graduate with your class,” said Piers.

Piers served until the war ended, leaving the military at 25, four years after volunteering. In the postwar years, Piers estimates he had “around 30 different jobs”, one of which was working at the Chilliwack Post Office for 15 years. It was in Chilliwack that he met his wife Helen, who was then a seamstress in New Westminster.

“I met her at a dance in Chilliwack, and the sparks flew right away,” Piers reminisced.

The couple celebrated their 52nd wedding anniversary on Oct. 19, and between them they have five children.

Looking back on a century of living, Piers notes it hasn’t all been easy. During the war he survived not only the rigors of training and combat, but dysentery, dengue fever and jaundice. Later in life he has survived both bladder cancer and an aneurysm. But, still, he’s lived a good life, and he has some wise advice to offer those generations following behind him.

“Sometimes working to get rich isn’t the object, the object is to work at something you enjoy,” he advises.

As well as, “Keep your nose clean and look twice before you leap.”

When asked how someone else might achieve such a long life, he had this to say: “To what do I owe my longevity? One, good genes; two, a good health system; and three, a hell of a lot of luck.”