The Vision, Commitment and Expense of YVRAS. 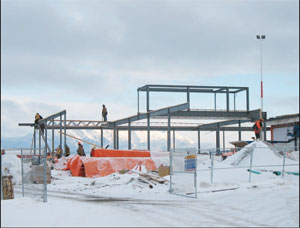 In 1994, Vancouver Airport senior VP and general manager Frank O’Neill
took the fledgling Vancouver Airport Services (YVRAS) into the
international airport services arena to do battle with the airport
giants of the time. Opening for business with just two employees and a
little start-up money from the Vancouver Airport Authority, by 2007
YVRAS had contracts at 18 airports in seven countries handling 27
million passengers per year. In 2006 O’Neill passed the torch to
current CEO George Casey who, with US$400 million revenue under
management, underlines profitability as a key YVRAS target.

Right
from the start, access to capital was the key factor for YVRAS success,
and maintaining access is a high priority. Taking advantage of the
capital invested by YVR in YVRAS, Casey is bringing like-minded
infrastructure investors together to create a new investment group to
pursue global opportunities, particularly in the OECD market. The
bottom line, says Casey, is that YVRAS has been successful in managing
assets to create value and growth, and is looking to leverage that with
like-minded partners. The YVRAS-managed airports have had an injection
of US$1.4 billion in capital expansion since 1995.

Asked why
YVRAS is the only Canadian airport operator that got into the business,
did well and stayed the course, Casey and operations VP Coleen Rogers
(previously VP at Winnipeg International) emphasize three key success
factors:

Vision – in 1994 YVR was visionary in seeing where the
market was going both globally and in Canada. Commitment – YVRAS
committed to seeing it through.

Expertise – an ability to execute projects, combined with the success of YVR as a centre of excellence.

YVRAS
achieved early success, based on a sound bidding strategy, learning
from each bid and paying attention to how other concessions perform.
Building on that foundation it has paced its growth, managing each new
airport to maximize value and increase customer service.

Is the
YVRAS governance model an advantage, allowing freedom of action without
being stalked by predators? Casey and Rogers certainly think so – “it
allows us to operate as a fully commercial entity to pursue
opportunities in North America and abroad. The board works well and
carries out its fiduciary responsibility to ensure that we are a viable
entity.” The Vancouver Airport Authority has been unwavering in its
support, even during the post-9/11 downturn, while YVRAS is
self-sustaining in capital and cash, thanks to the commercial rigour of
the company and the focus on profitability and customer service.

However,
Rogers points out, YVRAS does not get a free ride from its parent –
YVRAS pays the Authority for the services it uses and is focused on
providing a return on capital invested by the Authority.

Asked
to identify the factors for future success, Casey sees YVRAS as being
focused on the OECD market, “but we will look at non-OECD opportunities
as well. We will identify growth opportunities and build on our
successful track record, based on our brand and our operating
philosophy”.

The brand is a key factor for YVRAS customers and
Casey summarizes it as “creating a sense of place and a transfer of
technology to the local environment”. Casey and Rogers cite the YVRAS
success at Nassau as a good example – “we stood out in our application
of our brand and operating philosophy.”

To stay ahead of the
competition YVRAS concentrates on the key business drivers. As Casey
defines it, “we focus on building passenger and cargo traffic and
building cost-effective facilities on time. We have a flexible cost
structure; we maximize nonaeronautical revenues, optimize our financing
capabilities and focus on stakeholder relationships.”

So where
does YVRAS go from here? Casey sees the opportunity to buy bigger
shares of existing airport businesses and to acquire additional
airports and additional shares. At Hamilton ON, YVRAS now has a 100%
shareholding in Trade- Port International Corporation.

“We are
growing the airports we already manage,” says Rogers, “including
investment from the owners – for example, Cranbrook, Kamloops and
Moncton.” YVRAS is managing the Cranbrook terminal building expansion
and extension of the runway to 8,000 feet, making it a potential
destination for long-haul direct flights. This was hard on the heels of
a new terminal building at Fort St. John and the next project will be
Kamloops. Meanwhile, three of the five fastest growing airports in
Canada in 2006 are operated by YVRAS, led by Hamilton with more than
20% growth year on year.

Rogers highlights the “network
synergies” that provide savings by having a number of airports under
management. An example was the presence of the YVRAS marketing director
at the international tourism fair ITB Berlin 2007, helping Moncton,
Hamilton, Cranbrook, Kamloops and other airports to bring in more
German, French, and other tourists.

YVRAS has to manage the
demands of airports spanning time zones from Cyprus to Chile to British
Columbia – and not just upgrades. In the Dominican Republic, with local
partners in the Aerodom consortium, YVRAS manages six airports
including Las Americas International serving the capital, Santo
Domingo. The development of the new Samana airport on a greenfield site
at El Catey on the north coast tested the skill and know-how of YVRAS
senior operations director Colin Lowndes and Aerodom operations
director Andrew O’Brian. Despite the logistic challenges, the airport
with its 3,000-metre runway opened on time, with the first flight
arriving from Germany on Nov. 6, 2006.

Lowndes and O’Brian
typify the cosmopolitan experience of the people who keep the YVRAS
airports running 24/7. Both Canadians, they speak fluent Spanish and
worked overseas before joining YVRAS.

Latest airport in the
YVRAS portfolio is Nassau, with a 10-year contract to manage Lynden
Pindling Airport for Nassau Airport Development Corporation. YVRAS
broke new ground in Nassau, as Casey explains: “We made a strategic
decision to bid on our own with no partners, and won.” YVRAS placed the
executive expatriate team in Nassau, headed by Craig Richmond
(previously VP Operations at Vancouver International) and has trained
local employees at Vancouver. Richmond is managing the US$300-million
capital expansion project and, in his own words “has a vision to
transform Nassau Airport into the jewel of the Caribbean.”

Cyprus
is an exciting challenge for Casey and the YVRAS team – a European
opportunity with multinational partners in a $600-million, 25-year
build, operate and transfer concession. It is the largest financing
undertaken by YVRAS, with local partners and an international team that
includes French construction giant Bouygues and ‘Celtic tiger’ Aer
Rianta International (a.k.a. Dublin Airport). The three-year bidding
process for Larnaca and Paphos airports was, Casey reflects, “an
excellent experience based on cultural adaptability and involving all
our strengths.” Cyprus tested the bidders’ strengths to the full.
Discussions began in 2001 and the Hermes Airports Ltd. team, led by
Bouygues, YVRAS, Egis Projects and Cyprus Trading Corp., achieved
success in 2005. Within two months of the transfer, Larnaca and Paphos
handled 50,000 refugees from Lebanon, during what was already a peak
traffic period.

Casey sees China and India as potential
opportunities – the latter following the privatization of Mumbai
(Bombay) and Delhi airports in 2006 – but remains focused on management
of the risks associated with growth. The success by Frankfurt Airport
at Delhi and Airports Corporation of South Africa at Mumbai came after
a long and expensive period of bidding against major international
players such as BAA and Macquarie and was immediately followed by a
nationwide strike of airport workers protesting privatization. YVRAS is
keeping its eye on Chennai (Madras) and Kolkata (Calcutta) where the
Indian government is planning to go the same route and where lessons
will be learned from Mumbai and Delhi.

“The key to success is to
manage your way through the fluctuations in the business,” says Casey.
“We will look for expansion to the UK and continental Europe and
possibly in the US – Chicago Midway comes to mind. We may look at Asia,
including India, but that will depend on access to capital – our key
focus at present is east and south.”